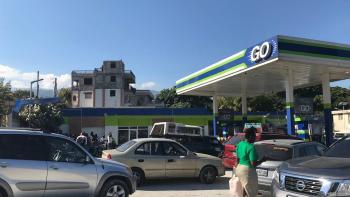 As Haiti’s largest mobile-phone provider, Digicel burns about 650,000 gallons of diesel a month to keep its cellphone towers running and the lights on in all of its buildings, including the $45 million Marriott hotel, which it operates in Port-au-Prince.

So when a raging fuel shortage headed into its third week on Tuesday, the Port-au-Prince chairman and CEO of the multinational telecom company took to Twitter to let his frustrations be heard.

“Three gas companies are out of stock. All companies will be out of stock of diesel in 3 days. Crisis repeated! Who benefits from the crime? Novum? @bmpadhaiti? ” Maarten Boute tweeted, referring to the company that has fuel on ships off the Haitian coast and the Haitian agency that buys fuel for the country.

Instead of responding to Boute, Haiti’s government slapped him with a summons to appear before the Port-au-Prince chief prosecutor to explain himself. The move immediately drew criticisms of government intimidation from people on social media, and further enraged others over the country’s ongoing fuel shortage.

“I will present myself,” Boute said. “[But] there is no legislation in Haiti that allows [the prosecutor] to do any of this and I don’t believe anything in my tweet was provocation. I asked a simple question; I am simply asking when will it be solved because it’s impacting our operations.”

Not only are customers in some parts of the country experiencing spotty service but the fuel shortage is drastically increasing his company’s cost of operations, said the executive, who estimates that the company has about six to seven days of fuel left in reserves..

“We have considerable villages and towns that we cannot serve,” Boute said. “It has an impact on our customer satisfaction because people blame Digicel, not the government or the [fuel companies], and it has a negative impact on our brand. ... The uncertainty it is creating is not necessary; we don’t need this right now in Haiti.”

Ignace Saint-Fleur, the head of the government agency that controls Haiti’s fuel import market, the Bureau of Monetization of Programs and Development Aid, or BMPAD, said Thursday he expects the crisis to be resolved within the next few days.

Saint-Fleur told the Miami Herald that the government paid some of the money owed to the company — U.S.-based Novum Energy — that has two of the three fuel ships in waters off Port-au-Prince waiting to offload. The 164,000 barrels of gasoline and 205,000 barrels of diesel, however, are only enough to sustain the country for 23 and 17 days, respectively, Saint-Flueur acknowledged.

“We have made a lot of efforts to put certain amount of money ... to unblock the fuel,” Saint-Fleur said.

But with so many previous promises of fuel being available, many are taking a wait-and-see attitude, and say it is only a temporary fix to a repeated problem ever since Venezuela stopped providing Haiti with discounted petroleum products. The move has meant that Haiti now has to purchase fuel from the U.S. market.

On Friday, lines were still long at some gas stations in the capital as drivers waited patiently for their turn at the pump despite BMPAD’s announcement that fuel was being restocked.

The latest fuel shortage crisis began last month when drivers found themselves ambling from pump to pump at gas stations around Haiti searching for diesel or gasoline to fill up their vehicles and diesel-operated generators.

In the early days of the shortage, drivers were limited to no more than $12.76 worth of fuel, as nervous gas stations operators rationed gas and diesel. But as the shortage intensified, many gas station operators were left with no other choice but to lock up their pumps with chains or leave stations void of workers.

“My members are telling me that they are placing their orders but they have not received their fuel,” said David Turnier, president of the National Association of Petroleum Distributors, which represents the 300 or so gas stations around Haiti. “They have been told there is no fuel at the depot and they are waiting for the next shipment.”

As a consequence, most of the gas stations in Petionville, where many of the luxury hotels and restaurants are located, were out of fuel on Thursday. The closest fuel available appeared to have been 30 minutes north of the city in the Boisverna neighborhood of Port-au-Prince. Two stations, National and Sol, still had fuel. But National only had diesel, and Sol only had gas. There was a long line of at both. The story was the same in northern cities like Saint-Michel-de-l’Attalaye and Cap-Haitien, where residents reported that stations had no fuel, and none appeared to be coming.

“We are in the business to sell, not to be closed,” Turnier said. “We are losing money, we have employees to pay. It’s a big problem.”

Turnier said his biggest concern with the shortage is the security problem that it presents as long lines form at stations and tempers flare.

“We are on the front lines. People think that we are the ones ordering the fuel and bringing it into the country and we are not,” he said.

The shortage is having another impact: blackouts.

Dimitri Vorbe, whose company, Sogener, sells electricity to government-owned public utility Electricité d’Haïti or EDH, said due to the lack of diesel he has had to cut back on the company’s output from 50 megawatts to 15. Add the outages implemented by EDH and the fact that the Péligre Dam, which generates power, is currently dry, and some areas are now averaging maybe six hours of electricity per day while others have none.

This was the case along Route de Frères, where one homeowner reported going on her fifth day without electricity on Thursday. She wasn’t the only one.

“EDH hasn’t been giving much if any power for days,” Amy Long, who lives in Haiti, tweeted. “Folks in Gonaives and St Marc are reporting no power in about 2 wks. Delmas 75 is getting maybe a couple hours a night. Lots of people in other areas reporting similar things.”

Long noted that the blackouts fall far short of President Jovenel Moïse’s promise to provide Haiti with 24-7 electricity — a promise he made as far back as June 2017 during a Miami town hall meeting and repeated this summer as he responded to fuel riots sparked by a hike in prices. The unrest forced the cancellation of U.S. flights and shut the country down for days even after the government announced a temporary suspension of the measure.

“It’s only gotten worse since then,” Long said. “Hoping for some information on why.”

Haiti’s private sector is also searching for answers. On Thursday it issued a press release calling on the government to do away with the current structure where fuel distributors in Haiti are required to purchase fuel through BMPAD and Novum, the two companies cited by Boute in his tweet. (In 2017 when three fuel distributors circumvented BMPAD and ordered petroleum on their own, the government labeled them “a menace” to the country’s national security and ordered their arrest while confiscating their fuel ship).

Under a January 2018 presidential order, only BMPAD can import fuel. And because it has exceeded its credit with Novum Energy, which has won the recent purchasing bids, Haiti is required to provide cash on delivery when the ships arrive. Thus, three ships have been sitting out in the bay of Port-au-Prince for some time now, stocked with gas and diesel, but unable to offload.

The cost to the government has been at least $20,000 a day per ship in penalties, Saint-Fleur acknowledged, saying he didn’t know the full amount offhand..

“The only way they will solve this problem is to let the companies authorized to distribute fuel in Haiti import directly,” said Frantz Bernard Craan, the coordinator of the Private Sector Economic Forum and president of the Chamber of Commerce of Haiti Industry. “Second, we feel that the prices charged to customers at the pump should follow the law.”

In 1995, Haiti passed a law requiring the state to modify pump prices whenever the cost of fuel changed by at least 5 percent. But rather than follow the law, the country has been artificially keeping prices low. This summer when the government attempted to do away with the subsidy by raising the price of fuel by as much as 51 percent for kerosene, the population revolted, with days of civil unrest and rioting.

In a Jan. 11 letter addressed to Craan in his role as Chamber president, Haitian Finance Minister Ronald Decembre said the government is seeking to involve the private sector in coming up with a solution to the country’s fuel problems.

“The country imports an average of 25 million gallons of fuel per month for $78.5 million,” he said.

But the solution that Decembre seems to argue in his letter is for help with raising pump prices. He provides five pages worth of historical data on Haiti’s fuel woes, including a study showing that between 1998 and 2007 Haiti increased the number of vehicles by 88 percent. Today, there are an estimated 700,000 vehicles in the country, Decembre said.

Craan said that while the private sector believes Haiti can’t continue to subsidize fuel prices, it is not the business community’s role to do the government’s job. One thing is clear, he said: The ongoing fuel crisis is creating instability.

“We cannot even predict what is going to happen,” Craan said. “What people are doing now... whatever they can find and stockpiling. They are creating a black market; gas prices are going up in some regions of the north. A gallon of diesel is now at 750 gourdes, almost $10, when the price should be around $4 a gallon.”

Pushing back on criticism that his agency’s monopoly and poor management of its finances are to blame for the fuel shortage crisis, Saint-Fleur said BMPAD doesn’t request fuel on its behalf or even on behalf of the Haitian government. It does so on behalf of the half-dozen or so companies that distribute to gas stations. Every month the companies submit their fuel needs and BMPAD makes the request with the purchasing company selected through a bid. The winner of that bid in most of the cases has been Novum Energy, which did not respond to a request for comment.

“We do an open and transparent bid,” Saint-Fleur said. “BMPAD requests the fuel and then gives it to them. They have 45 days to pay BMPAD the money in U.S dollars, and that money goes to pay the companies in the U.S.”

Saint-Fleur said most of the Haitian companies, however, have refused to pay their bill and today BMPAD is owed more than $78 million by five of the fuel companies, with one company owing as much as $37 million. Only one, he said, has actually paid its bill.

While the companies have not disputed the amount owed, they have objected to BMPAD’s request that payment be made in U.S. dollars when they are doing business in the local currency, gourdes.

Haiti’s ongoing economic and financial crisis has led to a spiraling devaluation of its domestic currency. Complicating matters further was the government’s decision last year that all transactions be made in gourdes. The order has since been rescinded, but not before the domestic currency further depreciated..

Saint-Fleur seems to be unfazed, however, by any of this.

“Since 2007, they were paying in U.S. dollars,” he said of the fuel companies. “Now they want to pay in gourdes. You can’t pay for petroleum products in gourdes because we don’t buy in gourdes.”

If the business community wants to end its monopoly, he said it “should go back to Parliament and seek a modification in the law. Today people are saying they don’t have U.S. dollars to pay what they owe. Well, BMPAD has one question: Where are they going to find the dollars to pay for the demands that they make on their own?”