What's going on with the new armored vehicles of the PNH? 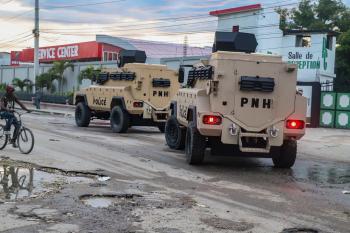 The Nouvellist has learned that the new armored vehicles manufactured in Canada and delivered to Haiti in mid-October are already facing problems.

Last Saturday, while the National Police (PNH) were battling the FRG9 who had blocked access to the Varreux terminal, a video of a damaged armored vehicle being towed was seen online by many social media users.

In another video, we can see one of the brand new armored personnel carriers of the PNH releasing large plume of smoke from its exhaust pipe.

The executive director of RNDDH, Pierre Espérance, told Le Nouvelliste that these armored vehicles are encountering problems. "They are experiencing problems with the braking system. Some parts are not well protected against bullets."

Pierre Espérance added: "Two armored vehicles have already broken down, including a breakdown which occurred last Saturday in Varreux and another in Savane Pistache this Thursday during a law enforcement operation to hunt bandits who wanted to occupy the sub-police station in that zone".

According to Espérance, these problem have an impact on the interventions of the police. He also indicated that out of 18 armored vehicles ordered by the Haitian State, only 3 were delivered. To this are added two others which were commissioned during the administration of Léon Charles.

Are these armored vehicles appropriate?

According to Pierre Espérance, these new armored vehicles are intended for the maintenance of order. He pointed out that the police need appropriate armor to penetrate the neighborhoods and face the possible dangers.

Asked last July about the specifics of the equipment, the Canadian ambassador did not wish to explain. "It's a business operation. I cannot go into details. We are more in the transport of troops. We are not in assault tanks with turrets. We focused on the protection of members of the PNH, “he said. “In addition, these vehicles are part of the solution, but not the whole solution. The PNH will not be able to take back Martissant the day after the delivery of the vehicles,” added the Canadian Ambassador to Haiti, Sébastien Carrière.