When mining companies work abroad, should justice follow them home? 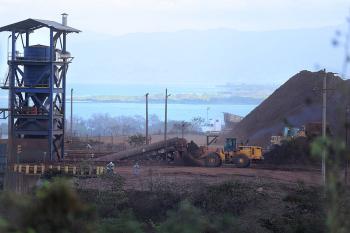 A view of the mining operation, now operated by the Compania Guatemalteca de Niquel, near El Estor, Guatemala.

Growing up, Irma Yolanda Choc Cac recalls hearing stories about the government-backed violence that tore apart her verdant, mountainous community of Lote Ocho. Her grandparents were killed there during Guatemala’s 36-year civil war, which took the lives of 200,000 people – most of them indigenous, like the Maya Q’eqchi residents where Ms. Choc Cac lives.

“I always thought, ‘How did that happen? If I’m ever in a situation like that, I will fight back,’” she says through a Q’eqchi’ interpreter, sitting by the calm waters of Lake Izabal in eastern Guatemala.

Since 2007, that pledge to stand up for her heritage and land has been put to the test.

Ms. Choc Cac and 10 women from her subsistence-farming community say they were gang-raped by police, military, and security personnel from the nearby Canadian-owned nickel mine as they were evicted from their ancestral lands outside El Estor. After the rapes – some of which the women say occurred in front of their children – their homes and belongings were burned to the ground.

“We were left without anything, sleeping under the mountains,” Ms. Choc Cac says, tugging on her purple woven huipil tunic. She never considered herself an activist: married at 14, she didn’t study, and says she lived a “traditional life like my mother and grandmother before me,” growing corn and beans and tending to animals.

But today, her battle on this patch of land in Guatemala is one of several cases pushing through the Canadian justice system, with the potential to set groundbreaking precedents on what responsibility Canadian headquarters bear for subsidiary operations on the ground.

Accusations abound of international companies behaving abroad in ways that would not be tolerated on their home turf, from the targeting of high-profile environmental activists, to widespread intimidation in resource-rich communities, particularly in places with weak justice systems. Often, a string of subsidiaries separate the parent company from day-to-day operations, further complicating legal responsibility. But today’s cases are shifting expectations – both at home and abroad – about holding foreign companies to account for allegations of abuse and negligence outside their borders.

Canada is home to almost half the world’s publicly listed mining and exploration companies – meaning the country’s legal resolution will have consequences around the world. Canadian mining operations are present in more than 100 nations, according to government statistics.

The cases come as shareholders and consumers have been pressing companies for more ethical practices. But these cases are also raising questions, from Canadian judges to rural Guatemalan communities, about current disparities regarding what’s lawful and acceptable.

“You’re starting now to see the lawyers ... understand how the Canadian system deals with human rights and consultation and comparing that to the Guatemalan approach,” says Joe Fiorante, the lawyer for plaintiffs in two of the three cases moving through Canada’s justice system. More people are asking, “If Canada has rules to protect their indigenous people or give them proper consultation, why would indigenous Guatemalans have fewer rights when they’re dealing with a Canadian mining company?”

Canadian mining firms account for 40 percent of large mining operations in Latin America, and there have long been accusations of abuse at their operations on the ground. But conflicts have grown as exploration has intensified, says Shin Imai, a law professor at York University and director of the Justice and Corporate Accountability Project. Mining Association of Canada (MAC) figures from 2017 show that Canadian direct investment in mining abroad more than tripled from 1999 to 2016. From 2000 to 2015, meanwhile, there were alleged cases of violence and criminal acts involving 28 Canadian mining companies in Latin America, including 44 deaths and 403 injuries, according to tallies by Professor Imai’s group.

A decade ago, Canadian courts were reluctant to try these cases domestically, says Ian Binnie, a former Canadian Supreme Court justice whom lawyers cite as an influence on their arguments about accountability.

“There is a much bigger sense [today] of the interconnectedness of the world and its legal systems,” says Justice Binnie. “I think that the judges are becoming more sensitive to the fact that if they refuse jurisdiction in Canada, assuming the head office is here, that these people won’t have any redress and will be left without a remedy, even though clearly in most of these cases there’s no doubt at all that severe damage was inflicted on the claimants.”

“I think no judge really wants to turn people away from the court knowing they have nowhere else to go,” he adds.

That’s relevant in Guatemala today, where impunity hovers around 98 percent for femicide and 70 percent for homicides overall. A United Nations-backed anti-corruption investigatory group, CICIG, was created in 2006 to weed out some of the hardest-to-tackle corruption cases within the government, military, and organized crime. There were high hopes that it could finally root out systemic corruption and be replicated across the region. In recent years, however, the president and business community have attempted to expel it from Guatemala.

“I can’t speak Spanish or read or write, but just because [the mining company] is educated and prepared doesn’t mean my voice should be silenced,” says Ms. Choc Cac.

“I have a lot of confidence in the Canadian justice system,” she adds. “First of all, they are hearing our voices and our stories. They took on our case. Here in Guatemala, my voice isn’t heard. We’ve seen over and over that indigenous communities don’t get justice.”

When she traveled to Toronto in 2017 to share her story with the court – her first time on a plane – the trip “was really hard,” she recalls.

In the end, “it felt good to give my testimony. But to remember everything is to live it again. It affected me a lot: I got dizzy, it was hard to breathe. But I shared my story, and in its own way that takes away some of the shame.”

Proceedings against three Canadian companies have been breaking new legal ground as they wind through the system. Hudbay Minerals faces three distinct cases, including Ms. Choc Cac’s. (At the time of the alleged rapes, the mine was owned by Canada-based Skye Resources. Hudbay took over the company in 2008.) Another case alleges that security personnel at Tahoe Resources, in another part of Guatemala, opened fire on demonstrations in 2013. The British Columbia Court of Appeal ruled that the case could proceed in Canada, and it is now before the trial court there. In 2017, Guatemala’s highest court suspended the company’s mining operations in the community, finding that it hadn’t properly consulted with indigenous communities.

A third case involves Nevsun Resources Ltd., which has been sued for alleged complicity in a government subcontractor’s use of forced labor at a mine in Eritrea, worked by conscripts in the repressive country’s national service system. The Supreme Court of Canada is weighing whether Canadian courts should recognize civil claims based on breaches of customary international law, and whether the case can proceed – which Nevsun lawyers argue would violate sovereignty of the Eritrean state. The decision, expected later this year, is widely anticipated for its ramifications for any Canadian firm dealing abroad, not just extractive industries.

Cory Wanless, a lawyer who represents the plaintiffs against Hudbay, says that corporations cannot rely on old arguments about being divorced from subsidiaries operating on the ground.

The mining industry is part of Canada’s national identity, employing more than 400,000 workers directly and almost 200,000 indirectly. And while a 2018 review from the University of Ottawa showed Canadian mining companies to be slightly more socially responsible than other foreign firms operating in the region, conflict has still marred their image, says Mr. Fiorante.

“There is a perception that Canadian companies would, all other things being equal, be presumed to be more socially and environmentally responsible because they’re Canadian,” he says. “These cases challenge the notion that Canadian mining companies are at the forefront of environmental and social responsibility by shining a light on the cases where they are credibly involved in some very serious allegations of human rights abuses.”

The Canadian government has responded to pressure for better business conduct abroad by creating a new ombudsman position last January. They did not name someone to the position, however, until this April, more than a year later.

Many are concerned that the office does not have a sufficient mandate to investigate abuses.

“They want what they call joint investigation, so the company has to agree to the investigations,” says Professor Imai, from York University, of mining companies. “It’s like saying ‘OK, you can investigate the murder, but only if the person accused of murder agrees.’ ”

‘We could defend ourselves’

Benjamin Castillo, a local fisherman and boat captain, cuts through the water of Lake Izabal with his small lancha, moving toward a billow of smoke on shore.

“All of this belongs to the company,” he says, sweeping his arm across the horizon, gesturing to a lush, green mountain range with periodic bare spots unearthed by mining.

When the mining company moved in the 1960s, it paid good salaries and was well received, Mr. Castillo says. Operations shuttered during the civil war, and when rumors floated in the early 2000s of the mine’s return, many locals had positive expectations.

“This time was different. Trouble started,” he says. He mentions environmental damage and low wages, though he hasn’t heard of many serious human rights violations.

But as the trio of cases work their way through courts, they are influencing mindsets here, some activists say.

María Magdalena Cuc Choc, a community leader and human rights activist, says she was forcibly evicted and lost her brother-in-law at the hands of the mining firm in her area of El Estor.

In my neighborhood, “We were very organized. We knew how to respond” to the mining company, says Ms. Cuc Choc, who speaks Q’eqchi’ and Spanish. “We could defend ourselves – we had families that speak and understand Spanish. But it made me wonder what was happening in these communities that were further afield.” After visiting rural communities like Lote Ocho, she realized the abuses she and her neighbors suffered were the tip of the iceberg.

To some extent, she thinks, the Guatemalan government and international companies here bank on interacting with populations that aren’t aware of their rights and don’t have much of a voice in the Spanish-language justice system, like the women of Lote Ocho.

“If I hadn’t gone to Lote Ocho, I don’t know that these abuses ever would have been discovered,” she says. Most of the women were ashamed by what had happened to them. And their distance from police stations and judges’ chambers – literally and figuratively – meant they put little faith in securing justice through the government.

Access to health care and education are still extremely low in indigenous communities in Guatemala, but Ms. Cuc Choc feels hopeful that the Hudbay case is a sign of progress.

“If these women win this case, it will give a green light for other communities and for other countries that suffer the same thing we’re suffering to stand up and say ‘Enough!’ ” Ms. Cuc Choc says. “You can’t trample on our rights.”