Where is the Reporting on PetroCaribe? 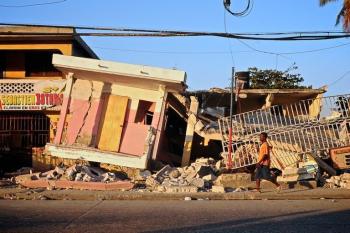 January 12 marks ten years since Haiti’s deadly earthquake. Usually, Haiti appears in international news when there’s a scandal, a disaster, violence. There was a flurry of coverage in October when daily protests, begun with a nine-week general strike – in Haitian Creole, peyi lòk – met with government repression, including the death of three journalists. The mobilization has been ongoing since July 2018, leading to a partial report naming high-ranking government officials of mismanagement of PetroCaribe funds published at the end of May 2019.

Most articles are without context, many led by images of burning tires that, to foreign capitalist press, represents violence. The first independent Black nation, Haiti has always suffered under white supremacist and racist ideology. Other mobilizations such as Yellow Vests in France can engage the same tactic, but in the minds of imperialist countries’ media and leaders, white activists are “mobilizing” while Black ones “commit violence.”

Suddenly, after a few individual stories, Haiti disappeared again from the international press. It’s almost as if Haiti is no longer here. But the ghost of “violence” still haunts people who saw or heard the news.

But Haiti is here. And it will be here. And Haitian people are still pushing back against the State that serves the interests of dominant classes and imperialist countries, the “Core Group.”[1]

People are not only marching in the streets, they are also thinking, analyzing, denouncing, posing solutions, dreaming of another Haiti, another relationship with the world system. We write this series of articles to amplify the voices of people who are analyzing the current situation and are trying to find the path to another Haiti. In this series of articles, we try to diversify people’s voices, analyses, realities, and demands.

This short introductory test begins to situate where the PetroCaribe mobilization originated. Consult the article that the Kolektif Anakawona wrote for more details.

PetroChallengers represent several segments of society, including youth and Diaspora actors. Middle-class residents of Delmas, a suburb of Port-au-Prince, or the Diaspora became involved. However, the movement is a people’s struggle. The movement is not without its contradictions, with politicians positioning themselves as “leaders.” Some are named in the PetroCaribe scandal. Some of the wealthiest bourgeois in the country attempt to weaponize this momentum.

The meeting that concluded on June 19 with some Organization of American States (OAS) representatives highlighted that the dominant countries in the region, certainly the U.S., still support President Jovenel Moïse for the moment. Moïse was elected during a round of elections canceled because of corruption spanning 2015-17. OAS and Core Group rushed to accept the election results. In the second round, with a 21% voter turnout, Moïse was finally elected.

Moïse is the heir apparent to President Michel Martelly, who came to power in 2011 with the strong hand of Secretary of State Hillary Clinton, when her husband former U.S. President Bill Clinton was at the same time UN Special Envoy, President of the Clinton Foundation, and co-President of the Interim Haiti Reconstruction Commission (IHRC). Martelly, who was elected with a single Deputy (equivalent to U.S. Representative) from his party Parti Haitien Tèt Kale (Haitian Party of Baldheads, PHTK), consolidated his power thanks to the Clintons’ intervention. Martelly managed the large flows of money for Haiti reconstruction and humanitarian aid, under the control of the IHRC for a while and the UN mission, MINUSTAH.

This context is important to remember. Without this context, the PetroCaribe scandal plays into the hands of Trump, who called the country that did away with slavery a “shithole.” Most foreign capitalist media speak about “corruption in Haiti” as a product of the Haitian state and people on their own, wherein Haiti can’t manage or govern. It’s the same racist discourse Haiti has faced for a long time, which justified a “humanitarian occupation” or the “Republic of NGOs.”

Secondly, most of the $4.2 billion in PetroCaribe funds was done under the control of the Clintons, the “King and Queen of Haiti.” The Clintons’ disaster capitalism in Haiti played a role in Trump’s election in Florida.[2]

Finally, Washington is attempting a coup d’état in Venezuela to replace President Nicolas Maduro with Juan Guaidó, close to right-wing networks. President Hugo Chavez created PetroCaribe in 2005. It is a project of solidarity between peoples, another alternative for development. Haiti received PetroCaribe funds in 2008, after 4 hurricanes had stricken. Haiti had tried to maintain the delicate balance of friendly relations with the U.S. and its allies on the one hand, Venezuela and its allies on the other.

The PetroCaribe scandal underscores not only the contradictions of the neocolonial PHTK state but the hypocrisy of U.S. foreign policy. At the same time that the U.S. is calling to respect Haiti’s presidential elections it is pushing the reverse in Venezuela. The two countries’ destinies are intertwined. Since 2017, the U.S. imposed an embargo on Venezuela, freezing assets. Consequently, PetroCaribe’s gas subsidies had to stop. Two serious impacts of the embargo were the rise in gas prices and the collapse of the value of Haiti’s currency, the gourde: on January 11, 2018, it was less than 65 gourdes to the dollar, but today it is more than 93.

Faced with U.S. maneuvering in Venezuela, President Jovenel Moïse was forced to pick a side. No surprise, the former director of Agritrans, who received funding from the U.S., chose to cut Haiti’s historic ties with Venezuela[3] in the OAS meeting on January 2019. June 27, right after the last OAS meeting, President Moïse gave a final gift to the Core Group, authorizing a new UN mission. A previous mission, MINUSTAH, lasted over 13 years and was responsible for bringing cholera and a wave of unpunished sexual assaults.

But in this game, President Moïse forgot the Haitian people. On July 6 of last year, during the Brazil match in the World Cup, he applied the International Monetary Fund’s (IMF) policy to increase gas prices. The people barricaded the streets all over the country. Haiti was locked down for the following two days, which shocked and scared the bourgeoisie and imperialist powers.

But the people weren’t done speaking. In a campaign on Twitter, August 2018, a challenge was launched: “where is the money from PetroCaribe”? Kòt kòb PetwoKaribe a?

And every symbolic date, like October 17, the assassination of country founder Dessalines; November 18, the last battle in Haitian independence; February 7, when the people uprooted the Duvalier dictatorship, the mobilization got stronger.

Without this mobilization in the streets, the Superior Appeals Court wouldn’t have published these reports.

Where did the mobilization come from and in what context? We will get to this question shortly…

Like Marx wrote in the 18th Brumaire, people can make history but within historical conditions they cannot create.

Note: most links are to articles written in Haiti, which can be accessed via Google Translate, etc.

Mark Schuller is Associate Professor of Anthropology and Nonprofit and NGO Studies at Northern Illinois University and affiliate at the Faculté d’Ethnologie, l’Université d’État d’Haïti. He is the author or co-editor of seven books, including Humanitarian Aftershocks in Haiti. Schuller is co-director / co-producer of documentary Poto Mitan: Haitian Women, Pillars of the Global Economy (2009), and active in several solidarity efforts.