Who benefits from the poor management of the Truitier landfill? 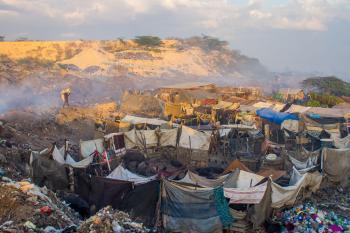 Some 200 desperate people live in flimsy shelters made of cloth and wood at Truitier, where they forage through garbage for food and valuables. Credit: Milo Milfort

Created in the 1980s on 618 acres of land, Port-au-Prince’s only public dump is located in Truitier in the municipality of Cité Soleil, 5 km north of the capital’s center. It serves the megalopolis of Port-au-Prince, which has no less than seven municipalities.

Here, the working and living conditions are inhuman. Both ragpickers and wage earners –  as well as residents of the area and surrounding areas – are continually exposed to smoke, mosquitoes, vermin, rats, goats, and fat pigs. Some 200 desperate people live at Truitier, where they forage through garbage for food and valuables.

“The dump is not just treated like a poor relative, it's worse than that,” complains civil engineer Sofia Seignon, the general director of the country's only official landfill since May 2017. “It is in a critical state."

For Seignon, a genuine dump should be well-equipped with at least a dozen items available to prepare the ground, deposit the waste, and arrange and protect dumping spaces: at least 2 bulldozers, 1 backhoe, 1 power shovel, 1 dragline bucket, 1 water tanker, 1 compactor, and biodegradable netting.

"Here, there is nothing like that,” she says. “We have few means, and we are not autonomous." The problem is that the employees are not paid by the Cité Soleil town hall, but rather by the Metropolitan Service for Collecting Solid Waste (SMCRS).

Almost all of the equipment there is not working due to lack of maintenance for many years. And an improvement hardly seems imminent. The landfill has no budget and works thanks to the good will of SMCRS – the state entity responsible for collecting waste – which administratively manages it.

It's only the meager SMCRS budget that allows the dump to stay open.

The last investments in the landfill date back to the aftermath of the January 2010 earthquake. They were granted by international institutions such as Ceres, the Inter-American Development Bank (IDB), and the UN mission.

Currently, the site has no signs of improvement. It has no landfill netting, no drainage system, no methane management device, no waste separation.

Nonetheless, "Truitier is profitable,” declares Sophia Seignon, the national dump’s director. “The problem is that other players make money with the site. There is the city hall of Cité Soleil which taxes the private companies that use it. The SMCRS does not even receive one cent. This, despite meetings and conferences held with [the Cité Soleil city hall] on what should be done."

The annual production of solid waste is estimated at 30,000 tons whereas garbage represents 912,500 tons, according to figures put forward by Haitian officials. In Port-au-Prince, the average amount of waste generated is estimated at 6,000 cubic meters per day. Only 30% are collected. The rest is randomly dumped, especially into ravines and streets.

The current landfill rate is about 800 tons per day. The impoverished people living at the dump incinerate part of the waste collected, without thinking about the impact on their quality of life.

No institution coordinates or controls waste management. It does not follow a coherent and planned strategy. Thus, it is shown to be ineffective or even absent in some regions of the country due to lack of capacity, resources, and conclusive progress in the management and modernization of the sector.

"The many interventions made by state institutions and private initiatives have so far proved insufficient to properly carry out garbage collection," said Dieuseul Simon Desras in June 2016, before he became Environment Minister.

Given the poor quality of public services responsible for collecting, treating, and disposing of waste, private sector actors and the world of national and international NGOs are taking over.

Jedco Services S.A. is a company which specializes, among other things, in pest control, garbage collection, latrine cleaning, and rubble removal. It depends on and has used the landfill for many years. The company's officials are very much at odds with the Cité Soleil town hall.

"We are not at all satisfied with the service,” complains a company executive who says Jedco must constantly purchase new tires. “The problem is that they do not take care of the site. They do not clean it. Getting into it is not easy. The tires on our trucks are often punctured, and we have to buy new ones all the time to replace them, which is a real problem for us."

With regard to this situation, he says that his company has had negotiations and discussions with the Cité Soleil mayor’s office aimed at reducing taxes. "It did not come to anything,” said one person who has worked in the company for seven years . “They don’t care about us. It's as if we are working for them while they are resting on their laurels."

Meanwhile, Terry Boucard, Assistant Director of Boucard Pest Control, which uses the landfill to dump his garbage (organic waste - paper and metals) since the 1990s, believes that the site is essential for his company.

"Everything that we pick up, we dump at Truitier,” she says. “There is not a memorandum of understanding, even less a formal contract, that binds us to the Cité Soleil town hall. But we’ve had some meetings with the SMCRS on the conditions and where to deposit the waste. However, the bills come from the mayor’s office, which charges us 25 gourdes ($ 0.40) per cubic meter."

She says the situation is complicated.

Because there is no memorandum of understanding where terms are fixed, the mayor’s office may unilaterally decide what to do. "Sometimes, they sends you bills for 2-3 months to pay in advance," complains Boucard.

Does this mean that the city council plans in advance the amount of waste that a company will discharge?

Moreover, the quantity dumped depends on the period and the current season. Faced with the landfill’s inability to operate without outside help, the head of Boucard advocates for a public/private partnership to manage it.

"It does not work better than with aid, and we will not keep receiving it our whole life," she says.

Worse, the landfill’s mismanagement disturbs her, since her company relies on it to dump their garbage. Unsatisfied with the service received, the Boucard chief calls for institutionalizing the company’s relationship with the authorities or the formal signing of an official memorandum of understanding binding the entities, more cordial relations between the Cité Soleil city hall and private companies, a stable municipal administration, and an effective communication channel.

"We want the country to be beautiful and clean,” she concludes. “There are a lot of resources at the dump. Gases like methane could be captured. We are ready to work together with the authorities for something sustainable. We want to find a formula that works. We want to see something different and beautiful."

The reaction of the Cité Soleil town hall could not be obtained despite no less than four visits there in search of an interview, and promises of a call from municipal authorities. All of this did not succeed.

In the meantime, the Cité Soleil town hall continues to tax private companies operating in Truitier's national dump, but the companies get no services in return.

An Urgent Need for Investment

In the Port-au-Prince region with more than 3 million inhabitants, 20% of rubbish collections are provided by a dozen private operators, 10% by the informal sector, and about 30% by the SMCRS - the state authority responsible for collecting the waste that is deposited at Truitier, where it is piled up and compacted without any treatment.

Private companies offer their service to the wealthiest households, businesses, and national and international NGOs which are subscribers.

No less than a dozen private companies use Truitier. The site receives an average of 395 tons of garbage per day from public institutions such as the SMCRS, the town halls of Delmas, Pétion-Ville, and Carrefour, all transported by more than 20 trucks. But it also gets 400 tons of garbage daily from private sector operators.

"The Cité Soleil city hall receives the money,” said Fortuné Métylien, an inspector at the national dump. “We do not know what it does with it. What is definite and certain, it does not invest in the dump."

Having become an expert in waste management after working for more than 16 years at the SMCRS, Seignon is outraged by this situation which does not benefit the division (waste disposal) in which she has worked for five years.

You don’t need glasses to see the problem. It is obvious that the money collected is not reinvested on the landfill. The sum reported, even if it could not do much, could still help to improve the atrocious situation at the Truitier dump.

* ENQUET'ACTION is an online media of journalistic investigation, of multimedia journalism, and of deep-digging journalism, created in February 2017 in Port-au-Prince and officially launched in June 2017. Focused on quality journalism that believes in free access to information, it aims to become an indispensable source of information for national and international media, as well as for the public. It was born from the desire to reconnect with the fundamentals of journalism that seeks the quest for truth to allow the press to truly play its role of counter-power. This work is carried out with the support of the Action for Climate, Environment and Sustainable Development (ACLEDD) thanks to the financial contribution of the Knowledge and Freedom Foundation (FOKAL).