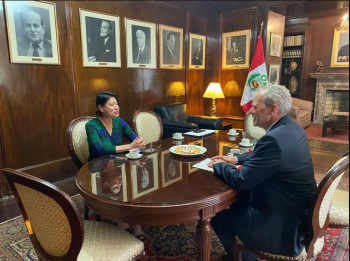 The Trudeau government is helping Washington consolidate a coup that has sparked a furious popular backlash in Peru. Ottawa is defending an unelected regime that has suspended civil liberties and imposed a curfew while deploying troops to the streets. Security forces have killed 24 (mostly indigenous) protesters over the past week.

Gervasi also released a statement to the media, reported CBC, about meeting Marcotte, which “reiterated Peru’s gratitude for the commitment of his country to work with President Dina Boluarte.”

In “Canada takes sides as hemisphere splits over who rules Peru” the CBC’s Evan Dyer reports that the US, Brazil, Ecuador, Panama, Chile, Uruguay and Costa Rica have expressed support for Boluarte while Mexico, Argentina, Bolivia, Dominica, Grenada, Saint Lucia, Saint Vincent and the Grenadines, Saint Kitts and Nevis, Antigua, Barbuda, Cuba, Nicaragua, Honduras, Venezuela and Colombia have all expressed some form of opposition to Pedro Castillo’s ouster.

Canada immediately backed Castillo’s December 7 removal at a special meeting of the Organization of American States. As I detailed in “Ottawa backs removal of elected Peruvian president despite protests”, subsequent Canadian statements have increased support for Castillo’s ouster. By visiting the foreign minister Marcotte has made Canada’s position clear and echoed US actions. On Friday US Secretary of State Anthony Blinken called Boluarte and US Ambassador Lisa Kenna met her on Tuesday. On Friday Mexican president Andres Manuel Lopez Obrador criticized Kenna for meeting Boluarte.

For over four years the Trudeau government has engaged in a brazen effort to overthrow Venezuela’s government. But their bid to make marginal right-wing opposition politician Juan Guaidó president has failed.

Large numbers of Peruvians have taken to the streets calling for Castillo’s release from prison and for new elections to be held. Many have also rallied in favor of dissolving an extremely unpopular congress and organizing a constituent assembly to rewrite a constitution adopted after Alberto Fujimori’s “self-coup”. Already on Friday two ministers in Boluarte’s government resigned to protest the repression.

Hopefully the protesters succeed in spurring changes to redress the country’s extreme inequities and deliver another blow to the Trudeau Liberal’s bid to subvert social democratic governments in the region.