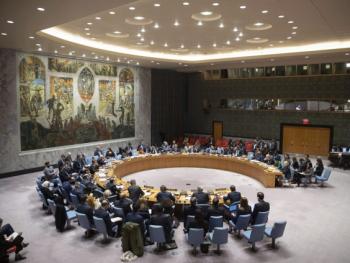 The Security Council meets on the situation in Syria, Thursday, Oct. 24, 2019 at United Nations headquarters. MARY ALTAFFER / THE ASSOCIATED PRESS

On Wednesday, Canada failed to gain a seat on the United Nations Security Council for the second time in a row. As someone born and partly raised in Uganda, who has worked at the African Parliament, I’d like to suggest some reasons why the largely Black and brown member states may have rejected Canada’s candidacy.

While Canadians don’t generally think of their country as militaristic, that is mainly due to our point of reference. Outside of a comparison to the U.S., we start to appear hawkish. Canadian forces are part of NATO missions in Iraq, Latvia and a host of naval deployments. In 2011, a Canadian general led the bombing of Libya, which the African Union vigorously opposed. AU officials argued the NATO war would destabilize that country and the region. An upsurge in anti-Blackness, including slave markets, subsequently appeared in Libya and violence quickly spilled southward to Mali and across much of the Sahel.

Whether or not they liked Muammar Gaddafi, African leaders generally support the principle of non-intervention in other countries’ affairs and respect for the UN charter. So do the small Caribbean states. Yet over the past two years, Canadian officials have directly and indirectly pressured CARICOM countries to join its campaign to oust Venezuela’s UN-recognized government. Most recently, Prime Minister Justin Trudeau brought up Venezuela with CARICOM Chair Allen Chastanet. Canadian officials also recently facilitated a video link meeting between CARICOM members and self-declared Venezuelan president Juan Guaidó.

If one seeks to understand the Security Council defeat, it is important to consider why a country like Grenada, for instance, would be committed to a non-interventionist outlook. A small island with 100,000 people, Grenada’s ability to constrain the regional hegemonic power is largely dependent upon respect for the UN charter.

The Canadian government’s anti-Palestinian voting record at the General Assembly also contributed to its defeat. Since coming to power, the federal Liberal government has voted against more than 50 UN resolutions upholding Palestinian rights backed by the overwhelming majority of member states. Ireland and Norway haven’t voted against a single one.

Canada’s rivals for the seats have per capita greenhouse gas emissions that are a little more than half of Canada’s. Canada’s GHG emissions rose 15 million tonnes between 2017 and 2018. Then the government purchased a climate destabilizing oil sands pipeline. As a result, there’s basically no chance Canada will reach its (insufficient) GHG reduction commitments under the 2015 Paris climate accord.

When Canada’s “environmentalist” prime minister openly says that an already wealthy country, with one of the world’s highest per capita carbon footprints, can’t leave its “173 billion barrels of oil in the ground,” what do environmentally conscious Ugandans hear? There is little they can do but bear the brunt of climate disturbances they’ve done very little to create.

Canada’s second defeat in a row for a seat on the Security Council represents a fork in the road for Canadian foreign policy. It will likely embolden anti-UN voices who believe Canada should deepen its ties with Washington, the Five Eyes and NATO.

I’d propose a different tack: a sense of internationalism based on the Golden Rule. Treat others as you want to be treated. This may sound simple or naïve, but the sentiment is crucial to a fair, rules-based international order and is at the heart of the UN Charter.

Each and every time we consider Canadian support for corporations or military interventions, we must take into account the standpoint of the largely Black and brown countries that make up most of the world.