Why bring baseball to Haiti? 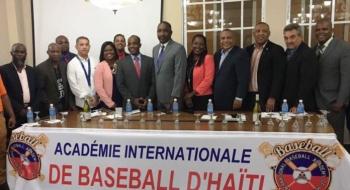 Leaders of the International Baseball Academy of Haiti (IBAH). Why are they trying to introduce baseball into Haiti, a game which Haitians have rejected since U.S. Marines tried to import it a century ago?

Our ancestors fought the first U.S. occupation of Haiti and resisted the introduction of baseball. Now people who don’t defend Haiti’s values, but instead want to make money, have decided to implant baseball on the ground still soaked with the blood of Charlemagne Péralte, the martyred leader of Haitian resistance to that U.S. occupation.

Haiti’s first occupation by the United States of America lasted 19 years (1915-1934). Three years ago, Haitian progressives commemorated the centennial of this shameful occupation of our country, which the Americans were never able to shape to their liking.

Haiti is the only country occupied by the Yankees to have resolutely resisted the game of baseball, the iconic American sport. Haitians who are self-respecting, Haitians who are worthy of the name, should applaud the fact that the Yankee occupiers could not instill in us, let alone impose on us, their sporting mores. In fact, the Haitian people should be proud of being different. Nicaragua, Panama, Cuba, the Dominican Republic, Puerto Rico, Mexico and Venezuela, all suffered the fate of being occupied by the Yankees and embraced the game introduced by the U.S. Marines. Haiti was the exception!

Youth from disadvantaged neighborhoods in border areas to develop baseball

Why, since 2017, have a group of Haitian and Dominican businessmen been setting up a project to prepare dozens of children and young people from disadvantaged neighborhoods to develop baseball in border areas between our two nations?

What is the motivation behind this bizarre initiative aimed at implanting baseball in Haiti, the country which so resisted it? Why not focus on soccer, Haiti’s national sport, which has lacked investment and official support for a long time, even losing ground over the past four decades, without any improvements on the horizon, while other countries are making progress?

It was with surprise and even emotional distress that I heard very recently, on Radio Zénith, former Fanmi Lavalas Senator Jean-Baptiste Bien-Aimé announce with a strange impertinence that “one of my priorities at the moment is to help develop baseball in Ouanaminthe [a major border town] so that our young people can sign big contracts.” I was dumbfounded, shocked. I couldn’t believe my ears. Did the Senator fall from another planet?

Our ancestors fought the American occupation and resisted baseball’s introduction. Now these businessmen want to implant baseball on soil still soaked with the blood of, not only Charlemagne Péralte, but Benoit Batraville, another martyred resistance leader, and all the valiant peasant cacos who fought the U.S. Marines, without forgetting the Haitian soldier Pierre Sully, who refused to surrender to the Yankees and was their first victim. Aren’t they traitors just like Jean Baptiste Conzé, who shamefully and treacherously conspired with U.S. Marine Sergeant Herman H. Hanneken to assassinate Charlemagne Péralte, our national hero? Conzé, that vain caco lieutenant, was bought for $2,000 in cash and the promise of the rank of officer to kill the leader of the cacos and the anti-American rebellion of that time. Aren’t these Haitian businessmen new Conzés, killing Péralte a second time?

Isn’t such a “priority” on the part of Senator Bien-Aimé and his pro-baseball, pro-Dominican, pro-American co-religionists trampling the country’s history? What are the interests that led these people to take such an initiative to the detriment of our own history as a colonized, dominated, and occupied people to this day?

Why can’t we be ourselves without copying others? Our national sport being soccer, why do these crooked businessmen and politicians not invest in our national sport in order to greatly improve it, so that we not only have quality players but also a competitive national team?

What traitorous hand is behind this initiative? Is it a way to trample the memory of our ancestors, the cacos, who refused to submit to learning this game promoted by the Yankees?

In other words, is this another way of exploiting our youth in the same way that the subcontractors exploited workers who toiled in the baseball factories? Yes, we must remember: there was a time in the 1970s and 1980s when 10 baseball factories dotted  Port-au-Prince; at the time, Haiti was the biggest exporters of baseballs. See the irony: a nation that doesn’t play baseball but which exported every year more than 20 million baseballs. My lord!

In a 2004 article in the New York Times, a Costa Rican baseball factory worker (the transient baseball assembly plants are now there) summed up the exploitation: “‘After I make the first two or three balls each week, they have already paid my salary. Imagine that.”

Dominicans and Haitians unite to promote baseball in Haiti!

For a long time, the Dominican and Haitian bourgeoisies have collaborated to carefully maximize their mutual financial interests. It is therefore not surprising that some Dominicans and Haitians are coming together to promote baseball in Haiti. You can bet that behind this beautiful marriage lies a business of big bucks, millions of dollars.

“We must admit that, during this clinic, our coaches really benefitted,” said Gardy Cyliaque Prophet, the AHB’s President. “To follow up this operation, we will soon have an Olympic solidarity course that will last six months.”

A second meeting is scheduled for August 2018. The program will be launched next July in Juana Méndez de Dajabon (Dominican Republic) and Ouanaminthe (Haiti). According to the organizers, the main sports authorities of both countries have been invited.

The Jack Brewer Foundation has expressed interest in promoting baseball’s development in Haiti and is supporting the first baseball league, whose first field was built in Croix-des-Bouquets. This Foundation also stated that “Haiti could achieve much more in baseball than the Dominicans were able to get out of it.”

“We have no problem in terms of sports equipment,” said Prophet. “In other words, we have a surplus of equipment. As far as infrastructure is concerned, we have three fields available: one located at the Sports Center for Hope, another at the former airport [Bowen Field, off the capital’s Delmas Road], and the last at the Croix-des-Bouquets Ranch [a state sports complex]. In the border zone, the Haitian state has given us – we have papers in hand – 12 fields for baseball practice.”

“We are very pleased with the support we are receiving from the sports authorities in the Dominican Republic, especially the baseball authorities, to promote this discipline in Haiti,” said Dr. Coffy of IBAH.

There is nothing sporting about the game of baseball in Haiti. It only soils our great historical distinction as the only country, occupied by the United States, that has not adopted the number one sport of the occupying forces.

(An earlier version of this article was published in French in the June 27, 2018 edition of Haïti-Liberté.)