Why Canada should leave NATO 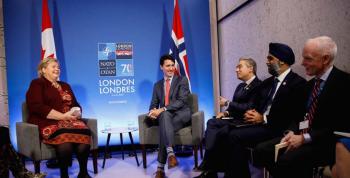 The North Atlantic Treaty Organization (NATO) is a bad influence. NATO strengthens the worst tendencies of our political culture.

Ricochet recently reported on internal government documents regarding a discussion about selling sensors for armed drones to Turkey. Last spring the Trudeau government approved an exemption to an arms export ban to Turkey, allowing Ontario-based L3Harris Wescam to sell its thermal surveillance and laser missile-targeting technology. This technology was subsequently employed in the deadly conflict between Azerbaijan and Armenia over Nagorno-Karabakh.

In providing the exemption, government officials demonstrated concern about corporate interests and Canadian relations with a NATO ally. "The need for cooperation among NATO partners was a major element of the justification for the carve-out that allowed Canadian tech to be transferred despite the stated ban," reported Jon Horler.

This is not the first time NATO has been invoked to justify arms sales that fuelled a war. In 1967 prime minister Lester Pearson responded to calls by opponents of the war in Vietnam to end the Defence Production Sharing Agreement, the arrangement under which Canada sold the U.S. weapons, with the claim that to do so would imperil NATO. Pearson claimed this "would be interpreted as a notice of withdrawal on our part from continental defence and even from the collective defence arrangements of the Atlantic alliance."

NATO has also had a deleterious impact on nuclear weapons policy. In 2017 the government "hid behind Canada's NATO membership," according to NDP foreign critic Hélène Laverdière, when it voted against holding and then boycotted the 2017 UN Conference to Negotiate a Legally Binding Instrument to Prohibit Nuclear Weapons, Leading Towards their Total Elimination.

In the lead-up to the resulting Treaty on the Prohibition of Nuclear Weapons entering into force, the nuclear-armed alliance publicly criticized the treaty. "As the Treaty on the Prohibition of Nuclear Weapons, or ban treaty, nears entry into force, we collectively reiterate our opposition to this treaty," noted a NATO statement. Despite 86 countries signing the treaty, Ottawa continues to refuse to adopt the UN nuclear nan.

The alliance also heightens pressure on the federal government to boost socially and ecologically damaging military spending. In 2006 NATO countries adopted a pledge to put two per cent of economic output into their military. Militarists regularly cite this arbitrary figure when pushing for greater military spending.

Former U.S. president Donald Trump and other U.S. officials have repeatedly demanded Canada and other NATO countries spend two per cent of GDP on the military. A recent Bloomberg headline noted: "NATO Members Ramp Up Defence Spending After Pressure From Trump."

NATO has also been used to push weapons procurement. Calling for expansion of the fighter jet fleet, senior military officials told The Globe and Mail in 2017 that "Canada's fighter fleet is not big enough to meet its NORAD and NATO obligations at the same time."

The federal government's website justifies purchasing 15 Canadian Surface Combatants (CSC) ships -- at a cost of $77 billion to acquire and $286 billion over their life-cycle -- on the grounds that they "will be able to a perform a broad range of missions with" NATO and other alliances. On Lockheed Martin's site it says the "CSC will be fully interoperable with five-eyes and NATO nations" and that its ship-building "is based on 30-plus years' experience and knowledge of Canadian and NATO naval operations."

In a history of the first century of the navy, Marc Milner describes a series of reports in the mid-1960s, concluding that the Royal Canadian Navy was "too small to meet Canada's NATO obligations" and should be expanded "to meet NATO and North American commitments."

Canada provides logistical support to NATO's Kosovo Force and Canadian soldiers are part of NATO Mission Iraq, which Canada led until recently. About 600 Canadians are part of a Canadian-led NATO mission on Russia's doorstep in Latvia.

Over the past two decades the alliance has drawn Canada into a number of violent conflicts. A Canadian general led NATO's 2011 attack on Libya in which seven CF-18 fighter jets and two Canadian naval vessels participated. Hundreds of civilians were killed by NATO bombers and to this day the country remains divided.

During the 2000s, 40,000 Canadian troops fought in a NATO war that left thousands dead in Afghanistan. While the stated rationale of the war was to neutralize al-Qaeda members and topple the Taliban regime, the Taliban remains a major actor in the country and jihadist groups' influence has increased.

In 1999 Canadian fighter jets dropped 530 bombs in NATO's illegal 78-day bombing of Serbia. Over 500 civilians were killed and hundreds of thousands displaced in bombing that destroyed critical infrastructure.

Sometimes it is necessary to stop hanging around with people who lead you astray. Get rid of the bad influences in your life. It's time Canada left the belligerent, militaristic North Atlantic Treaty Organization.

On the eve of NATO's 72th anniversary the Canadian Foreign Policy Institute will be hosting a discussion on "Why Canada should leave NATO."

Yves Engler is a Montreal-based writer and political activist.