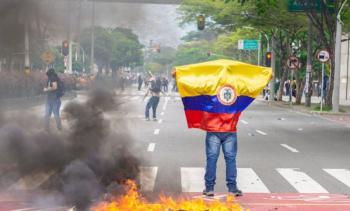 On May 28, right wing Colombian President Iván Duque deployed the military to Cali. The city of 2.3 million has been the epicentre of a month-long nationwide protest that forced the government to withdraw a regressive tax proposal that unleashed a general strike.

During the past month security forces have killed at least 50 and probably dozens more. Over 300 are missing, according to Colombia’s National Movement of Victims of State Crimes, in a country with a long history of political disappearances.

In a sign the politics of the protesters are radicalizing, on the night of May 27, protesters burned massive American and Israeli flags. In response, journalist and filmmaker Dan Cohen tweeted, “This isn’t just a strike against austerity measures. It’s a full-on uprising against imperialism.”

Looked at another way, however, the latest uprising in Colombia is also a reaction to Canadian policies in the region.

Indeed, over the past three decades, Ottawa has retained close diplomatic ties to Latin America’s most repressive state and has promoted capitalist policies that have contributed to extreme levels of inequality within Colombia.

For its part, the Trudeau government has promoted President Duque who Le Soleil labeled “le champion du retour de la droite dure en Colombie” (champion of the return of the hard right in Colombia). After Duque won a close election marred by fraud allegations, then Foreign Minister Chrystia Freeland congratulated him and said, “Canada and Colombia share a commitment to democracy and human rights.”

In August 2018, Trudeau tweeted, “Today, Colombia’s new President, Iván Duque, took office and joins … others with a gender-equal cabinet. Iván, I look forward to working with you and your entire team.” A month later he added, “Thanks to President Iván Duque for a great first meeting at UNGA this afternoon, focused on growing our economies, addressing the crisis in Venezuela, and strengthening the friendship between Canada & Colombia.”

As Trudeau got chummy with Duque, the Colombian president undercut the peace accord the previous government signed with the Revolutionary Armed Forces of Colombia (FARC) to end the country’s 50-year civil war, which left over 200,000 dead. Duque’s policies increased violence towards the ex-rebels and social activists. More than 253 former FARC members have been killed in the past three years, while many more more human rights defenders have been murdered.

Trudeau has yet to say anything about the massive repression of protesters in the past month. After numerous Canadian rallies were held in solidarity with protesters in Colombia, Foreign Affairs Minister Marc Garneau released a statement ten days into the strike. But Garneau criticized the security forces’ deadly violence in equal measure to vandalism carried out by the protestors. His remarks also praised the Duque government, which had made numerous menacing statements towards the demonstrators.

This is nothing new, however: Canadian support for repressive Colombian governments is longstanding.

Stephen Harper maintained even closer diplomatic ties with Duque’s patron Alvaro Uribe. In 2009 the former prime minister referred to the far-right president as a valuable “ally” in a hemisphere full of “serious enemies and opponents.” A 2007 visit to Colombia by the Canadian PM was described by the Economist as giving Uribe “a vote of confidence at a time when he [was] being assailed both in Washington and at home.” At the time, Uribe’s government was plagued by a scandal tying numerous top officials to Colombia’s brutal paramilitaries. Dozens of Uribe-aligned congresspeople were implicated and the president’s cousin was among those who had been jailed.

Uribe’s terrible human rights record did not stop Harper from signing a free-trade agreement with Colombia. Harper devoted a great deal of energy to backing the most repressive and right-wing government in Latin America. According to an April 2009 cable from the US embassy in Ottawa, in private the PM conceded that the Colombia trade accord was unpopular with Canadians. Released by Wikileaks the cable noted: “It was a painful but deliberate choice for the Prime Minister” to support president Uribe in the face of stiff resistance to the free trade agreement, particularly from Canada’s labour movement. The Canada-Colombia trade agreement was also opposed by most of that country’s organized peasantry and labour.

The trade deal was part of a longstanding push to liberalize Colombia’s economy. In the late 1990s, Canada’s aid agency supported petroleum legislation reform, which benefited Canadian firms. More significantly, Ottawa began an $11 million project to re-write Colombia’s mining code in 1997. The Canadian International Development Agency (CIDA) worked on the project with a Colombian law firm, Martinez Córdoba and Associates, that represents multinational companies, and the Canadian Energy Research Institute (CERI), an industry think tank based at the University of Calgary.

These organizations spent more than two years canvassing mining companies to find out what the industry wanted from new mining regulations. A representative from Greystar Corp., which was involved in the effort, explained how they provided “input that reflected the mining industry’s point of view as to what was important in such legislation to encourage mining.”

Once completed the CERI/CIDA proposal was submitted to Colombia’s Department of Mines and Energy and became law in August 2001. “The new code flexibilised environmental regulations, diminished labour guarantees for workers and opened the property of afro-Colombian and indigenous people to exploitation,” explained Francisco Ramirez, president of SINTRAMINERCOL, Colombia’s State Mine Workers Union. “The CIDA-backed code also contains some articles that are simply unheard of in other countries,” added Ramirez. “If a mining company has to cut down trees before digging, they can now export that timber for 30 years with a total exemption on taxation.”

The new code also reduced the royalty rate companies pay the government to 0.4 percent from 10 percent for mineral exports above three million tonnes per year and from five percent for exports below three million tonnes. In addition, the new code increased the length of mining concessions from 25 years to 30 years, with the possibility that concessions can be tripled to 90 years.

Canadian officials were happy with the results. According to CIDA’s summary of the project, “Canadian energy and mining sector companies with an interest in Colombia will benefit from the development of a stable, consistent and familiar operating environment in this resource-rich developing economy.”

Ottawa has continued to plow ‘aid’ dollars into supporting the mining sector in Colombia. The Skills for Employment in the Extractives Sector of the Pacific Alliance, the Andean Regional Initiative and the Corporate Social Responsibility Strategy for the Canadian International Extractive Sector have channeled millions of dollars into assisting mining interests there.

Canadian assistance was also used to reform the country’s non-resource sector. In 1995 CIDA provided $4 million to “contribute to the liberalization process of the telecommunications sector in Colombia.” Ottawa-based Destrier Management Consultants used the money for training seminars, workshops and advisors. Within a few years Canadian companies operated Colombia’s leading cellular phone provider and installed a large proportion of the country’s phone lines. In 2003 Canada’s Nortel Networks, explained Asad Ismi, “helped bring about the liquidation of TELECOM, Colombia’s biggest telecommunications company, and the likely privatization of its successor… With the privatization, however, 10,000 unionized telecommunications workers lost their jobs that year, and over 70 trade unionists were murdered by paramilitaries for demonstrating against the privatization.”

Canadian investment in Colombia, especially in the resource sector, was intimately tied to human rights abuses. A study on “The Presence of Canadian Petroleum Companies in Colombia,” found that “an avalanche of new contracts and new Canadian companies” entered Colombia in 2000 “at a moment when the internal conflict has intensified particularly in traditional, indigenous-occupied areas, and where resistance to their projects is significant.”

In the late 1990s Calgary-based Enbridge operated the OCENSA pipeline jointly with Toronto-based TransCanada Pipelines. Both companies owned a 17.5 percent share of the pipeline along with shares held by British Petroleum, Total and the Strategic Transaction Company. Until 1997 the OCENSA consortium contracted Defence Systems Colombia (a British firm) for security purposes. According to Amnesty International:

What is disturbing is that OCENSA/DSC’s security strategy reportedly relies heavily on paid informants whose purpose is to covertly gather intelligence information’ on the activities of the local population in the communities through which the pipeline passes and to identify possible ‘subversives’ within those communities. What is even more disturbing is that this intelligence information is then reportedly passed by OCENSA to the Colombian military who, together with their paramilitary allies, have frequently targeted those considered subversive for extrajudicial execution and disappearance… The passing of intelligence information to the Colombian military may have contributed to subsequent human rights violations. Amnesty added that OCENSA and DSC purchased military equipment for the notoriously violent 14th Brigade of the Colombian army.

While Canadian investors contributed to Colombia’s dirty war, so did Canadian arms manufacturers. In the late 1990s Canada’s Department of National Defence sold 33 Huey helicopters to the US State Department, which added machine guns and sent them to the Colombian police and military as part of “Plan Colombia.” The Huey sale followed Bell Helicopter Textron Canada’s export of 12 helicopters directly to the Colombian air force and police. The helicopter was a type “widely used by the US military in the 1970s in counter-insurgency operations in Vietnam.” Not only did Ottawa allow helicopter sales to Colombia’s military, the Canadian embassy in Bogota promoted them.

In 2013 the Harper government added Colombia to Canada’s Automatic Firearms Country Control List to facilitate the export of assault weapons. Since then, weapons sales to Colombia have usually totaled only a few hundred thousand dollars a year but in 2014 that number reached $45 million. The Crown-owned Canadian Commercial Corporation helped sell 24 light armoured vehicles to the Colombian army and four armoured personnel carriers to its police.

Since 2011 Colombian military personnel have participated in Canada’s Military Training and Cooperation Program. Colombia’s police have also been instructed, reports Abram Lutes, “through exchanges with the RCMP and the ongoing Anti-Crime Capacity Building Program (ACCBP), which nominally trains the Colombian national police in combating drug trafficking. The ACCBP is Canada’s contribution to Colombia’s long drug war, which provides pretext for security forces and paramilitaries to target leftist guerillas and peasants who produce cocoa.”

As part of its “role in the fight against drug traffickers,” Canada supplied intelligence-gathering equipment to Colombia in the early 1990s. In 1990 Canada began a $2 million program to provide intelligence equipment and bomb detectors to the Colombian Departamento Adminitrativo De Securidad. At that time Colombia’s leading news magazine, Semana, suggested that Canada was working with the US in a hegemonic project in the region.

According to former JTF2 soldier Claude Morisset, Canada also sent soldiers to Colombia in the late 1990s. In his memoir, We Were Invincible, Morisset describes his mission to the Colombian jungle to rescue NGO and church workers “because FARC guerillas threatened the peace in the region.” The Canadian soldiers were unaware that they were transporting the son of a Colombian leader, which prompted the FARC to give chase for a couple of days. On two different occasions the Canadian forces came under fire from FARC guerrillas. Ultimately the Canadians were saved by US helicopters, as the JTF2 mission was part of a US initiative.

While Colombian protesters didn’t burn the Canadian flag, maybe they should have. Canada has long promoted corporate and imperial interests in Colombia and continues to do so today.