Why does the United States continue to occupy a Haitian island? 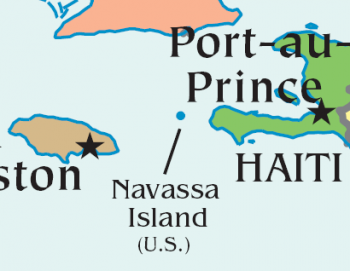 The Americans mined a million tons of guano on the island without paying a cent to the Haitian authorities. Other countries have sold the product for hundreds of millions of dollars

In 1857, two Americans, Peter Duncan and Edward Cooper, landed on the coast of La Navase, an island of 5 km square, located 40 km from the town of Jérémie. It is an island that belongs to Haiti, according to the Haitian Constitution of 1801.

The Americans have declared it the property of the United States of America, under the Guano Island Act, passed a year earlier by the U.S. Congress. This law declared that any uninhabited island containing guano, a highly effective fertilizer obtained from the excrement or waste of seabirds, was instantly under the protection of the U.S. government.

The United States, with its booming agricultural industry in the 19th century, needed guano to bolster the fertilizer used in its fields. There was a shortage of guano in the United States. In addition, guano was used in the manufacture of gunpowder.

The United States mined more than one million tons of guano at La Navase, according to their own estimates. In the 1900s, Peru exported 20 million tons of guano and made a profit of $2 billion. Adjusted for inflation, this amount would be much higher today. Yet the United States has never paid a penny to the Haitian authorities since they took control of the island by force.

In his 1850 presidential address, the 13th President of the United States, Millard Fillmore, stated, “Guano has become such an important element of the agricultural sector of the United States that it is the duty of the government to employ all means properly in its power to secure its importation into the country at a reasonable price. Nothing will be omitted on my part to accomplish this duty.”

The exploitation of La Navase began immediately at the end of the 19th century. Today, the island is still under American control.

According to lawyer Samuel Madistin, a former Haitian member of parliament, this appropriation should be subject to economic compensation from the United States to Haiti.

In 1998, the Senate of the Republic wanted to send a delegation to the island, of which he himself would have been part. Without success. “Senators brought up the issue at the time, but the executive had unfortunately not followed suit”, regrets Madistin.

The lawyer considers the island to be occupied by force by the Americans. “This occupation is not a legal situation, he said. It is equivalent to colonization where stronger countries exploit weaker countries to ensure their economic development at the expense of others.”

In addition to the debate on the restitution of the debt of independence of France to Haiti, the economist Thomas Lalime believes that the exploitation of the resources of this island could serve the development of Haiti.

“We should see the inventory of available resources to assess the impact of their exploitation. But more importantly, we must look at the strategy of its location to know what it can be used for,” he explains.

Samuel Madistin goes further and believes that the benefits of guano exploitation should, at a political-diplomatic level, be returned.

There are several reasons why Americans remain attached to this island, classified as a natural reserve by UNESCO.

According to the United Nations Convention on the Law of the Sea of 1986, a state can claim exclusive rights to the resources in the waters, but also in the seabed of territory considered an island. It can do so if the territory is neither inhabited nor claimed by a State, and up to 370 km from the coast.

The United States has the largest exclusive economic zone in the world and is directly followed by France, which has territories on every continent.

In addition to its biodiversity, La Navase occupies a strategic position in the maritime transport of American goods through the Panama Canal. Until 1996, the United States placed a lighthouse there to direct its ships.

Moreover, located between Haiti, Jamaica, and Cuba, it offers them a strategic position at all times against their old enemy Cuba.

The island, which has a rich biodiversity, provides exclusivity on certain species to the United States, which can eventually exploit them. A federal entity lists 339 animal and plant species in the area.

According to Joël Junior Beausséjour, a history professor who is currently working on a master’s degree in international law, we must go back in history to understand how this country was able to monopolize La Navase. If the constitution of 1801 recognizes it as property of Haiti, at the time they seized it, the constitution in effect was new and did not mention La Navase.

“It was the constitution of 1846, amended in 1849 by Soulouque, who established his empire. This constitution omits La Navase unlike those that preceded it.”

The historian also proposes an alternative explanation for the economic stakes behind the appropriation of the island.

“In 1823, the American president James Monroe wanted to assert the power of the United States in America and in the world. He developed the theory of America for Americans, to eliminate the influence of European powers on the continent. In order to effectively carry out this approach, he passed the Guano Island Act, which was to be used to expand his country’s influence in the world.”

In opposition to the majority opinion on the subject, Beausséjour considers that under international law, the Americans are legally occupying La Navase.

“The omission in the imperial constitution and the fact that the island has always been uninhabited explains it,” he says.

This minority position seems to ignore the fact that Peter Duncan and Edward Cooper unsuccessfully approached Haitian authorities at the time to obtain permission to exploit the island.

It is before the International Court of Justice (ICJ) that conflicts between states are settled, according to the requirements of international law. However, even a ruling by the ICJ would have no force, as the court does not have the means to sanction the state it deems at fault.

The United States took control of 94 islands under the Guano Island Act. Until 1903, 66 of these were then recognized as United States territories. After World War II, those whose guano deposits had been fully exploited were returned to the states that claimed them. But the strategic position of La Navase excluded it from this list.

165 years later, The United States Fish and Wildlife, an entity affiliated with the U.S. Department of the Interior, occupies this island adjacent to Haiti. A permit is required to set foot on the island.

For the moment, La Navase is not a subject of debate in the government, informed a spokesman for Prime Minister Ariel Henry, when asked about the issue. This is not new, explains Junior Joël Beausséjour.

“Few Haitian political figures have put the issue of the island on the table. For this, a good example is that of Soulouque. The day after the Americans landed on La Navase, he retaliated and sent a warship to drive out the invaders. He had also taken legal steps surrounding the island, but he didn’t stay in power long enough to finalize them.”