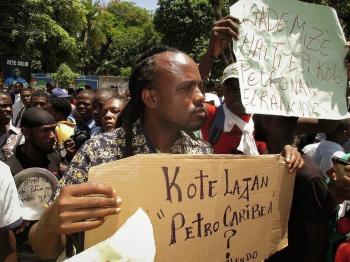 Visitors driving under an unfinished bridge on a busy road here in Haiti’s capital might just think it's part of a construction project. But to millions of angry Haitians, the concrete slab has become a glaring symbol of the corruption that holds the impoverished Caribbean nation hostage and has sparked deadly street protests.

Funds to build the bridge came from a loan that Venezuela gave to Haiti for reconstruction projects following the devastating 2010 earthquake. Since then, politicians have racked up nearly $2 billion in debt to the so-called PetroCaribe scheme. Most of the projects the money was intended for — including housing and government buildings — remain either incomplete or nonexistent.

Since the release of the report, Haitians have been demanding the answer to one simple question, first posed by activist/filmmaker Gilbert Mirambeau Jr. He tweeted a picture of himself blindfolded and holding a board that read in Creole: Where is the PetroCaribe money?

His tweet went viral, and soon after, public anger spilled onto the streets, with tens of thousands protesting over eight consecutive days, at points becoming violent. Since the protests started last year, 7 people have died.

The president has only given one statement on the crisis since it began, refusing to meet the demands of the protesters who want him to step down. Meanwhile, the prime minister, though refusing to take questions, promised to cut some perks of government officials.

VICE News tracked the prime minister, Jean-Henry Céant, to his office. "We are talking about funds that have been stolen, but the theft has to be proven,” he said. He denied the president was using him as a shield but added, “I know one thing. The president has to work with me to find the PetroCaribe money.”

After a lull in street demonstrations over the past five days, the opposition parties are once again calling for people to resume their pressure on the government. In the meantime, life goes on next to the unfinished bridge. People wash in a pool of brown, dirty water, some have only one meal a day. And with half the population living on $2 a day, everyone keeps asking: Where is my money?