Will Venezuela exclude Haiti from the PetroCaribe relaunch? 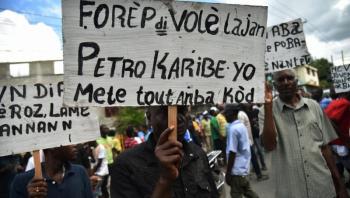 A demonstration by the PetroCaribe Challengers. Photo by Medyalokal, Wikimedia Commons, via CC BY-SA 4.0.

According to multiple reports, Venezuela will relaunch its PetroCaribe energy cooperation agreement with Caribbean nations sometime in 2020, prompting Haitians to wonder if Haiti stands a chance to get included this time around.

PetroCaribe, a generous deal with long-term payment plans meant to benefit the Haitian people, was suspended in 2018 following Venezuela's presidential crisis. When Venezuela's President Nicolás Maduro announced the PetroCaribe relaunch, he warned that the deal would not be “extended to countries that are ‘at war’ with Venezuela,” which could include Haiti, according to Haiti Liberte media.

That's because, at a January 2019 vote at the Organization of American States (OAS), the Haitian government, under President Jovenel Moïse, sided with the United States in rejecting the legitimacy of Maduro as president. Instead, Haiti endorsed Juan Guaidó, an opposition politician who continues to contest Maduro's presidency.

“Haiti doesn’t recognize us, so we haven’t excluded Haiti,” a high-ranking Venezuelan government told Haïti Liberté. “Haiti has excluded itself,” he said.

Interestingly, former senator Jean-Charles Moïse, who chairs the opposition party Pitit Desalin, recently met with President Maduro to apologize for Haiti's vote at the OAS, hoping to smooth things over so that Haiti may actually benefit from the PetroCaribe deal.

But Haitians wonder if the apology will be enough.

PetroCaribe has been a hugely contentious issue in Haiti, thanks to a corruption scandal that sparked violent street protests nearly a year ago on February 7, 2019, and continued for months.

The Haitian government allegedly squandered PetroCaribe funds meant to develop its economy and aid social programs. More than $3 billion United States dollars were embezzled by government officials through opaque contracts — including one with a company called Agritrans, owned by President Moïse.

As a result, few Haitians saw any benefits promised from the PetroCaribe deal and demonstrations calling for Moïse's resignation have plagued the president's term of office.

Meanwhile, Haitian taxpayers are stuck with at least a $2 billion USD debt to Venezuela, which was siphoned off the PetroCaribe endowment.

According to Haiti Liberte:

Jovenel Moïse’s betrayal of Venezuela has been one of the motive forces behind the massive nationwide insurrection calling for his resignation since July 2018, when his government tried to raise fuel prices following PetroCaribe’s cut-off.

The first incarnation of PetroCaribe happened in 2005, under then-Venezuelan president Hugo Chavez. The regional energy program was intended to provide petroleum products to member states under preferential terms.

Haiti did not join right away — it was only after Chavez “actively courted” newly elected, then-president René Préval, that the country was included in the deal — which further complicated Venezuela's already strained relationship with the United States.

The United States and Haiti have had a complicated history that includes, among other things, occupation and US interventions, questionable humanitarian initiatives and the United States President Donald Trump's dismissal of it as a “shithole country.”

Yet, on January 30, 2020, Haiti joined the US-backed Lima Group, comprised of 12 Latin American countries, aimed at seeking an end to the Venezuela crisis, who have urged global pressure on Maduro to “re-establish democracy” since 2017, when the presidential crisis began.

Today, the questions remain — with Preident Moïse still holding onto power, will Venezuela ultimately include Haiti in the relaunch of PetroCaribe? If so, would it have to be under a new government in order to win the trust of both Maduro and Haitian citizens? Or will Haiti lose a second chance to benefit?