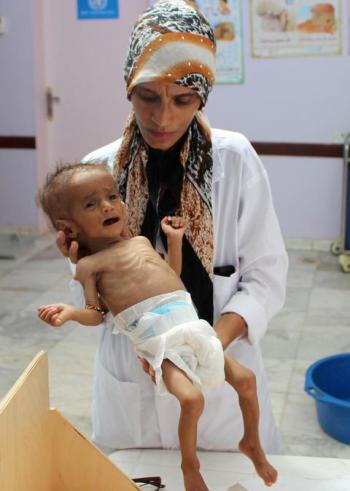 A nurse carries a Yemeni child suffering from severe malnutrition at a hospital in the northern district of Abs in Yemen's northwestern Hajjah province on Sunday. UN agencies say some 14 million people are at risk of famine in Yemen, described as the world's worst humanitarian crisis, with the World Food Programme saying it will nearly double food aid to the country to avert “mass starvation.”  (ESSA AHMED / AFP/GETTY IMAGES)

A potential ceasefire in the Yemen war comes as a glimmer of hope to the world’s worst man-made humanitarian disaster. And while any agreement to reduce hostilities is certainly promising, it is still unclear what access humanitarian organizations will gain to deliver life-saving aid to the families and children who need it most.

Relentless bombing airstrikes have been a major cause of civilian deaths during the three-and-a-half-year-old conflict in Yemen. The country is now on the brink of the world’s worst famine in 100 years, according to the UN.

For a brief moment, there was an increase in outrage and grief about the horrors confronting children in Yemen. Those who saw the New York Times article on Yemen’s impending famine will forever have the photo of emaciated 7-year-old Amal seared in their minds. Days before her entirely preventable death, Amal gave a face to the 1.8 million severely malnourished children in war-torn Yemen.

Our organizations are some of the few still working to provide life-saving aid in Yemen. Our teams on the ground know all too well about the patients in Yemen’s pediatric wards. Patients like Amal. They have seen child after child come in for life-saving therapeutic feeding, and the desperation on the faces of parents hoping that this time, they won’t have to watch another child slowly waste away.

We also know of countless families unable to make it into health centres, because they cannot afford the fuel to transport their sick and starving children. Or, because the roads have been reduced to rubble through airstrikes. Because also, the reality is, countless hospitals have been targeted and bombed. Or maybe, it’s the thought of having to leave their remaining children behind.

The terror parents feel for their children in Yemen is justified: children have been killed in their school buses, in food markets, and at weddings and funerals. The UN has reported that women and children have been hit by snipers and shelling, “while in their homes, just outside their homes, fetching water at local wells, on their way to purchase food, travelling to seek medical attention and delivering critical supplies.” Conditions are particularly worsening for women and girls, who are now more vulnerable to violence and exploitation due to the conflict. According to the UN, more than three million women and girls in Yemen are at risk of gender-based violence.

Despite the odds, humanitarian aid is making a difference. Children are being treated for malnutrition, and receiving emergency health care. Families are receiving access to clean water, helping to tackle the growing cholera crisis, with 12,000 cases reported each week in September. Cash distributions are mitigating the skyrocketing food and fuel prices.

While these interventions can and do save lives — and urgently require more funding — they alone will not end the conflict, the core source of terror, loss and heartbreak.

In recent weeks, Canada and other countries have faced increasing pressure to suspend military assistance to parties to the conflict in Yemen, who according to the UN, are responsible for potential war crimes.

Canada’s statements have been welcome: our Government has called for a ceasefire and for life-saving assistance to be allowed into the country. Canada has also deplored the ongoing violence and demanded it ends. In addition to its significant and critical humanitarian assistance, Canada has also supported a UN-led group of experts investigating violations of international law in Yemen.

These interventions are welcome and needed. But Canada must not stop at this. The time has long come for Canada to join countries like Germany, Belgium, Finland, Norway, and Sweden, and suspend its military assistance to parties to the conflict in Yemen.

Doing so would send a clear signal, to all parties to the conflict and any remaining allies who continue to implement lucrative yet deadly arms deals, that the horrors in Yemen must stop.

For Amal, any such action from Canada will be too late. We can no longer save her. But we can stand with the women and children in Yemen still fighting every day to survive.

As Canadians, let us channel our grief and heartbreak at Amal’s death to call on our government to suspend its military assistance to parties to the conflict, and move forward without complicity, pushing for accountability for those who have committed atrocities.

Join us. Because the women and children of #YemenCantWait.