The world's saints and sinners, according to Canada 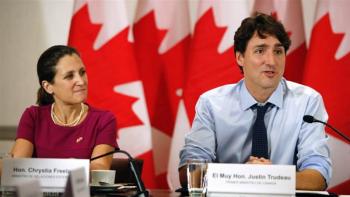 Turns out, the Pope isn't alone in the saint-anointing business.

Canadian Foreign Minister, Chrystia Freeland, and, by extension, Canada, are also, it appears, ordained not only to pick saints but sinners.

I was reminded of this grating impulse after Freeland unveiled recently - with a burst of self-congratulatory fanfare - sanctions against 52 foreigners Canada deems corrupt and who, apparently, are guilty of human rights abuses too.

Not surprisingly, Canada's swaggering list of sinners is dominated by easy marks: Russians, Venezuelans, and South Sudanese. Most of the names on Freeland's register of alleged trespassers are largely unknown save for one, Venezuela's President Nicolas Maduro.

Clearly, Freeland didn't feel compelled to offer a morsel of evidence to back her incendiary claim that Maduro, and scores of other top Venezuelan officials, are mendacious, human rights violators.

She didn't have to. Her allegations were regurgitated as gospel delivered from on high by a fawning Canadian corporate media that instantly abandoned even a hint of scepticism and unanimously demonised a South American head of state by declaring: Guilty on all counts.

Freeland's revisionism and signature condescension were greeted, almost universally, with broad applause and without so much as a lonely note of censure from Canada's so-called democratic socialists, the New Democratic Party that shares, at least theoretically, Maduro's politics.

Freeland went into chest-thumping action just weeks after the Canadian Parliament unanimously backed the anti-graft "Magnitsky Law", named after the Russian tax lawyer who was beaten to death in a Moscow prison after accusing government apparatchiks of theft.

Canada joined the United States, the UK and Estonia in passing legislation designed to punish the aforementioned sinners by freezing their assets and banning their overseas travel.

"Canada is determined to protect human rights and combat corruption worldwide. Today's announcement sends a clear message that Canada will take action against individuals who have profited from acts of significant corruption or who have been involved in gross violations of human rights," Freeland said after imposing sanctions on Maduro et al.

Curiously, Freeland's most wanted list of international miscreants did not include any senior or not-so-senior Israeli or US officials. In her cynical, myopic geopolitical calculus, Venezuela and Russia are sinners, while Israel and the US are saints.

This, despite the marquee-sized fact that Donald Trump's authoritarian regime was labelled earlier this month as "one of the most corrupt administrations in US history, one of first-class kleptocrats," by  Newsweek magazine.

Somehow, Freeland missed Newsweek's damning cover story that catalogued the systemic, rampant malfeasance that is now generally accepted - even among obsequious US mainstream media - to be synonymous with Trump's wretched rule.

Still, Freeland's glaring oversight is particularly puzzling since, in her former life as a journalist, she wrote a much heralded book about the insatiable avarice of plutocrats, aptly titled: "Plutocrats: The Rise of the New Global Super Rich."

Oh well, Freeland's stupefying stupour is, I suppose, a reflection of the institutional expectation that Canada's top diplomat will slavishly curry favour with the well-heeled Western powerbrokers that she once vigorously excoriated.

And Freeland remembers, no doubt, that more than a few of those American plutocrats, turned "statesmen," were intimately implicated in the torture and degradation of countless innocents in secret, state-sanctioned "dark sites," Abu Ghraib and Guantanamo Bay.

Yet, none of the architects of any of those crimes has ever been sanctioned by Canada, or that preening human rights champion, Chrystia Freeland.

Like her boss, Justin Trudeau, Freeland was mute while the Israeli military enthusiastically engaged in what amounted to a murderous turkey shoot in Gaza in 2014 at the explicit behest of its political masters who issued their grotesque orders comfortably from Tel Aviv.

Through it all, Trudeau and Freeland (then, in opposition) sided rhetorically with former Prime Minister Stephen Harper who, in words and deeds, encouraged Benjamin Netanyahu to please proceed.

Three years later, and now wielding authority over Canada's foreign policy, Trudeau and Freeland remain fused to Harper's ideological hip vis-à-vis Israel. This has meant that Canada continues to unquestionably support Israel at all times, on any matter, at any cost.

This has also meant Trudeau and Freeland either have not read or dismissed outright the scathing opening paragraphs of a June 4, 2017, Human Rights Watch press releasedetailing the watchdog's core findings of Israel's 50-year occupation of the West Bank and Gaza Strip which read:

"Fifty years after Israel occupied the West Bank and Gaza Strip, it controls these areas through repression, institutionalized discrimination, and systematic abuses of the Palestinian population's rights…

At least five categories of major violations of international human rights law and humanitarian law characterize the occupation: unlawful killings; forced displacement; abusive detention; the closure of the Gaza Strip and other unjustified restrictions on movement; and the development of settlements, along with the accompanying discriminatory policies that disadvantage Palestinians."

That was six months ago. Trudeau and Freeland's response: silence.

But on November 10, Freeland tweeted the following message to her followers and Canadians: "As we mark the memory of Kristallnacht in 1938, a night of anti-Semitic violence and a turning point in the vicious persecution of Jews, let it be a reminder that we must stand up against prejudice and hate, wherever it appears."