A year of corruption: Retrospective on 2017 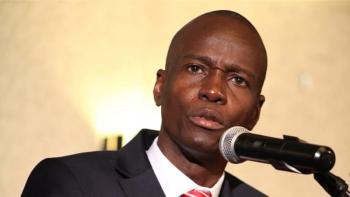 He made that formulation memorable by saying in September that those were the five main problems Haiti faces. Such straight-faced hypocrisy adds to the surreal nature of 2017, where the most patently corrupt politicians pretend to lead in the fight against corruption.

“I alone have the solution for the question of corruption,” Moïse declared on National Television on Dec. 3. “Nobody else!”

Having won the controversial, anemic elections of Nov. 20, 2016, Moïse assumed office on Feb. 7 under indictment for money-laundering, which was painstakingly detailed in a 68-page report in August 2016 by the government’s Central Financial Intelligence Unit (UCREF). Moïse tried to fire UCREF’s director general Sonel Jean-François in April, but his proposed replacement refused the post. Finally Moïse succeeded in replacing Jean-François with a lackey on Jul. 6, prompting the ousted UCREF chief to say: “We have a dictatorship taking shape.”

The next day, Moïse also replaced Lionel Constant Bourgoin as head of the government’s other watchdog agency, the Anti-Corruption Unit (ULCC), with Maj. David Bazile, who sits on the board of Moïse’s Haitian Bald Headed Party (PHTK). Bazile was also former president Michel Martelly’s Interior Minister.

Meanwhile, Haiti’s Senate president, Youri Latortue, whom the U.S. Embassy has characterized as a “Mafia boss,” “drug dealer,” and “poster-boy for political corruption,” headed a corruption-investigating Senate commission which issued a report in August 2016. But its findings were so deficient that a second Senate commission of inquiry, headed by Sen. Evallière Beauplan, put out an October report on official misuse of funds from Haiti’s PetroCaribe account from 2008 to 2016. The revelations in the new report that there was "large scale state fraud" have caused a sensation, but it remains to be seen if the Senate will take any legal action in the courts to punish wrong-doers. A Nov. 30 special Senate session to debate initiating legal action was allegedly scuttled by President Moïse.

“Sen. Jean Renel Senatus of the opposition alleges that on the eve of the anticipated senate special session..., President Moise initiated a meeting with 19 senators from his own party to vote against the resolution, which recommended serious corruption charges, such as extortion and embezzlement of public funds against many close to President Moise himself, including his Chief of Staff, Wilson Laleau, and Secretary Yves Germain Joseph, among many others,” reported the website hougansydney.com.

The odds for meaningful legal action do not look good because, as Sonel Jean-François said: “In Haiti, all the power is centralized in Mr. Jovenel Moïse. He has the executive, he has the legislative, he has the judiciary.”

“The suspicion of the money-laundering case against him will taint and weaken his entire presidency,” Fils-Aimé wrote. “It is true that he will hold almost absolute power with the support of the majority of parliamentarians, most of whom have as bad a reputation as him. Thus, he will be free from any constraint to continue the PHTK policy of turning over the country’s natural resources to the multinationals while paving the way for the embezzlement of public funds.”

Nonetheless, a popular uprising against corruption and President Moïse has grown since September. Although it remains essentially leaderless, it clearly expresses the deep anger, frustration, and determination of the Haitian masses to continue fighting for justice and democracy.

The following is a brief review of significant dates from the past 12 months.

The Provisional Electoral Council (CEP) of Léopold Berlanger announces the final results of the Nov. 20, 2016 presidential elections, which were supposedly won by banana businessman and Haitian Bald-Headed Party (PHTK) candidate Jovenel Moïse with only 10% of Haiti’s 6.2 million electorate.

In Port-au-Prince, Haitian police, backed by the U.S. Drug Enforcement Agency (DEA), ambush and arrest for drug trafficking Senator-elect Guy Philippe, the former leader of the armed “rebels” in the 2004 coup d’état against then President Jean-Bertrand Aristide.

Sen. Youri Latortue is elected president of the Senate and Dep. Cholzer Chancy as president of the House of Deputies. Both are members of the Haiti In Action (AAA) party, founded by Latortue.

Jovenel Moïse sworn in as the 58th President of the Republic of Haiti.

Former President René Préval, 74, dies of a heart attack in the Port-au-Prince suburb of Laboule. Poisoning had been suspected by many but was ruled out in an autopsy.

Police fire on the cortege of former President Jean-Bertrand Aristide, wounding two. He had testified for over two hours before Judge Jean Wilner Morin as part of an investigation into money-laundering charges against Jean Anthony Nazaire, who used to act as Aristide’s security chief.

Haiti’s Organization of American States (OAS) Ambassador Jean-Victor Harvel makes a speech in support of Venezuela against Washington’s efforts to sanction the country for violation of the Democratic Charter.

Sandra Honoré, the civilian head of the United Nations Mission to Stabilize Haiti (MINUSTAH), announces that in October the MINUSTAH will be replaced by the UN Mission to Support Justice in Haiti (MINUJUSTH), a force of 1,300 police officers.

Former Haitian paramilitary leader and Senator-elect Guy Philippe cuts a plea bargain with the U.S. Attorney’s office to get a lighter sentence in return for pleading guilty to just one count of money laundering. The U.S. government dropped its other two drug trafficking charges, with penalties up to life in prison. Although the charge to which Philippe pleaded guilty – “Conspiracy to Launder Monetary Instruments” – carries a 20 year maximum sentence, prosecutors recommended Philippe be sentenced to only nine years.

On International Workers Day and Haiti’s Agriculture and Work Day, the Moïse government launches in the Artibonite the “Caravan for Change,” a traveling combination of political rally and carnival with music and speeches.

Heavy rains cause flooding in Port-au-Prince and the North.

The U.S. Department of Homeland Security (DHS) announces that it will extend the Temporary Protected Status (TPS) designation for some 60,000 Haitians living in the United States for only six months rather than the usual 18 months. The announcement augurs the impending termination of TPS for Haitians.

Workers demonstrate during a continuing strike at the government’s Office of Vehicle Insurance (OAVTC).

DHS Secretary John Kelly visits Haiti for one day to assess whether to extend TPS.

UN Security Council visits Haiti. The visit was instigated by Bolivia, which was SC president during June.

President Moïse fires Sonel Jean-François as head of UCREF and, the next day, Lionel Constant Bourgoin as the head of ULCC. They are replaced with Joseph Oldy Bellegarde & Maj. David Bazile, two PHTK lackeys.

Klaus Eberwein, the head of the Fund for Economic and Social Assistance (FAES), apparently commits suicide in Miami. Some suggest that it may have been murder, because he was to testify before a Senate committee about corruption a few days later.

In Léogâne, the Defense Ministry organizes a recruiting drive for the new Haitian army, to which hundreds of young people turn out in search of a salaried job.

Hundreds of Haitian refugees flee over the U.S. border to Canada. They are temporarily housed in Montreal’s Olympic Stadium.

The opposition holds a weekend meeting in Arcahaie. Despite the attendance of many prominent politicians and activists and many stirring speeches, nothing concrete comes out of the meeting.

Sen. Antonio “Don Kato” Cheramy denounces a draft austerity budget, disrupting a Senate session where it is being read. Demonstrations grow over the next three months.

President Moïse travels to New York to address the UN General Assembly on Sep. 21. His speech is mostly platitudes, but he supports Taiwan, although China has offered $2 billion to overhaul Port-au-Prince’s infrastructure. Some 300 protesters greet Jovenel when he visits the church of Pastor Nicholas in Brooklyn on Sep. 20, and many protest outside the UN during his speech the next day. A victory parade from the airport after his return to Haiti on Sep. 22 is disrupted by rocks and bottles thrown from the slums that line the route to the Palace, forcing Jovenel and his retinue to flee in their cars.

Many demonstrators arrested by police during ongoing anti-government protests are imprisoned without charges in the National Penitentiary.

As protests flare, the Interamerican Development Bank (IDB) president Luis Alberto Moreno visits Haiti to give financial and political support to Jovenel Moïse and his “Caravan for Change,” which he urges the opposition to support.

Leader of the Dessalines Children party, Moïse Jean-Charles falls ill during a demonstration. He travels a few days later to Cuba for medical treatment.

Sen. Evallière Beauplan’s Commission of Inquiry releases its report alleging "large scale state fraud" in the spending from the PetroCaribe fund from 2008 to 2016.

A bloody armed confrontation between the police and a gang in Port-au-Prince’s Grande Ravine neighborhood leaves two cops and five civilians dead.

During the anniversary celebrations of the Battle of Vertières, President Moïse officially resurrects the Haitian Army which was demobilized in 1995 by President Aristide. It currently has 150 soldiers.

President Moïse visits Caracas, Venezuela, where he is received by and meets with President Nicolas Maduro.

Hundreds march in a spirited anti-corruption demonstration in Port-au-Prince.

The Haitian government offers opposition political parties millions of gourdes in subsidies, which many perceive as a form of bribery and appeasement.

Haitian government tries to coopt the progressive and revolutionary legacy of Manno Charlemagne when holding a national funeral for him on the Champ de Mars in Port-au-Prince. He was buried later that afternoon in Verettes, a small town in the Artibonite Valley.