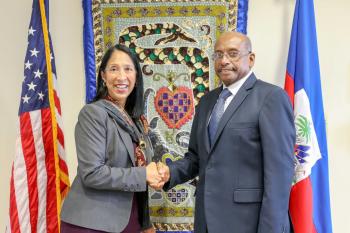 For decades, Numas has been the Secretary General of the Independent General Organization of Haitian Workers (OGITH), a union funded by U.S. “soft power” agencies like the CIA-linked American Institute for Free Labor Development (AIFLD) and the International Confederation of Free Trade Unions (ICFTU). It is also supported by the Solidarity Center (AIFLD’s successor), one of the four main tentacles of the National Endowment for Democracy (NED), a quasi-governmental foundation spun off from the CIA in 1983. The NED’s funding was almost doubled from $180 million to $300 million in December.

The new nine-member CEP to which Numas was named has been denounced by Haiti’s opposition leaders as illegal and unilateral. But the Trump administration has steadfastly supported Moïse in his brazen tactics, and a senior State Department threatened “consequences for those who stand in the way.”

In 2006, two years after the second coup on Feb. 29, 2004 against President Jean-Bertrand Aristide, Numas advised the U.S. Embassy on how to combat and vanquish the armed anti-coup resistance based in Port-au-Prince’s largest slum, Cité Soleil, revealed a secret U.S. Embassy cable provided by Wikileaks to Haiti Liberté in 2011.

“According to Numas, there are essentially four  categories of people within Cite Soleil (in order of size, from smallest to largest): (1) Well-organized, well-armed, and violent gangs  who actively seek the return of former-president Aristide; (2) Unorganized, but armed and violent Aristide supporters; (3) Unorganized, unarmed, but potentially violent Aristide partisans; and (4) The remaining unarmed population who are sympathetic to Aristide and who can be easily manipulated by the gangs,” wrote then U.S. Ambassador Janet Sanderson in the May 16, 2006 cable. “He suggested that any programs offered by [newly inaugurated president René] Préval and/or the international community [code for the U.S. and its allies] should start from the outer layer inward, targeting the largest fourth category first and confronting the toughest elements last.”

“NED funding favored three conservative groups up until 1990,” explained Ruth Blakeley in “State Terrorism and Neoliberalism: The North in the South.” “These were the International Institute for Research and Development (IHRED) which had been founded in 1986 with NED assistance; and the two conservative unions, FOS [Federation of Syndicated Workers] and the General Organization of Haitian Workers (OGITH).”

Tellingly, the head of the last CEP was Léopold Berlanger, IHRED’s founder and leader. His CEP oversaw the anemic, fraud-plagued election of Jovenel Moïse in 2016, in which less than 20% of Haiti’s electorate took part.

Double-crossed by Jovenel Moïse, Berlanger’s CEP resigned en masse in July. But the new CEP also has a NED agent in its leadership in the person of Patrick Numas.

OGITH was a leading member of the “Group of 184,” a “civil society” front conceived, funded, and coordinated by the International Republican Institute (IRI), another of the four main NED tentacles. Along with a Contra-style armed “rebel” band, led by death-squad leader Louis Jodel Chamblain and now-imprisoned drug trafficker Guy Philippe, and a front of political parties known as the “Democratic Convergence,” the “Group of 184″ was one of Washington’s principal chariots in overthrowing Aristide’s government in 2004 and smashing his party, the Lavalas Family Political Organization.

Although allied with many business organizations of Haiti’s sweat-shop owners like CCIH (Chamber of Commerce and Industry) and CRESFED (Center of Economic and Social Research and Training) in the “Group of 184,” OGITH played the critical role of trying to portray Aristide’s government as anti-union.

Interviewed by the ICFTU in May 2002, during the height of the destabilization campaign against Aristide, Numas was asked a leading question: “Being a trade unionist is still a very dangerous job in Haiti?”

“We have maintained contacts with the grass roots, otherwise Lavalas would have eliminated them by now,” Numas responded. “There are also many yellow unions that assist the Lavalas government. Their existence undermines our attempts to create a unified movement.”

While Washington’s labor allies were infiltrating and funding many of Haiti’s unions – like OGITH– in an effort to bring down Aristide, they were silent when the assembly factory owners who led the coup savagely cracked down on workers afterwards. The ICFTU, NED, and others “work[ed] to support and strengthen labor unions that agitated for the ousting of Haiti’s democratically elected government” but then “refused to condemn the massive layoffs and persecution of public sector workers and trade unionists committed by its illegally-imposed successor,” explained Jeb Sprague in “Failed Solidarity: The ICFTU, AFL-CIO, ILO, and ORIT in Haiti”.

The ICFTU was formed in 1949 “to compete with communist trade unions,” explained cold warrior Eric Chenoweth of the Washington-based Institute for Democracy in Eastern Europe (IDEE) in an interview with NED-cousin agency Freedom House, because “the Soviet trade unions came to dominate the World Federation of Trade Unions.”

“Numas has been a consistent and reliable source of information regarding the political situation, particularly in the capital’s volatile neighborhoods,” U.S. Ambassador Sanderson explained in her May 2006 secret cable. “The strategy that Numas outlined for Cité Soleil corresponds roughly to the approach taken by USAID [the U.S. State Department’s Agency for International Development] and other development agencies in Bel Air,” another rebellious Port-au-Prince slum.

The 2,000 secret State Department cables related to Haiti which Wikileaks gave to Haiti Liberté in 2011 were part of some 250,000 that the publisher gave to dozens of other media organizations around the world to provide a glimpse of the inner workings and true goals of the U.S. empire. Wikileaks’ partners were required to responsibly redact the cables so that no innocent persons would be endangered by the revelations.

Today, Julian Assange is on trial in London, fighting an extradition request from the U.S. government, which charges that the release of the cables and other secrets (like a video of a U.S. military helicopter machine-gunning innocent civilians and journalists in Iraq) caused harm to some persons. Fleeing U.S. persecution, Assange has effectively been imprisoned for the past eight years, first after he sought refuge in the tiny Ecuadorian Embassy in London in June 2012 and then, since April 2020, in solitary confinement in London’s Belmarsh high-security prison.

The on-going trial has clearly shown that Wikileaks’ revelations were responsible, in the public’s interest, and caused harm to nobody. Light was shed on shocking U.S. government crimes and malfeasance. Revenge is the motive behind the dogged U.S. pursuit of Assange, who is in very poor mental and physical health. The charges against him are purely political and legally nonsensical. He is not a U.S. citizen or resident. His only crime is having revealed truth. Washington seeks to make an example out of him in its attempt to intimidate journalists worldwide as a part of its war against journalism.

“Transparency and accountability are moral issues that must be the essence of public life and journalism,” Julian Assange told famed British journalist John Pilger when they met a decade ago. “Assange believes that journalists are the agents of people, not power: that we, the people, have a right to know about the darkest secrets of those who claim to act in our name,” Pilger explained in a recent article. “If the powerful lie to us, we have the right to know.”

The secret U.S. State Department cables reveal the truth about actors like Patrick Numas. The powerful are lying when they tell the Haitian people to trust him to carry out a free and fair national election, much less defend workers’ rights. Wikileaks has given the gifts of truth and transparency to Haiti’s people, who have the right to know.