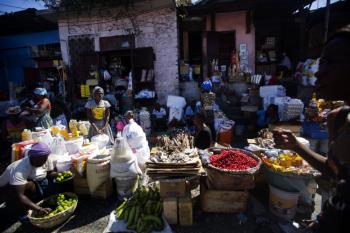 Vendors wait for clients at an open-air market in Port-au-Prince, Haiti, on Feb. 18, 2019, when businesses and government offices slowly reopened across Haiti after more than a week of demonstrations. (Dieu Nalio Chery/AP)

Life in Haiti slowed to a standstill last month when national protests began, once again, in the face of a rising cost of living and a national currency in free fall. Outside of Haiti, media coverage of the crisis has focused primarily on violence, looting and corruption.

Interviews with foreign volunteers, tourists and missionaries highlight that they are trapped or stranded, and that in some cases they have been evacuated by helicopters as if from a war zone. The U.S. Department of State has urged citizens not to travel to Haiti “due to crime and civil unrest.” The Core Group --representatives from the U.N., European Union, Organization of American States and six countries including the U.S. — issued a statement deploring violence and property damage and stressing that “change must come through the ballot box.”

We are doctors who divide our time between Boston and rural Haiti, where we work in HIV clinics staffed by Haitian physicians, nurses, pharmacists, social workers and community health workers, supported by Partners In Health and its sister organization, Zanmi Lasante. We have witnessed the impacts of the worsening economic state in Haiti over the past few years, and we were in Haiti during the most recent protests and during those in the fall of 2018. We believe that the prevailing characterizations of the deteriorating situation in Haiti by the American media and government are inadequately informed by history and that a broader view reframing of the crisis is essential.

Although some of the demonstrations have turned violent, most have been peaceful. The demonstrators are calling for the resignation of Haiti’s president, Jovenel Moïse, arguing that he has failed to deliver on promises to improve the country’s economic conditions. At the center of the anti-government movement are accusations of mismanagement and the theft of $2 billion from PetroCaribe, a discount oil program operated by Venezuela and intended to generate savings to fund socioeconomic development. However, it is clear that the PetroCaribe corruption is just one of many factors that have led to the economic despair voiced by the thousands of Haitians who have taken to the streets or desperately sought refuge outside of Haiti.

The impoverishment of Haiti has not been accidental. It cannot be explained only by the recent actions of corrupt Haitian government officials, and it cannot be understood without examining historical events. Since Haiti won its independence from France in 1804 -- the only nation founded as the result of a slave revolution — a series of policies by foreign entities have stifled development and precipitated economic catastrophe.

In 1825, France, in exchange for recognizing Haiti’s sovereignty, extorted today’s equivalent of $21.7 billion from Haiti, paid over a period of 122 years, as compensation for lost property — the bodies of the Haitians themselves. Haiti's subsequent crippling debt prompted the U.S. to invade Haiti in 1915 and occupy the country for 19 years. The U.S. expropriated the holdings of Haiti’s treasury, designated 40 percent of Haiti’s national output towards debt repayment, enforced a system of forced labor, and murdered thousands of Haitians who resisted the occupying forces.

The impoverishment of Haiti has not been accidental.

Haiti’s more recent history has been marked by substantial involvement of foreign states in its democratic processes. For the past three decades,  the U.S. -- consistent with its practices throughout Latin America -- has wielded foreign aid, forced tariff reductions and financed coup d'etats to ensure that Haiti remains aligned with U.S. interests. The current protests can be understood, in part, as the demonstrators’ lack of confidence in an electoral process they view as fraudulent and influenced by outsiders.

Current international events have also influenced Haiti's protests. President Trump has made offensive, stigmatizing and false statements about Haiti and Haitian-Americans, and his administration’s Haiti policy can be summarized by an attempt to end Temporary Protected Status (TPS) for some 59,000 Haitians who have lived and worked legally in the U.S. since the 2010 earthquake in Haiti. Although the U.N. has admitted responsibility for introducing cholera to Haiti, creating an epidemic that has killed more than 10,000 Haitians, U.N. countries have pledged a pitiful amount of funds to address the problem. Finally, many Haitians see their government’s recent vote to no longer recognize Venezuela’s president -- a decision they view as a political maneuver, orchestrated by the U.S., against Haiti’s long-standing ally -- as another reason for the ongoing protests.

To describe the Haitian protests as merely “anti-corruption” is to willfully ignore the complicity of the U.S. in installing and upholding corrupt leaders in Haiti for its own benefit. To focus on the impact of “violent” protests on a few Americans and Canadians in Haiti is to obscure the structural violence that U.S. policies have levied on Haiti throughout its history. The current crisis can only be understood after acknowledging the culpability of foreign countries and centering the discussion on the experience of Haitians who are disadvantaged by complex systems of power.

We stand in solidarity with our Haitian colleagues, patients and friends who live the daily reality of the conditions brought about by the centuries of history we have only briefly touched upon. As guests in Haiti, we hold ourselves accountable for interrogating the ways in which the “Republic of NGOs” undermines Haiti’s development, and we are committed to working to support public institutions. As Americans, we petition our government to reverse the unjust termination of Temporary Protected Status for the Haitian people who are now a part of our communities. We implore the American media and public to pay close attention to our government’s ongoing role in the events that are unfolding and to insist on accountability when warranted.