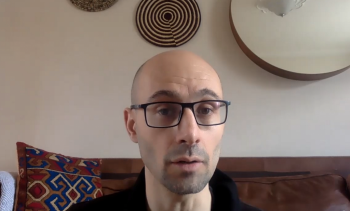 Canadian activist and author Yves Engler discusses how he recently interrupted talks by the Canadian Foreign Minister and Deputy Prime Minister to call them out for attempting to start WWIII by helping NATO use Ukraine as a proxy against Russia. Canada has massively increased military spending and devoted $590 million for weapons to Ukraine. He considers the Russian invasion to be both rational and imperialistic. Canada has been a proponent of anti-Russian nationalist forces in Ukraine since before Ukraine’s independence from the Soviet Union. During the 2004 Orange Revolution the Canadian Ambassador openly admitted they were coordinating the opposition in Ukraine. The Canadian government played a key role in the 2014 coup, where protestors used the Canadian Embassy. It’s said that a former Canadian defense minister is the godfather of the modern Ukrainian military. He’s not seeing an off-ramp to the conflict. The media is completely pushing the drumbeats of war.