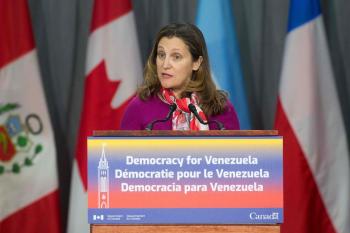 Freeland distinguished herself as a vigilant defender of democracy and “rule of law” proponent – especially where those things applied to other governments. But, and it is an enormous one; do Ms. Freeland’s high standards apply to how this country, Canada conducts its business in the World?

Whether supporting coups d’état in Chile, Haiti, Venezuela, Nicaragua, Honduras, Ukraine, and most recently Bolivia, or waging regime change wars against countries like Libya, Syria, and the Former Yugoslavia, Canada has a curious, if not unique, way of expressing its support for those things the former foreign minister says she cherishes.

Yves Engler is a Montréal-based activist, essayist, and author. His articles appear at Dissident Voice, The Palestine Chronicle, Rabble.ca, and Pacific Free Press among other places. The latest of his ten books, ‘Left, Right: Marching to the Beat of Imperial Canada‘ questions why, despite all evidence to the contrary, Canadians still suffer under the delusion that they and their nation’s government are “a benevolent force in the world”?

Yves is also an key organizer with Disruption Network Canada who has, along with Canadian human rights activist lawyer and journalist, Dimitri Lascaris, mobilized activists to challenge politicians through peaceful, direct action.

Most Canadians would be surprised to learn that the sun never sets on the military their taxes pay for.

This country is not formally at war yet more than 2,100 Canadian troops are sprinkled across the globe. According to the Armed Forces, these soldiers are involved in 28 international missions.

There are 850 Canadian troops in Iraq and its environs. Two hundred highly skilled special forces have provided training and combat support to Kurdish forces often accused of ethnic cleansing areas of Iraq they captured. A tactical helicopter detachment, intelligence officers and a combat hospital, as well as 200 Canadians at a base in Kuwait, support the special forces in Iraq.

A comparable number of troops are stationed on Russia’s borders. About 600 Canadians are part of a Canadian-led NATO mission in Latvia while 200 troops are part of a training effort in the Ukraine. Seventy-five Canadian Air Force personnel are currently in Romania.

Some of the smaller operations are also highly political. Through Operation Proteus a dozen troops contribute to the Office of the United States Security Coordinator, which is supporting a security apparatus to protect the Palestinian Authority from popular disgust over its compliance in the face of ongoing Israeli settlement building.

Imagine a self-declared progressive media outlet saying they don’t cover racism, patriarchy or the dispossession of First Nations because they don’t have the expertise. Most on the left would laugh or label that outlet racist, sexist and pro-colonial. But that seems to be the National Observer’s position regarding coverage of Canadian imperialism.

While they publish international affairs stories mimicking Ottawa’s view of the world from Canadian Press – owned by Power Corporation, Globe and Mail and Torstar – they cannot allow a critical voice who has written more than a half dozen books about Canadian foreign policy.

Recently I submitted an opinion article about Canada’s role in Haiti to Observer Managing Editor Laurie Few. Signed by Solidarité Québec-Haiti #Petrochallenge 2019 members Marie Dimanche, Frantz André and myself, Few agreed to publish a story that began by discussing recent efforts to burn the Canadian Embassy in Port-au-Prince. In fact, she asked for an update about a demonstration Solidarité Québec-Haiti organized last Sunday and pictures from the march.

After the story failed to appear, I asked Few what was happening. Observer editor-in-chief Linda Solomon Wood replied that they don’t cover Canadian imperialism in Haiti. “There are many topics we simply don’t get into because we don’t know the issue well enough,” Wood wrote. “Before I would want to publish opinion on Haiti, I would want to have an in-depth reported feature or investigation from on the ground in Haiti.”

This was an interview done on September 16th 2019 with Yves Engler Canada's finest dissident historian, media critic, NGO critic. He is truthteller/mythbuster and author of several books check him out at www.yvesengler.com. I was interviewing him for Black Agenda Report on Canada's real role as an imperialist nation once a partner in crime to the UK empire now a partner in crime to American or Anglo-American empire also Canada independently just another Western bully.

We also talked about Canada's role in Haiti from 2004 onwards, the attempts to overthrow the Maduro government in Venezuela, and Canada's bloody role in the DRC, Rwanda propping up Kagame,Uganda, Canada's regressive influence in the Caribbean, and the imperial legacy of Canadian Prime Minister's from Pierre Trudeau, Brian Mulroney, the current Trudeau government.

If that's not enough we also discussed the Canadian/Western first ethos of the NDP, how the Waffles though trying to keep the NDP into a social democratic party where left-wing nationalists, the struggle for Canadian dissenters like Yves in galvanizing an anti-war/imperialist movement in Canada but US leftists like Michael Moore, Ralph Nader and others constantly telling US and Canadian and global audience that all is hunky dory in Canada on both domestic and foreign policy except when it comes to bad apples like Stephen Harper and Justin Trudeau. The left's role in propping up imperialism, the left's selective anti-war positions, the negative roles in NGOS in propagating the left and propping up imperialism.

We even discussed the plight of Black Canadians and racism experienced, and had an interesting but brief discussion how injustice in the US towards blacks, Indigenous and others is strongly highlighted in Canada and Australia but the institutional racism both nations inflict harshly particularly on its Indigenous people is downplayed enormously and how its used to deflect injustice happening in both nations. It was a great conversation.

Sadly I do not work or do work for Black Agenda Report but this interview was on behalf of them so their publication will be named dropped quite a bit in this interview and despite not being part of the BAR team I encourage listeners to visit Black Agenda Report.com, subscribe to them by e-mail and check out on soundcloud Black Agenda Radio and Black Agenda Commentaries for excellent news, commentary, and analysis from a Black Left perspective and brilliant media criticism, NGO criticism, and anti-imperialist viewpoints evening going after left leaning folk who jump the shark. Do enjoy!