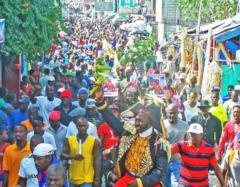 By Travis Ross and Roger Annis, published in the 'Speakout' feature section of Truthout.org, Monday, January 12, 2015 (This article was translated and published in Spanish in Uruguay. Find the Spanish version here.)

Five years following the January 12, 2010 earthquake that struck the capital city of Haiti, the loudly-trumpeted reconstruction of the country is still an unrealized dream. The beginning of the year 2015 finds Haitians engaged in a massive movement of political protest and empowerment seeking to renew, against all odds, their 210-year old nation-building project. Winning a renewal means setting aside the false promises and cruel betrayals of the past five years by the big governments and aid agencies of the world.