After a decade of misrule, the people of Haiti have had enough 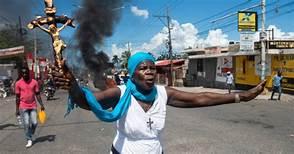 On Sunday, the people in Port-au-Prince filled its broad boulevards, blowing the traditional celebratory one-note vaksen horn, waving Haitian flags and branches of trees, and singing improvised songs, as well as the rousing Haitian national anthem. And I mean “filled,” curb to curb and out of sight against the horizon, coming and coming. There were similar protests in six other cities in Haiti. The Port-au-Prince demonstration was not like the lesser, though important, protests we’ve seen in Haiti in recent years against cost-of-living increases and food prices and gas taxes and government corruption. This well-organized, massive protest was an economy-stopping, throat-swelling, regime-changing political demonstration, more like the ones that preceded and followed the ouster of the Duvalier dynasty in February 1986. “Aba diktati,” read many of the handwritten pancartes held up by people in the surging crowd. Down with dictatorship.

A population with too much experience in the methods of dictatorship sees in President Jovenel Moïse an emerging strongman. In August 2020, a respected human rights group accused his government of outright collusion with the gangs in a Port-au-Prince shantytown, in a report ominously titled “Assassinations, Ambushes, Hostage-Takings, Rape, Arson, Home-Invasions.” Another much-feared gang, under the leadership of the strangely charismatic criminal Jimmy Cherizier (aka Barbecue), has staged marches honoring Moïse. Meanwhile, Moïse allowed the Haitian legislature to lapse, and has been ruling by decree for more than a year now. He is trying to amend Haiti’s constitution to permit consecutive presidential terms, which were outlawed in order to prevent the development of presidential cults of personality, as in the Duvalier era. Last month, Moïse, facing rising unrest, falsely accused opposition leaders of staging a coup against him and of planning to assassinate him, and rounded up 23 of them, many still languishing today in one of Haiti’s inexcusable prisons. Among them are health care workers and judges from Haiti’s Supreme Court. Because during this spate of arrests, Moïse also shut down the Supreme Court.

Here’s what’s really going on, and it circles around disputed elections—an incendiary topic that we in the United States now understand more intimately than we used to. Moïse and his predecessor, pop musician Michel Martelly, were each elected in highly questionable votes. Martelly seemed to have lost his election in 2011, but the OAS—with the support of then–Secretary of State Hillary Clinton and her husband, the UN’s special envoy to Haiti, as well as the French and Canadian governments—investigated the balloting and decided that Martelly had won enough votes to participate in the runoff voting. In this OAS-sanctioned runoff, Martelly emerged as the victor. A wide sector of the Haitian public did not believe in this election’s validity.

Five years later, Moïse, tapped by Martelly to run for president after Martelly’s term ended, was elected in balloting with very low turnout and vote-counting issues. That election was annulled, and an interim president installed until a new election could be held, which also suffered from low turnout and questions about the final count, but was eventually validated by the OAS. Along with the OAS, the same outsiders, known as “the international community” or the Core Group, continued to support the Martelly-Moïse relay of the presidential office, and continue to this day. That means they’ve supported a decade of rule by presidents chosen in highly suspect elections.

Martelly’s was a crucial election for all involved, though, because it was the first election after the earthquake of 2010, and the aid moneys that were about to flow into Haiti had all the traditional partners in corruption salivating: politicians, businessmen, contractors, bankers, and the international charitable funders and development investors who also play their part in the depraved dance. It was important to have the right person as president, putting the right people in the way of all the millions and even billions of dollars that were supposed to begin flowing. In Haiti, charitable and entrepreneurial funding goes to members of a class of people already well known to those outside funders: people who are familiar, the people whom those people suggest, Haitians who speak English and have already done business with the donors.

Haitians are almost never surprised to hear who’s received a donation to build a school or a sanitation system or a power plant, or to start or expand a small business; nor are they ever surprised to find that the school, or sanitation system, or power plant has never been actually finally fully built nor the business expanded. And bigger projects, like hotels, agribusiness, mineral extraction, and free enterprise zones, also offered a chance for investment for foreign interests, if the right Haitians were in place to give the go ahead. The people who are left out of this big money giveaway are the people whose misery is the excuse for the funding in the first place: the masses of suffering Haitians.

But the people of Haiti have now had enough. Ras le bol. Enough of the corruption that milks money out of the public coffers, enough of the rampant violence that keeps taking the lives of everyday Haitians, mostly people who can hardly be expected to pay heavy ransoms. And the murders and kidnappings haven’t stopped, even after a seeming hunt by authorities for some of the more egregious gang leaders, and the timid 2020 US sanctions against Cherizier and two government officials for their involvement in the notorious 2018 massacre at the La Saline market in Port-au-Prince. It’s not about one criminal; it’s about a criminal system, supported by very heavy hitters, including the international community.

On Sunday morning, the morning of the incredible and inspiring demonstration against the Moïse government, a beloved and dedicated pediatrician, Ernst Paddy, was killed on the street in Port-au-Prince by five or six heavily armed kidnappers as he resisted his attackers. They reportedly kidnapped his wife, who was with him. The day before, a highly coordinated and dazzling prison escape by the infamous gang leader Arnel Joseph ended soon after in his point-blank execution by the Haitian police, along with 25 other deaths, including the prison director. It’s assumed among Haitians that Joseph was freed and then targeted and killed because of his connections to the Moïse regime and to others involved in violence and criminal retribution. To stop Joseph from talking, in other words. (An estimated 400 more prisoners escaped during the break.) Also this week, a film crew from the Dominican Republic and their Haitian translator were released by gang-associated kidnappers into the custody of the police who had demanded complete control over negotiations for their release and who in turn kept them incommunicado for 44 hours, despite pleas from the Dominican Republic that they be released to the embassy: They were kidnapped again, essentially, the second time by the Haitian National Police.

My WhatsApp feed has been full of blood and guns this week, simply following the lives of Haitians living in a country plagued by systemic corruption and violence. I scroll down and there is Arnel Joseph, in a bloody T-shirt, slumped over a motor bike. Pictures of others killed during the prison break follow. Blood on cement floors, bodies in strange positions. Scroll further, and I find a bleak black-and-white video of the killing of the poor pediatrician. The SUV arriving, the men and their machine guns leaping from within, the doctor dragged from his car… A few messages further down, and there’s a still of the two Dominican cameramen being interrogated by police. More messages and then a video of Dr. Paddy’s grown son sobbing over the loss of his father and the abduction of his mother.

A Haitian protest is never just a mass of disgruntled and hungry citizens. Participants always have certain interests in mind, and particular targets of their anger and frustration. They are filled with purpose and the desire for change. The huge protest yesterday stopped in front of BINUH, the United Nations Integrated Office in Haiti, and called for the removal of its director, Helen Meagher La Lime, by name. La Lime is seen by Haitians as a symbol of the continuing unwanted hand of foreign powers in Haitian affairs. She’s made many unfortunate statements and seems to consort with all the wrong people in Haiti. She’s continued the UN’s almost unstinting support of Moïse, though his recent egregious activities seem to have diminished her enthusiasm slightly. Meanwhile, we have Joe Biden continuing Trump’s support of Moïse—a real slap in the face to the Haitian Americans who voted for him with high hopes.

It’s not as if there aren’t scores of Haitians who are more responsible, politically astute, law-abiding, and patriotic than Moïse. Some have been around for years, and others are newer to the scene. Any one of them or all of them could participate in an interim committee of government that could organize respectable and credible elections. They are lawyers, human rights workers, community organizers, women’s group leaders, doctors, educators—everyone in Port-au-Prince knows them by name; the US Embassy knows them by name. They stand at the ready to do their duty to the Haitian people, I’m sure. But the government currently in place, illegitimately, must get out of the way before this can come to pass. And if recent Haitian history is any guide, no matter how large the peaceful demonstrations against Moïse may grow, he will never leave as long as he retains the unswerving support of the international community.

Amy Wilentz, a Nation contributing editor and Guggenheim fellow, is the author of The Rainy Season: Haiti Since Duvalier; Farewell, Fred Voodoo: A Letter From Haiti; and the novel Martyrs’ Crossing; among other books.