‘All of it is lost.’ Fire destroys Haiti radio station, leaving its future uncertain 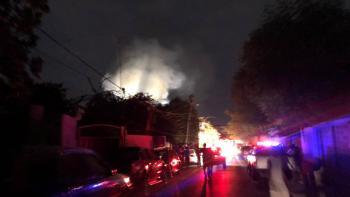 Radio Kiskeya in Port-au-Prince burned on Friday after a house next door caught fire. The radio news station was co-founded by radio journalist Lilianne Pierre-Paul, a human rights advocate and champion of press freedom in Haiti. COURTESY OF HAROLD ISAAC

A fire destroyed a respected Haiti radio station Friday as frantic employees and guests tried to put the flames out with buckets of water while firefighters shouted at one another and struggled to bring the fire under control.

Radio Kiskeya was live on the air when guests attending a show being broadcast from its back yard began smelling smoke around 9:30 p.m. and saw that the house next door in the Boisverna section of Port-au-Prince was on fire. Fearing that the flames would soon spread to the station’s two-story gingerbread construction, radio employees issued an on-air plea for help while desperately trying to get in contact with the Port-au-Prince fire department.

Fire trucks eventually responded, but they were from Delmas, the city next door. Ill-equipped to deal with the raging flames, firefighters barked orders at one another, struggled with fire hoses and eventually had to use water from the radio station’s tanks, witnesses on the scene said.

The fire had not only spread from the house to the radio station but it destroyed both the bottom and top floors, the roof and the offices of station co-owners and journalists Liliane Pierre-Paul and Marvel Dandin. No deaths or injuries were immediately reported.

“Everything happened right before my eyes,” Pierre-Paul, who was in her station’s back yard when the fire started, told the Miami Herald. “I powerlessly witnessed the destruction of a lifetime‘s worth of work; all of it is lost.”

Pierre-Paul’s second-floor office was her own personal archives, flooded with awards, documents and the many portraits loyal and grateful listeners had painted of her over the years in a show of gratitude.

A renowned Haitian journalist known for her no-nonsense demeanor and champion of democracy and press freedom in Haiti, Pierre-Paul is distraught. The station, like others in Haiti where insurance is difficult to come by, is not insured. Pierre-Paul said she does not yet know what she and Dandin will do — what the fire didn’t destroy, water did. Remarking on the slow response from Port-au-Prince’s firefighters’ and the inability of those from Delmas to save the station despite their good intentions, Pierre-Paul said: “There is no State in Haiti.”

Pierre-Paul, Dandin and the late Sonny Bastien launched Radio Kiskeya on May 7, 1994, three years after the trio parted ways with another journalist, Jean Leopold Dominique, the owner of Radio-Haiti Inter, over a labor dispute.

Since then, the station has become a mainstay for news in Haiti with Pierre-Paul and Dandin developing reputations as vocal critics of Haitian government corruption, ineptness and waste. They have also sought to promote a high standard of journalism ethics in a country where the press is often for sale.

When Pierre-Paul, for example, learned that some of her reporters were among a group of journalists who had accepted a Christmas check from the government of President Michel Martelly as “a token of its appreciation,” she forced them to return the money and publicly accused the government during her popular 4 p.m. news and current affairs show of trying to corrupt the press.

Overall, more than a 100 journalists, technicians and others are employed around the country under the Kiskeya brand, which also runs a television station.

“Within the space of a few hours, the fruits of long years of struggle and hard work are gone up in smoke,” journalist Winnie Hugot Gabriel tweeted, adding that she was planning to tape her Radio Kiskeya TV show on citizens’ rights this week. “I share the pain of the whole team following this fire!”

As news spread early Saturday morning, Haitians from all sectors began calling offering to lend broadcasting equipment and asking what can they do to help the radio station remain operational.

The fire, just days before Christmas, is the latest challenge for Pierre-Paul, who during a long journalism career has suffered repression, torture, exile and attacks on her character. On Nov. 28, 1980, “Black Friday,” she was among several Haitian journalists who were rounded up by dictator Jean-Claude “Baby Doc” Duvalier, tortured and then sentenced into exile.

She returned to Haiti from exile in Canada after Duvalier’s Feb. 7, 1986 topping and resumed her journalism career. After a military coup deposed of President Jean-Bertrand Aristide on Sept. 29, 1991, Pierre-Paul again found herself targeted and went into hiding. In recent years, her criticism of Martelly and his governance has earned her the former musician’s contempt. Before leaving office in 2015, Martelly lashed out at her by making her the focus of a sexually suggested carnival tune he recorded and released that year.

That same year, Radio Kiskeya made news when shots were fired at the station.

“Radio Kiskeya is a voice, a place where young men and women can speak freely regardless of their political affiliation,” said onlooker Oreste Dickson, 52, who described himself as an independent journalist with the anti-corruption Petrocaribe Challenge movement. “Today it has burned down and we don’t know under what circumstances it has burned. The authorities have to carry out an investigation, a credible one to determine why it burned.”

Among others who came out to the station to give their support Friday, were Port-au-Prince Mayor Youri Chevry and Haiti Prime Minister Jean Henry Céant along with the justice and culture ministers. “The fire of Radio Kiskeya affects me enormously,” Céant said in a statement posted Saturday morning on his Facebook and Twitter accounts. “It is the memory of several decades of legitimate struggles for the democracy and emancipation of the Haitian people that went up in smoke. The Haitian state will do everything to rehabilitate this national heritage.”