Appeal for sustainers by Haiti Liberté, Haiti's most progressive newspaper 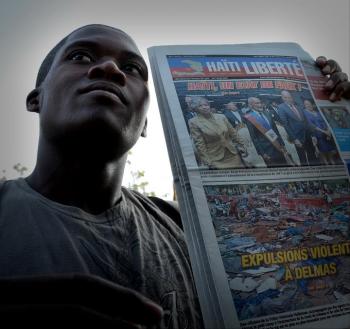 In 2017, The Village Voice, perhaps one of America's most iconic alternative weeklies, stopped printing after 62 years. Many readers were shocked and dismayed. Founded by Norman Mailer and others, it offered a progressive take on politics, culture, and the world.

Haiti Liberté is Haiti's "alt-weekly." Like the Voice, it could stop printing and become just a website. But that would deprive thousands of Haitians, who don't have computers, smart phones, or even, sometimes, electricity, of an essential weekly wrap-up of news and analysis.

Although it's costly, and despite the Haitian business class' advertising boycott, Haiti Liberté must continue publishing for those who need it most.

7) Offers news and analysis about Haiti found nowhere else.

With dozens of writers around Haiti and its diaspora, the paper provides information and insights that are unique and in-depth.

Most of Haiti’s media – radios, TVs, and newspapers – are owned or controlled by the country’s tiny bourgeoisie, which often makes their news selective and their analysis reactionary. Haïti Liberté is owned and run by a collective of Haiti’s most engaged and crusading journalists.

Many of Haïti Liberté ’s correspondents and collaborators are also prominent activists and popular leaders. The paper’s modest revenues help underwrite their work. (It also helps sustain dozens of newspaper criers in towns around Haiti, like the one pictured above.)

4) Provides organizing centers both in New York and in Haiti.

Haitians are found throughout the Americas, Europe, and Africa, but some of the most remote places are in the Haitian countryside, where, as we said, there is often neither power nor Internet. Haïti Liberté can reach them all.

Because of its courageous coverage and editorials, most Haitian businessmen don’t provide the paper with advertising dollars. It relies on small businesses, shopkeepers,... and you.

1) Haiti needs and is ripe for social change.

Haiti's new neo-Duvalierist president and Parliament have ushered in an era of unprecedented corruption. Their malfeasance, along with an austerity budget, have sparked a mass uprising over the past four months, which promises to continue in 2018.

Now, more than ever, Haïti Liberté is needed to continue the work it has carried out over the past decade of promoting justice, democracy, and sovereignty in Haiti. The paper was the principal muckraker exposing corruption and repression under President Michel Martelly (Jovenel's mentor) as well as the crimes of the on-going United Nations military occupation, which has now changed its name to MINUJUSTH.

To fulfill its mission, Haïti Liberté needs your help. Our writers and photographers live under difficult conditions and often in danger. Please contribute what you can to help the paper keep playing its vital role in Haiti.

Become a sustainer of Haiti Liberté.