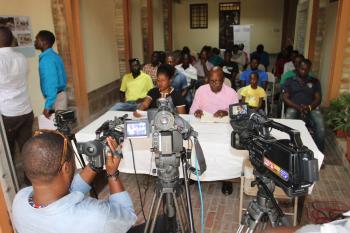 We, the Biwo Avoka Entènasyonal ((Office of International Lawyers, or BAI), Mouvman Jèn Solidè pou yon lòt Sosyete (Movement of Youth United for an Alterntative Society, MJSS), Mouvement de Liberté, Égalité des Haïtiens pour la Fraternité  (Haitian Movement of Liberty, Equality and Fraternity, MOLEGHAF), cholera victims, and all the other organizations who launched a nation-wide mobilization, salute the massive participation of the Haitian people during the various days of  national mobilization across the country since February 7th, 2019.  We would also like to take this opportunity to launch a warning to all politicians and elite business men who believe they can twist the three fundamental claims of the Haitian people, that have both situational and structural dimensions.

In the situational dimension, the Haitian population is making a political and legal claim demanding the departure of Jovenel Moise so that the Petro-Caribe legal proceedings can take place. Because Jovenel’s name has been mentioned in several reports from governmental institutions such as UCREF, Parliament, and the Court of Accounts, as one of the people who has wasted over 4 billion US dollars of the Petro-Caribe fund.

In the structural dimension, the people have in the first place, a socioeconomic claim denouncing hunger, the high cost of living, poverty, the depreciation of the gourde, etc. … Secondly, it is rejecting the “squeeze and suck” system established in the country since 1806, and is demanding a sovereign national conference to address the country’s problematic situation of the excluded masses.

In this regard, we, the Biwo Avoka Entènasyonal (BAI), Mouvman Jèn Solidè pou yon lòt Sosyete (MJSS), MOLEGHAF, and allies are requesting the application of the of the 1987 Constitution (French/ Creole) which requires that the most senior judge of the Supreme Court assume the role of interim president, as it was done in 1990,  and the assembly of a 33-member council to monitor government actions for a democratic, sovereign and popular  transition lasting 2 or 3 years. In the process of this democratic, sovereign and popular transition, the government’s mission will be to organize a national sovereign conference to establish a new inclusive social system that will take up the claims of the Haitian people, such as, free universal public primary education, healthcare for all, social housing for all, clean drinking water for all, etc…

We will finish by asking the population to stay mobilized, stay in the streets, and stay behind the roadblocks, until Jovenel Moïse and his cohorts leave the National Palace to allow the proper conditions to be present so that the Petro-Caribe legal procedure can take place, in the framework of a democratic, sovereign and popular transition  that will organize a sovereign national conference.