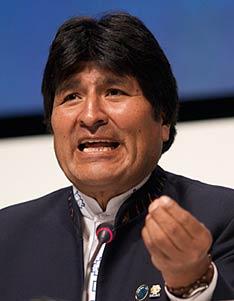 Bolivian President Evo Morales called on Mexico to look southward and help strengthen Latin American integration, in the wake of various announcements from U.S. President Donald Trump targeting Mexico as well as migrants and refugees in the United States.

"I call on our Mexican brothers to look more towards the south, to jointly build unity based on our (shared) Latin American and Caribbean heritage," Morales posted on Twitter.

The message comes just hours after Mexican President Enrique Pena Nieto canceled an upcoming meeting with his U.S. counterpart after Trump announced that the imminent building of a wall along the U.S.-Mexican border, with White House officials adding that Mexico would pay for it "one way or another."

The order was signed as two high-level Mexican envoys were in Washington to prepare for the two leaders' meeting. Trump on Wednesday signed an executive order to "build a large physical barrier on the southern border."

The newly-minted U.S. leader said the wall is needed to keep out illegal migration and drug trafficking, though critics say the barrier will further separate families and experts say it would not solve those problems.

"I express my rejection of the defiant decision adopted by the new president of the United States to impose on the Mexican people the humiliating obligation of paying, and the even more humiliating wall intended to be built to physically separate the United States and Canada from Mexico and Latin America," Samper said.

On Thursday, Trump also floated the idea of slapping a 20-per cent tax on Mexican imports to finance the wall.

Samper added UNASUR was "concerned by the tension in hemispheric relations, resulting from these types of measures, which affect the security and quality of life of our fellow citizens residing in the United States."

Latin America is bracing for what looks likely to be a radical shift from the White House on various issues in the region.