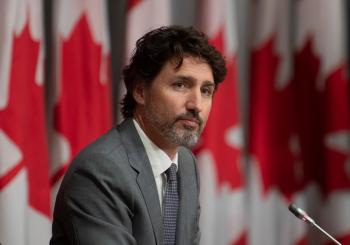 Three-quarters of the world’s mining companies are headquartered in Canada. Canadian mining firms are mired in corruption and human rights abuses around the world, yet Justin Trudeau has reneged on pledges to regulate them and end the abuses.

Canada is home to 75 percent of the world’s mining companies. Firms based or listed in Canada operate approximately four thousand mineral projects abroad. And, as you might expect, many of those projects involve shady corporate practices and violations of human rights.

There have been an astounding number of conflicts at Canadian-run mines. Pick almost any country in the Global South, from Papua New Guinea to Ghana, Ecuador to the Philippines, and you will find a Canadian-run mine that has caused environmental devastation or been the scene of violent confrontations.

Stephen Harper, Canada’s prime minister from 2006 to 2015, faced frequent criticism for his unapologetic promotion of Canadian mining interests. His successor, Justin Trudeau, was supposed to be a breath of fresh air. But there has been far more continuity than change since Trudeau replaced Harper. While Trudeau and his party might pay lip service to environmental and labor rights, in practice, they have served to prop up Canada’s predatory, globe-trotting mining industry.

Mexican president Andrés Manuel López Obrador (AMLO) has recently criticized Americas Gold and Silver Corporation for their disregard of Mexican labor laws. Mexican activists accuse the Toronto-based company of preventing its workers from unionizing at the company mine in northern Mexico. AMLO has also condemned the failure of Canadian mining companies to pay outstanding taxes.

For their part, Canadian diplomats have gone to bat for several companies embroiled in a tax dispute with the Mexican government. Seventy percent of foreign-owned mining companies operating in Mexico have their headquarters in Canada, and the Canadian embassy in Mexico City has repeatedly backed controversial mining projects.

Canadian firms dominate mining in Guatemala as well. Last month, a Canadian legal academic brought a case before Canada’s Federal Court, alleging that the minister of foreign affairs improperly withheld information about the government’s support for Goldcorp. This comes after multiple accusations of human rights abuses directed against the Vancouver-based company, stretching back years.

The Inter-American Commission on Human Rights has called for the closure of Goldcorp’s Guatemalan Marlin Mine due to the company’s failure to consult with indigenous communities. The Canadian government has thus far refused to release any details about its communications with Goldcorp, Guatemala, or the commission itself.

Another Canadian court is currently hearing a separate case about a mining firm in Guatemala. Eleven indigenous women are suing the company Hudbay Minerals (previously Skye Resources), accusing it of complicity in their gang rape, allegedly by security personal at Fenix mine in 2007.

The women first brought the suit to the Superior Court of Ontario in 2011. The Intercept recently published a damning article drawing on internal corporate documents that were released because of this precedent-setting lawsuit. The files paint a picture of overbearing corporate influence, political interference, and widespread intimidation and abuse.

In Brazil, Toronto-based Belo Sun Mining is moving forward with a highly contentious gold mine in one of the most biodiverse regions on Earth. According to Rosana Miranda of the São Paulo–based Amazon Watch, the company’s use of heavy metals and cyanide in the Amazon’s Xingu River will “prompt the last stages of ecocide” in the region. Mining in Brazil has benefited from far-right president Jair Bolsonaro’s hostility to indigenous rights and the environment.

At the beginning of March, protesters pelted Argentinian president Alberto Fernández’s bus over his support for mining in Patagonia. Local and indigenous communities in the southernmost part of the hemisphere strongly oppose the mining projects of Canadian firms Pan American Silver, Yamana Gold, and Eldorado Gold.

Tensions resulting from mining projects are running high in the country. Mining and real estate interests have been pressing the authorities to lift mining bans in the region. A wave of fires, which local people believe were the result of arson, have destroyed land that indigenous communities had protected from miners and developers.

All over the world, Canadian-run mines habitually destroy farmland, harm endangered species, and contaminate drinking water. The mining firms are also responsible for beatings, kidnappings, arbitrary arrests, and killings in local communities. They frequently undermine indigenous self-determination, as national and regional governments give them permission to operate in spite of overwhelming local opposition.

Over the past two decades, thousands of articles, reports, documentaries, and books have detailed Canadian mining abuses abroad. At least four UN bodies have urged Ottawa to hold its companies accountable for their international operations. As the UN Human Rights Committee noted in 2015:

Before Trudeau became prime minister, the Liberals promised to establish an independent ombudsperson on mining. But Trudeau’s government waited nearly four years before creating the Canadian Ombudsperson for Responsible Enterprise (CORE). After a delay of two more years, CORE has finally started taking cases. But it is unable to compel firms to hand over information, putting its effectiveness into question.

By the spring of 2019, all fourteen of the union and NGO representatives advising on CORE’s work resigned, complaining that the government had ignored everything they said. In March of this year, Liberal MP John McKay reportedly confronted Mary Ng, minister of Small Business, Export Promotion and International Trade, over the government’s failure to provide CORE with sufficient investigative powers.

As Emily Dwyer of the Canadian Network on Corporate Accountability observes, Trudeau and the Liberals have created a watchdog that can only function if companies agree “to voluntarily provide information that it requires in order to do an investigation.” CORE is certainly not the kind of robust, independent regulator that was promised.

There’s an obvious explanation for this failure. As a report by the Justice and Corporate Accountability Project has revealed, the country’s two main mining industry associations played a significant part in shaping the development of CORE.

Justin Trudeau has lined up Canadian foreign policy behind the mining industry. Canadian diplomats regularly accompany mining company representatives to meetings with government officials and lobby on their behalf.

Mineral sector companies are major beneficiaries of Export Development Canada’s (EDC) services. The crown corporation has provided tens of billions of dollars — $28 billion in 2014 alone — in financing and insurance to the extractive sector, including many controversial international projects. The Liberals have shown little interest in laying down human rights and environmental standards for EDC.

Trudeau’s party has been keen to boost Canada’s Trade Commissioner Service (TCS), which supports many mining projects. TCS officials based at Canadian diplomatic outposts assist firms with market assessments, problem-solving, and introductions to local officials. “The TCS plays a pretty big role,” according to Ben Chalmers, senior vice president of the Mining Association of Canada since 2018. Trade commissioners “stand behind us and give us the additional credibility that being associated with the Government of Canada abroad brings.”

The Canada-Mongolia Foreign Investment Promotion and Protection Agreement (FIPA) is now in force. This agreement provides substantial protections for Canadian investors in Mongolia, where there are already significant Canadian-owned mining assets.

These “investors’ rights” accords limit the ability of governments to regulate corporations operating on their soil. If the rules interfere with the profits of Canadian mining interests, they can sue the local administration and have their suits heard before private, investor-friendly international tribunals.

The Trudeau government has channeled more than $100 million in assistance for international projects whose real purpose is to support mining. Those projects often come with sanitizing, euphemistic titles such as “West Africa Governance and Economic Sustainability in Extractive Areas,” “Enhanced Oversight of the Extractive Industries in Francophone Africa,” and “Enhancing Resource Management through Institutional Transformation in Mongolia.”

It all adds up to a damning picture. While Trudeau and the Liberals may have put forward some nice rhetoric on the campaign trail to burnish their progressive image and deflect international criticism, their practice in government has been largely the same as Stephen Harper’s, putting the profits of mining companies above human rights and protection of the environment.