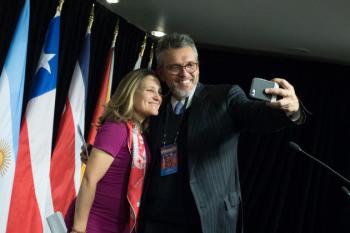 Orlando Viera-Blanco, Venezuela's intern leader's representative in Canada, takes a selfie with Canadian Minister of Foreign Affairs Chrystia Freeland after the press conference for the 10th Lima Group meeting in Ottawa on Feb. 4, 2019.

The last Lima Group meeting, held in Ottawa on Feb. 4, featured the announcement that Guaidó and his opposition-controlled National Assembly would be joining the alliance. Canada also announced new aid to countries neighbouring Venezuela, including Brazil, Peru and Colombia, as Freeland called on “all democratic countries” to join in Venezuela’s “peaceful transition.”

As Canada continues to drum up support for its position globally, a slow flicker of dissent across Canada has been fomenting — and it was evident at the last Lima Group meeting, where about 50 people showed up to protest. While Freeland spoke at the meeting’s closing press conference, two people rushed in front to unfurl a banner that read “STOP the plunder! OUT of Venezuela!” Based in Toronto, these Indigenous Mapuche women from Southern Chile are part of the Women's Coordinating Committee for a Free Wallmapu.

Canadian analyst Yves Engler discusses the history of Canadian humanitarian aid, which all too often works to support US foreign policy interests and have nothing to do with genuine concern for people's suffering.

Lima Group members invoke human rights while trampling on them

Canadian ‘aid’ to Venezuela part of plan to overthrow government

If more people understood that “aid” often goes hand in hand with military intervention there would be less uncritical support for it.

An important, though little acknowledged, principle of Canadian ‘aid’ policy is that military intervention elicits international assistance. Or, in the case of Venezuela ‘aid’ is a tool being used to stoke military conflict.

Canada's stance on Venezuela is undermined by its support for Egypt

I support the Canadian government taking bold unwavering positions toward governments that abuse human rights, are undemocratic or do not respect the rule of law. I believe that prioritizing Canada's economic interests over basic human rights anywhere in the world is a betrayal of the principles we claim to believe in and abide by.

Yet as I watch what's happening in Venezuela, and the position Canada is taking against the Venezuelan government and in support of Juan Guaido as acting president, I wonder why Canada continues to deal normally with other governments, which toss political opponents in jail and use lethal force against protestors.

On Monday, February 5th, Canadian Foreign Minister Chrystia Freeland announced that the 14 countries of the Lima Group — who had actually formed themselves under her direction into this new group on 8 August 2017 in order to overthrow and replace Venezuela’s current President Nicholas Maduro — have now been joined (though she didn’t say to what extent) by the EU, and by 8 other individual countries. She stated:

“Today, we have been joined by our Lima Group partners, from Argentina, Brazil, Chile, Colombia, Costa Rica, Guatemala, Guyana, Honduras, Panama, Paraguay, Peru, and Saint Lucia. We have also been joined in our conversations with our partners from other countries, for this Lima Group ministerial meeting. These include Ecuador, the European Union, France, Germany, the Netherlands, Portugal, Spain, the United Kingdom, and the United States.”

She, along with U.S. President Donald Trump, had, all along, been the actual leaders of this international diplomatic effort, to violate the Venezuelan Constitution blatantly, so as to perpetrate the coup in Venezuela.

Her active effort to replace Venezuela’s Government began with her formation of the Lima Group, nearly two years ago.

This is not humanitarian aid: A Maduro critic in Venezuela slams U.S. plan to push regime change

We go to Caracas, Venezuela, for an update on the escalating standoff between President Nicolás Maduro and opposition leader and self-proclaimed president Juan Guaidó. Guaidó claims he is preparing to deliver humanitarian aid from the Colombian border Saturday. Maduro has rejected the plan, saying the effort is part of a broader attempt to overthrow his regime. This comes as Trump’s special envoy to Venezuela and right-wing hawk, Elliott Abrams, is leading a U.S. delegation traveling by military aircraft to the Colombian border, supposedly to help deliver the aid.

The United Nations, the Red Cross and other relief organizations have refused to work with the U.S. on delivering that aid to Venezuela, which they say is politically motivated. We speak with Venezuelan sociologist Edgardo Lander, a member of the Citizen’s Platform in Defense of the Constitution. “This certainly is not humanitarian aid, and it’s not oriented with any humanitarian aims,” Lander says. “This is clearly a coup carried out by the United States government with its allies, with the Lima Group and the extreme right wing in Venezuela.”

While 21Air has denied allegations of being a CIA front company, or being involved in the illegal shipment of arms into Latin America, The Grayzone sought out more information.

When we arrived, we realized that 21Air had moved its offices to a new office in the same business park. Their former office was located directly adjacent to a small office of Lockheed Martin.

When we reached 21Air’s current offices, the locked door was briefly opened and we saw multiple men working inside on computers.

They clearly did not want to speak to a journalist, and threatened to call the police.

As this report clearly shows, more research needs to be done into the Trump administration’s expanding assault on Venezuela.

The corporate media claims Venezuela has no basic food or supplies, so Max Blumenthal investigated — at a giant supermarket in Caracas.

Like any country at war (and the Trump administration has placed Venezuela under wartime conditions, and is threatening immediate invasion), there have been shortages, and products that can mostly be found on the black market. This should surprise no one: During World War II in the US, a cornucopia of a country not seriously threatened with invasion, there was strict rationing of products like sugar, coffee and rubber.

The Venezuelan government has made food, medicine and pharmaceuticals available at extremely low prices, but much of the merchandise has made its way to the black market, or over the border to Colombia, depriving Venezuelans of supplies and ruining Colombian producers. The government recently abandoned some of the heavy price subsidies, which resulted initially in higher prices. Over the past few weeks, prices have been coming down as supplies stayed in Venezuela, especially as the government gained greater control over the Colombian border to prevent smuggling.

The trucks failed to reach the other side — but that was never really the point of the stunt. As Father Sergio Munoz, a right-wing Venezuelan activist posted on the Colombian side of the border, explained to journalist Dan Cohen, the humanitarian “aid” was a purely symbolic provocation aimed at discrediting Venezuelan President Nicolas Maduro in international eyes and generating waves of destabilizing violence.

By the end of the day, the trucks lined up on the Francisca de Paula Santander bridge were flanked by gangs of guarimberos.

On the eve of another US war for oil, Abby Martin debunks the most repeated myths about Venezuela and uncovers how US sanctions are crimes against humanity with UN Investigator and Human Rights Rapporteur Alfred De Zayas.

Amnesty International‘s reports, by their nature, require readers to trust their honesty and impartiality. But there is ample reason not to trust them. Because Amnesty has ignored grave human rights abuses in plain sight in Venezuela while demonizing supporters of Venezuelan president Nicolás Maduro.

Shortly after meeting with Juan Guaidó (whom Donald Trump and a new Iraq-style Coalition of the Willing have anointed as Venezuela’s interim president), Amnesty put out a report that reads like a barely disguised attempt to reinforce, from a ‘human rights’ angle, the military threats against Venezuela from Trump and his henchmen.

John Pilger: The war on Venezuela is built on lies

Travelling with Hugo Chavez, I soon understood the threat of Venezuela.  At a farming co-operative in Lara state, people waited patiently and with good humour in the heat. Jugs of water and melon juice were passed around. A guitar was played; a woman, Katarina, stood and sang with a husky contralto.

“What did her words say?” I asked.

“That we are proud,” was the reply.

The applause for her merged with the arrival of Chavez. Under one arm he carried a satchel bursting with books.  He wore his big red shirt and greeted people by name, stopping to listen. What struck me was his capacity to listen.

But now he read. For almost two hours he read into the microphone from the stack of books beside him: Orwell, Dickens, Tolstoy, Zola, Hemingway, Chomsky, Neruda: a page here, a line or two there. People clapped and whistled as he moved from author to author.

Venezuelan authorities discovered a cache of weapons and ammunition from the United States and are investigating the intended recipient as the country faces a coup attempt backed by Washington.

According to Endes Palencia, Venezuela’s Deputy Minister for Prevention and Citizen Security, the Venezuelan National Guard and the National Integrated Service of Customs and Tax Administration made the discovery at the Arturo Michelena International Airport in Valencia, Venezuela.

In total, some 19 rifles, 118 magazines, 90 radios and six cell phones were uncovered inside a commercial cargo plane.

The largest international aid organization has demanded that activists at the Venezuela-Colombia border not use the insignia of the Red Cross, which isn’t participating in what Caracas has dismissed as a US “propaganda show.”

The Red Cross learned that some “people not affiliated” with the agency are trying to disguise themselves as aid workers to smuggle cargo for Venezuela’s opposition across the closed frontiers.

“They might mean well but they risk jeopardizing our neutrality, impartiality & independence,” the International Federation of Red Cross and Red Crescent Societies said.

A core concept of “Americanism” is the belief that the United States has a God given right to control all of the Americas in the name of democracy and freedom--but in reality, for plunder and commercial interest - historian Gerald Horne joins Paul Jay.

As former UN Independent Expert on the Promotion of a Democratic and Equitable International Order (2012-2018) I would like to urge you to once again make your voices heard and make concrete proposals for mediation and peace in the context of the Venezuelan crisis.

The most noble task of the United Nations is to create the conditions conducive to local, regional and international peace, to work preventively and tirelessly to avoid armed conflicts, to mediate and negotiate to reach peaceful solutions, so that all human beings can live in human dignity and in the enjoyment of the human right to peace and all other civil, cultural, economic, political and social rights.  I am particularly worried by the Orwellian corruption of language, the instrumentalization and weaponization of human rights and now even of humanitarian assistance.