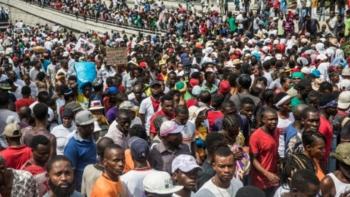 Thousands of Catholics demanding the resignation of Haiti's president marched through the capital Tuesday, becoming the latest group to join an outcry against him.

They gathered outside one of the main churches in Port-au-Prince and denounced President Jovenel Moise as corrupt and incompetent.

Over the past year, Haiti has sunk into political crisis amid anti-corruption protests demanding Moise's resignation.

"Jovenel, make a wise decision and resign. What are you president of? There is nothing in this country. No food, no hospitals, no schools," said protester Fausta Maisonneuve, who held a rosary in her hand.

Since coming to power in February 2017, Moise has had to face the anger of an opposition movement that refuses to recognize his victory in an election widely seen as dubious.

Anger mounted in late August due to a national fuel shortage, and protests turned violent.

In recent weeks, various professional or social groups have taken to the streets against the president one by one, such as university students and artists.

The Catholics that came out Tuesday were mainly young people who prayed aloud as they walked.

"We see that the president cannot run the country. He is incompetent. He must resign because the social situation has become critical and deplorable," said Osma Joseph, who studies education.