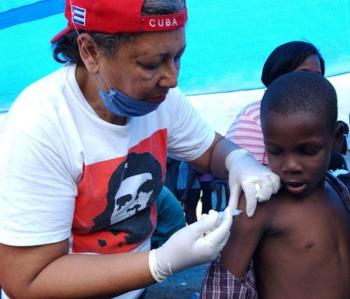 A Cuban doctor administers a shot to a Haitian child. Thousands of Cuban doctors have worked in Haiti over the past two decades.

Haiti commemorated on Dec. 4 the arrival 20 years ago of hundreds and doctors and other Cuban health experts to care for victims of Hurricane George, which killed 400 people.

That was the birth of the Cuban Medical Brigade, one of the dreams of then Commander in Chief Fidel Castro and another sign of Cuba’s solidarity with the planet’s vulnerable nations.

Cuban doctors were in Haiti during the fateful Jan. 12, 2010 earthquake which killed tens of thousands, wounded hundreds of thousands, and forced 1.5 million citizens to live in tent camps for displaced people.

They were also present in October 2010 when cholera struck, a disease introduced by Nepalese soldiers from the United Nations Mission to Stabilize Haiti (MINUSTAH). The ensuing epidemic has so far claimed about 10,000 lives.

Evelio Betancourt, general coordinator of the Cuban Medical Brigade, told Prensa Latina that these two decades have meant a great deal to the two nations, adding that “history united us a little late in the sense of medical collaboration,” but the contributions made in the area of health are invaluable.

For Haitian Dr. Patrick Delci, who graduated as a physician in Cuba, the impact is something extraordinary, something palpable, “and one of the best things that collaboration has done is that while they are giving us their support, and leaving their homes, they are training us at the same time.”

So far, about 1,059 health professionals from Haiti have completed their studies in Cuba. After graduating, they join the more than 600 collaborators that render their services in Haiti’s ten departments, in 51 medical positions and 21 community hospitals.