In defense of Haiti: Haitians and Africans must stand together 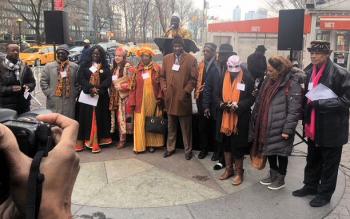 How much abuse and exploitation is one country supposed to accept?

Meanwhile, the American president on Jan. 11, heaped insults on Haiti, together with El Salvador and African countries – referring to them as "shithole countries” whose citizens – unlike Norwegians – are not worthy of immigration to the United States. Trump’s calumny fell on the eve of the earthquake’s eighth anniversary.

In earlier comments, reported in The New York Times in December, Trump said Haitians were even more undesirable because they “all have AIDS."

We as the African collective – continental Africans, African American sisters and brothers, other Caribbeans, South Americans, and Africans allover Diaspora – must stand up in Haiti’s defense.

Africans have always been inspired by Haitians, including by the memory of the great Toussaint Louverture. When Haitian President Jean-Bertrand Aristide organized Haiti’s 2004 bicentennial South Africa’s President Thabo Mbeki was the only head of state to defy a Washington-orchestrated international boycott of the ceremonies. A few months later, Mbeki gave Aristide sanctuary after he was ousted at Washington’s behest.

In the same spirit, it is essential that Haitians and Africans stand together today against Trump’s racism and aggression. On Feb. 15, the United Africans Congress, a 30-year-old coalition of African, African American and Caribbean organizations in New York City, organized a rally outside the United Nations at Dag Hammarskjold Plaza park (on 47th Street between 1st and 2nd Avenues) entitled #ProudAfricans Rally to Repudiate Donald Trump's racism. Roger Leduc of the 1804 Movement for All Immigrants (a coalition formed on Jan. 13 after Trump’s racist remarks) spoke at the demonstration of over 100 people, and several other Haitian sisters and brothers joined in solidarity.

Trump’s racism towards people of African descent is renowned – as demonstrated by his refusal to rent apartments to African Americans, his purchase of newspaper advertisements calling for the execution of the Central Park 5, and his insistence on their guilt long after they had been exonerated by DNA evidence and compensated $44 million by New York City. But the timing of Trump's slur represented a new low point.

In reality, Haiti has been demonized for centuries. It was not allowed to enjoy its independence after its great victory over Imperial France and Napoleon's Grand Army – the 1804 Haitian Revolution. It was the first and only time in history when enslaved Africans fought and defeated their so-called "masters" and established an independent state. This remarkable feat reverberated around the world, inspiring subjugated Africans in the United States and elsewhere. C.L.R. James's The Black Jacobins tells that story.

What was good for the formerly enslaved Africans wasn't good for imperialism, White supremacy, and colonialism. The example of the Haitian Revolution was never supposed to spread beyond the shores of the island. For their victory, Haiti’s people were punished with an economic embargo and the imposition of French sanctions. France didn't want the lessons of the Haitian Revolution to spread to Africa in the latter part of the 19th Century when it seized colonies there.

In the 20th Century, the U.S. took over meddling into Haiti's affairs, primarily through its 1915-1934 military occupation. Haiti's independence was usurped and sovereignty undermined. Subsequently, the U.S. acted as puppet master, supporting corrupt dictatorships like those of François “Papa Doc” and Jean-Claude “Baby Doc” Duvalier. Even after the Duvalier regime’s 1986 collapse, Washington supported neo-Duvalierist military juntas, which led to years of instability. Nominally under civilian rule today, Haiti's independence – not unlike most African countries – is only on paper. It has no control over its political and economic destiny. It's no coincidence that the countries referred to by Trump as "shitholes" provide raw materials to create wealth and prosperity in the industrialized countries – primarily, the United States and Europe.

That's why it was critical to loudly repudiate Trump's slur – which will legitimize more attacks and abuses against Africans and descendants of Africa, including Haitians – by mass demonstrations on Jan. 15, Jan. 19, and Feb. 15. But the demonstrations must continue. The organizations that built these actions – like the United African Congress and the 1804 Movement for All Refugees – should broaden and deepen their alliances. A united Diaspora translates into Black Empowerment.

Both the 1804 Movement for All Immigrants and the United African Congress are contemplating actions in May in Washington, DC around the anniversaries of the Haitian Flag on May 18 and African Liberation Day on May 25. Donald Trump, especially in the predominantly Black U.S. capitol, must hear African people collectively say: “No, we won't take your racist abuse!”

Milton Allimadi publishes The Black Star News and is an adjunct professor of African History at John Jay College.