Dominican Republic to construct fence along border with Haiti 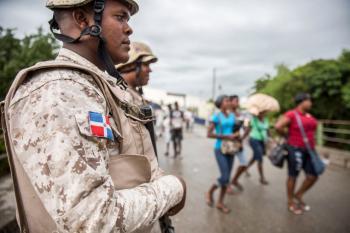 Haitians cross the border crossing in Dajabon, bordering city of Ouanaminthe in Haiti, in the northwest of Dominican Republic on 27 September, 2018. The Dominican Republic is set to start constructing fencing at its border with Haiti. (AFP via Getty Images)

The Dominican Republican will start construction on new fencing along the country’s border with Haiti this year in a bid to curb irregular migration and illicit trade.

Speaking before Congress on Saturday - the 177th anniversary of the Dominican Republic’s independence from Haiti - president Luis Abinader said his government would be taking action to end the “serious problems of illegal immigration, drug trafficking and the illicit trade” along the border.

The president gave a two-year timeline for the initiative, with the construction of fencing along the Dominican Republican’s 230-mile border with Haiti, with which it shares the Caribbean island of Hispaniola.

The barrier, on which construction is expected to begin later this year, is planned to include double-fencing in the “most conflictive” sections of the border, with facial recognition cameras, motion sensors and infrared systems also expected to be introduced.

It is still unclear how much the border fencing project will cost.

The government has said that many Haitians living in the country do not have official residency permits.

The plans for the border barrier come amid fresh turmoil in Haiti, where anti-government protests are expected to take place later today, according to several media reports.