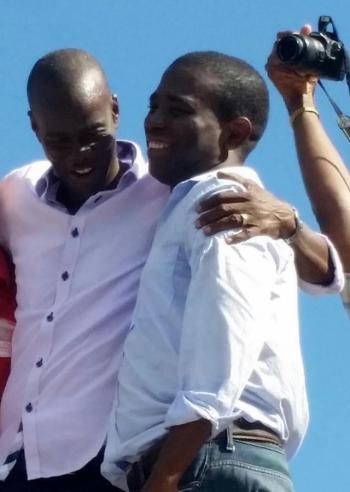 Former Haiti coup leader Guy Philippe, who has been wanted for more than a decade on drug charges in the United States, was arrested Thursday in Haiti and federal agents were bringing him to Miami.

Philippe, 48, was arrested after he left a Haitian radio station, local media reported. Police fired several shots during the 10 minutes it took to take him into custody outside Scoop FM in Petionville. Late Thursday, he was transferred to the custody of U.S. Drug Enforcement Administration agents.

The ex-rebel leader, charged with drug trafficking by the DEA under a 2005 sealed indictment, had just been elected to a six-year term in the Haitian parliament as a senator from the Grand’Anse area of Haiti. Earlier in the day, before the radio interview, he had picked up his legislative certificate.

The arrest came four days before newly elected lawmakers are set to be sworn in. As a senator, Philippe would have been entitled to immunity from arrest or prosecution during his term in office.

A Miami defense attorney who has been representing Philippe confirmed that he was being held by the Haitian National Police. “I have been informed that he’s in custody,” attorney Richard Dansoh told the Herald. “It appears the arrest is legitimate.”

He added that Philippe “has some real defenses,” possibly including sovereign immunity from prosecution.

Both the U.S. attorney’s office and the DEA in Miami declined to comment.

Philippe — who led a coup in 2004 that toppled then President Jean-Bertrand Aristide — will now face charges from 2005 in the United States.

Philippe has long proven elusive to both Haitian and U.S. authorities. Several attempts to arrest him over the years have failed, including a recent effort by Haiti National Police after he was accused of involvement in an attack on the police headquarters in the southern Haitian city of Les Cayes. At least six people were killed in the attack. An arrest warrant was issued for him after the attack.

And he has remained wanted in the United States for more than a decade on a Nov. 22, 2005, indictment charging him with conspiring to import cocaine into the U.S. and money laundering while he was a police official, according to law enforcement officials and others familiar with the case.

His group of handpicked police officers allegedly provided security for Colombian cocaine shipments as they were transferred to traffickers in Haiti for export to the United States, according to sources.

Philippe has always denied the U.S. allegations against him and said that it has no jurisdiction to arrest him.

“I am pleased to see that the Haitian National Police has carried out its legal responsibility to arrest those who have outstanding criminal warrants against them,” said Mark Schneider, a senior adviser with the International Crisis Group.

“In this case, it’s obviously a last-minute effort that prevents Guy Philippe from acquiring immunity from prosecution. One would expect that the pending cases against him both in Haiti and presumably in the United States would now take normal course through the criminal courts.”

U.S. Rep. Ileana Ros-Lehtinen, R-Fla., a member of the House Foreign Affairs Committee, immediately applauded the arrest, which she said should strengthen future security of the country.

“I am pleased that the Haitian National Police has captured Guy Philippe and I hope that we can get him extradited to the U.S. as soon as possible so that he can face alleged drug trafficking charges in our judicial system,” she said.

Philippe’s leadership in the 2004 coup d’état against Aristide led to the president’s ouster, and Human Rights Watch accused him of overseeing unlawful killings. In the aftermath, Philippe — along with other Haitian police officers, politicians and drug traffickers — became entangled in a U.S. crackdown on Haiti as a narcotics hub for Colombian cocaine.

Almost two dozen Haitian suspects, including the deposed president’s security guard, Oriel Jean, were convicted by federal prosecutors in Miami. After Jean’s conviction in 2005, he played a pivotal role as a cooperating witness, including the investigation of Aristide himself, though he was never charged. Jean was assassinated in 2015 after returning to Haiti.

But Philippe, described by some in law enforcement as a Ninja-like figure, always eluded attempts to catch him.

In the summer of 2007, a secret U.S. mission launched from the Guantánamo Bay Naval Base in Cuba to seize Philippe failed. There would be several other equally unsuccessful attempts.

Philippe’s arrest Thursday received mixed reactions in Haiti. While many fellow lawmakers criticized the arrest, others welcomed it.

“I am happy and I am sad,” said Pierre Esperance, a leading human rights activist in Haiti who had decried Philippe’s election and that of other lawmakers with criminal pasts. “I am happy to see that people like Guy Philippe, who are trying to get immunity to enter the parliament, won’t have a chance to. It’s a good small step in the battle against corruption and impunity in the country. But he is not alone. There are many others like him, bandits, criminals, drug traffickers, who have been elected deputies and senators.”

“Justice is sick in my country. The Haitian justice system knows well that Guy Philippe is a drug trafficker .. .and yet they made an electoral law protecting all criminals and delinquents,” he said. “They know that there is a report implicating him in the attack against the Les Cayes police station at the start of 2016. But neither the [Haitian electoral body] nor the Haitian justice system did anything and Guy Philippe was elected a senator. It’s an embarrassment for the institutions of the country, for the justice system that has no will to fight against corruption and impunity.”

In the aftermath of Philippe's arrest, the population in some communities of the Grand' Anse attacked police stations in Beaumont and Duchity, set fire to buildings and burned tires.