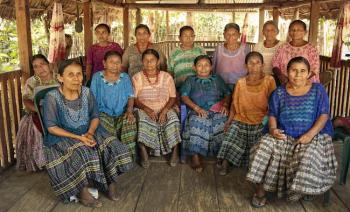 The Q’eqchi women of Sepur Zarco were forced into sex slavery during Guatemala's civil war. The trial against the perpetrators ended in the conviction of senior military officers last year. (UN Women/Ryan Brown)

Guatemala’s Congress stands poised to amend its National Reconciliation Law of 1996, which prohibits granting amnesty to those who had committed international crimes including genocide, torture, and crimes against humanity. The proposed legislation would terminate all ongoing proceedings against grave crimes committed during the country’s civil war, free all military officials and guerrilla leaders already convicted for these grave crimes, and bar all future investigations into such crimes. This legislation would violate international law, which establishes that grave violations of human rights must not be subject to amnesties, statutes of limitation, or other mechanisms that would hold perpetrators in impunity. It would also erase a decade of progress in efforts to clarify the truth about past crimes and hold those responsible accountable.

Another 14 retired military officials and former military commissioners are in preventive detention awaiting trial, including Lucas García, who was convicted last year but faces charges in another case. Several who were on trial or were awaiting trial, including former dictator Efraín Ríos Montt, whose conviction in 2013 was vacated, died before their trials concluded. Under the terms of the proposed legislation, all of these former officials would be freed within 24 hours of its promulgation.

In post-accord Guatemala, the continued power of the military and the weakness of legal institutions meant that judicial authorities were reticent to criminally investigate human rights crimes, although amnesty did not cover those who had committed grave crimes. Only a few high-profile cases, including the 1990 murder of anthropologist Myrna Mack and the 1998 murder of Bishop Juan Gerardi, ever made it to court.

In light of inaction by domestic courts, they also began to press their claims for truth and justice before regional and international courts. The Inter-American Commission for Human Rights has condemned the state of Guatemala in 27 cases, more than half of them involving human rights crimes related to the internal armed conflict, and has ordered authorities to investigate, prosecute and punish those responsible for these crimes.

As this external pressure was building, Guatemala’s legal institutions were changing. New leadership in the Attorney General’s Office asserted the need for independent investigations into crimes of the past. The UN-sponsored International Commission Against Impunity in Guatemala (CICIG) contributed to strengthening the autonomy of prosecutors and judges. Especially important was the creation of High Risk Tribunals, which provided judges with special training and additional protection to investigate complex criminal cases. Since their creation, the High Risk Tribunals have heard all human rights cases.

The early cases that came to trial focused primarily on foot soldiers and low-ranking military officials during the war. But impetus grew for the prosecution of senior military officials responsible for the design and implementation of a counterinsurgency strategy that resulted in massive human rights violations during the Guatemalan Civil War. Most notable was the 2013 trial against former dictator and retired army General Efraín Ríos Montt, who was found guilty of genocide and crimes against humanity against the Maya Ixil population and sentenced to 80 years in prison, and his military intelligence chief retired army General José Mauricio Rodríguez Sánchez, who was acquitted. Ten days after the sentencing, under intense pressure from business elites and sectors of the military, the Constitutional Court ruled, in a split decision, to partially suspend the proceedings, effectively vacating the verdict and forcing a retrial. Ríos Montt died in April 2018 in the midst of his retrial. Rodríguez Sánchez was acquitted for a second time in October 2018, though the court unanimously found that the Guatemalan Army committed genocide against the Maya Ixil.

The setback in the genocide case made the prosecution of human rights abusers seem like a pipe dream. The Association of Military Veterans of Guatemala (Avemilgua), formed in 1995 by senior retired military officials who opposed the peace accords, were rabid opponents of criminal prosecution of war crimes. They, and other key players, including the Foundation Against Terrorism, portrayed the trials as a political strategy of revenge orchestrated by former guerrillas who had lost on the battle field and were now carrying out war against the army in the courtroom. Paid ads and anonymous circulars portrayed Claudia Paz y Paz, the valiant Attorney General who brought forth the genocide case, as a guerrilla leader bent on revenge. They had a powerful ally in then-President Otto Pérez Molina, who had been a commanding officer in the Ixil region during the Ríos Montt government and had been implicated in human rights violations. More surprising was that moderate political notables, such as former vice-president Eduardo Stein, also questioned the genocide trialas a violation of the peace accords and as a threat to peace.

In this context, the counter-offensive began to bear fruit. Claudia Paz y Paz was forced out of her position in May 2014, six months early. There was tremendous fear that Pérez Molina’s new pick for the job, Thelma Aldana, would dismantle the Human Rights Section in the Attorney General’s Office that had been instrumental in moving conflict-era cases to trial. Intimidation campaigns targeted human rights defenders. Frivolous lawsuits and other legal actions were brought by the Foundation Against Terrorism and others against several of those who participated in the genocide trial, including lead prosecutor Orlando López, presiding judge Yassmín Barrios, and forensic anthropologist Fredy Peccerelli.

Just a few months after the anti-corruption protests, a new wave of prosecutions against those who had committed grave crimes during the civil war began. On January 6, 2016, 18 senior retired military officials were arrested in relation to two emblematic human rights crimes cases. Fourteen officials were arrested in relation to the mass forced disappearance case known by the acronym CREOMPAZ, the site of a former military base that was the center of military coordination and intelligence in Cobán, Alta Verapaz, during the height of the counterinsurgency war. Investigators have exhumed 565 human remains from the site, and at least 145 have been positively identified as victims of the armed conflict using DNA and other techniques. Four military members were arrestedfor the illegal detention, torture, and sexual violation of Emma Molina Theissen and the enforced disappearance of her 14-year-old brother Marco Antonio in 1981. The Molina Theissen case culminated in May 2018 with a conviction of the four senior officials charged in the case, marking a major victory for human rights groups.

And on February 1, 2016, the Sepur Zarco trial began, which resulted in the conviction of a senior retired military official and an ex-military commissioner for 120 and 240 years in prison, respectively, for the sexual violence and sexual and domestic enslavement of 15 Q’eqchi women at the Sepur Zarco military base between 1982 and 1985.

While the CREOMPAZ case remains tied up in appeals and other legal motions, other cases have moved forward. In November last year, a former Kaibil special forces soldier was convicted to 5,160 years in prison for the killing of 177 people in the Dos Erres massacre in 1982. Evidentiary hearings in another case against seven former military commissioners (one who has since died) accused of sexual violence against 20 Maya Achí women began on January 29, 2019. The Attorney General’s Office registers hundreds of other complaints of human rights violations still to be investigated and their perpetrators held to account.

These achievements and future progress in anti-impunity efforts for grave crimes cases are now under threat by those pushing to impose a general amnesty.

All of those convicted of grave crimes would be set free if the proposed amnesty legislation were adopted within a day of its promulgation. This includes a number of senior military officials who retain significant quotas of power in present-day Guatemala and who have been linked to organized crime:

Several military officials accused in grave crimes cases who have evaded arrest also stand to benefit from the proposed amnesty law. Two such officials, accused in the CREOMPAZ case, have reported close ties to Jimmy Morales and his party.

FCN-Nación: The Party of the Old Guard Military

Acommon denominator in many of these cases is the presence of the FCN-Nación, a right-wing political party founded in 2008 by retired senior military officials, many of whom are members of the Guatemalan Army Veterans Association (Avemilgua). In addition to actively opposing war crimes prosecutions, Avemilgua also staunchly opposed the creation of CICIG and has continued to be one of the Commission’s most vociferous critics. This became particularly evident when several of its affiliates became the target of investigations carried out by the Attorney General’s Office in coordination with the CICIG. In the context of FCN-Nación’s ongoing onslaughts against the CICIG, Avemilgua expressed its agreement with Jimmy Morales’ decision to shut down the CICIG and offered the president their “total support.”

The current president of Avemilgua is José Luis Quilo Ayuso, a retired brigadier general who studied at the School of the Americas (SOA). In 1983, he was based in El Quiché and was chief of the Defense Staff in 1994. According to Guatemalan press reports, Quilo Ayuso is a founding member of FCN-Nación and one of the retired military officials who financed Jimmy Morales’ 2015 electoral campaign. Though Morales repeatedly claimed that FCN-Nación no longer had ties to Avemilgua, Plaza Pública reported that nearly 40 percent of the party’s funding came from five retired military officials, including Edgar Ovalle Maldonado, Alsider Arias Rodríguez, Gregorio López González, and José Luis Quilo Ayuso.

Due to illicit campaign contributions during the 2015 electoral process, election authorities rescinded their recognition of FCN-Nación as a legal political party in 2017 and initiated the process of revoking its legal status last June. This decision was based on an investigation of the Attorney General’s Office and the CICIG made public in 2017. If FCN-Nación is barred from participating in elections, many of its representatives in Congress will not be able to run for reelection in June. But the decision is currently under appeal.

When the Guatemalan Congress was reviewing two committee reports on the proposed legislation to revise the National Reconciliation Law last month, Avemilgua Vice President, retired army General Marco Antonio González Taracena, was among those present in the gallery cheering on Congress to vote in favor of the proposal to impose a blanket amnesty for grave crimes. Taracena is, unsurprisingly, also a member of the military old guard. According to the National Security Archive, Taracena was in charge of “The Archive,” an espionage unit of the feared Presidential General Staff associated with massive human rights violations, during the military government of Mejía Víctores (1983-1986) and he served as Minister of Defense in 1995. Also present in the gallery was Nana Winters, the wife of Benedicto Lucas García. She blessed Fernando Linares Beltranena, the congressman who presented the proposed bill in 2017, before the congressional session got underway.

Congress will continue to debate the amnesty proposal over the coming weeks. Time will tell whether the military old guard has its way.

Jo-Marie Burt writes and teaches about human rights in Latin America. She is Associate Professor at the Schar School of Policy and Government at George Mason University and a Senior Fellow at the Washington Office on Latin America (WOLA). She was editor of NACLA between 1995 and 2000.

They research and report on war crimes trials in Guatemala for International Justice Monitor, a project of Open Society Justice Initiative.