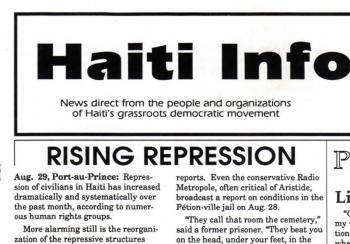 Working with peasant associations, popular organizations, neighborhood groups, unions, community radio members, members of religious communities, and with human rights, student, women’s and other groups, as well as with organizations in the alternative media movement, Haiti Info – a bulletin on paper – came out in English and, during a period of about two years, Spanish. (Near the end of the 1990s, some articles were also available as text only online.)

During the coup d’état/de facto period (1992-1994) the bulletin was produced clandestinely and sent via email to volunteers in Sweden and the U.S. who then printed and mailed it out. Later, it was copied and mailed from Haiti.

At its peak, Haiti Info had over 1,000 paying subscribers in Europe and the Americas, many of them individuals but also media outlets, human rights groups, unions and university libraries.

Haiti Info was only one of many activities of the Haitian Information Bureau, which closed its doors at the end of 1999. The bureau also had an extensive library, hosted and oriented journalists and grassroots fact-finding missions from abroad and, after the de facto period, produced materials in Haitian Creole and collaborated with other members of the alternative and community media movement in Haiti and in the region.