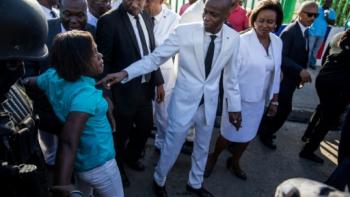 After searching the vehicle, police found an M4 rifle, four 9mm semi-automatic pistols including a Glock, a .380 caliber pistol and several magazines and rounds of ammunition. Among the vehicle’s five passengers were government employees and a known gang member, Johnny Metellus, who would later identify himself to police as vice delegate of Port-au-Prince, a position appointed by the president.

The men were immediately taken into custody. But even before the paperwork on their arrests could be filed with the courts, they were back on the streets, freed on the orders of an assistant government prosecutor after he personally showed up at the police station.

The prosecutor, Gérald Norgaisse, later defended his intervention on local radio. But Marie Yolene Gilles, the human-rights advocate who detailed the incident in a recent report — including Metellus’ past run-ins with Haiti National Police and U.N. peacekeepers — said the arrest and release underscore Haiti’s current precarious state. The United Nations, she said, is failing in its mission to reenforce justice and security, and the 15,735-member Haiti National Police force is being outgunned by heavily armed gangs and paramilitary units within its own ranks.

“They were here to reenforce justice, and the courts have been shut down for two months,” Gilles said, referring to a strike launched by the Port-au-Prince Bar Association. The Bar is demanding the recall of the Port-au-Prince public prosecutor and the arrest of the director of the Haiti National Police for the West region and other police officers, after they were accused of police brutality against the clerk of court and lawyers in October. “If the situation remains like this, we will end up worse than we were in 2004.”

That period, which brought a U.N. peacekeeping force to Haiti after the departure of then-President Jean-Bertrand Aristide, was marked by warring armed gangs and innocent bystanders caught in the crossfire. Two-thirds of Haiti’s police stations had either been burned or vandalized, and the force, once 6,500-strong, was less than 2,000.

“Back then it was primarily Cite Soleil and Bel-Air that were off limits. Today we have more no-go zones,” Gilles said naming several Port-au-Prince neighborhoods where today even the police can’t enter. ”If they want for the police to do their job, they have to encourage the police, because when the police arrests under one code and the courts release with another, you weaken the police and prevent them from doing their job.”

The concerns over the fragility of Haiti’s police force comes as the U.S. State Department last month warned American citizens to reconsider travel to Haiti and authorized non-essential diplomatic personnel and their families to leave. Amid the security concerns, the United Nations Mission for Justice Support in Haiti is preparing to reduce its presence even further, with the withdrawal this month of two police units. On Wednesday, the U.N. Security Council, which had set an Oct. 15, 2019, deadline for the mission to exit, will debate its future presence in Haiti.

In preparation for the discussions, U.N. Secretary General António Guterres earlier this month issued a report to the council on the situation in Haiti. He noted that inflation was at 14 percent in August, the domestic currency continues to depreciate against the U.S. dollar and calls intensify for a credible investigation into the use of funds from a Venezuela subsidized energy program, PetroCaribe. The campaign, which began on social media, has since evolved into a referendum on President Jovenel Moïse, as opposition groups call for his resignation while demanding an accounting of the funds.

Unlike human rights advocates and some politicians who have increasingly been expressing concerns about Haiti’s rising armed-gang problem, Gueterres sees the national police as a success story compared to all the other areas of governance.

The force has gone from 2,500 to nearly 16,000 officers in 14 years, and is present in all municipalities with 189 working police stations.

“At the end of the day the HNP has passed the test,” said Serge Therriault, police commissioner of the United Nations Mission for Justice Support. ”But there are some people who are somehow pushing the test too far in the sense that they don’t accept that it’s a professional police force that is able to do the work.”

Therriault said he recently watched videos of the police managing some of the recent protests and “whether it was in Les Cayes, or Cap-Haitien or Port-au-Prince, their application of the technique is what I had seen at the academy when we were training them in 2014, 2015.”

But it is not the national police’s ability to handle protests that has raised concern. It’s the fact that today, there are divisions within the national police, with some ignoring the orders of the chief and taking them directly from the palace. Officers are being burned alive and accused of staging killings in neighborhoods and controlling gangs, some of whom have exchanged gunfire with cops while themselves dressed as cops.

“They are destroying,” the national police, said former Police Chief Mario Andresol, who was tasked with rebuilding the force in 2004 after its was decimated by drug trafficking and politics.

Pierre Esperance, a human-rights advocate, agreed, saying that there is another element working inside the police, which does not fall under the control of its police chief but rather takes its orders from the executive branch.

He recalled a recent radio interview during which Police Chief Michel-Ange Gédéon revealed he was just as surprised as everyone else to see members of the presidential guard patrolling the streets of the capital during a Nov. 18 protest, flashing M60 machine guns and driving new camouflaged vehicles.

“When a director general of the police says that police officers have a gun in their hands that he doesn’t recognize and say these people were not supposed to be deployed in the streets, that is something grave,” Esperance said.

Gédéon did not respond to a request for an interview. But in a session before the Haitian Senate last week to address security concerns, he noted that despite a U.S. embargo on arms to Haiti, thousands of illegal weapons are in circulation in the country, including in the entourage of some of the very lawmakers questioning him and demanding that he do something about the proliferation of guns.

“Eighty percent of the senators are armed with automatic weapons,” he said. “Where did you buy them? Where did you find them? Let me know who sold it to you because it’s not just you who they sold it to, they’re selling it to several people.”

Recently, Esperance has taken his criticism of the government even further following a report by his National Network for the Defense of Human Rights on a Nov. 13 massacre that occurred in the La Saline neighborhood in Port-au-Prince. According to the report, 59 people were killed.

The armed gangs, the report said, “are well known by state and government authorities.”

Gilles’ Fondasyon Je Klere human rights organization also issued a similar report on La Saline. While it reported that between 15 and 25 people were killed, their bodies later thrown in pig pens and buried underneath garbage and the images shared widely on social media, it too noted that gangs affiliated with police and government representatives were behind the killings, rapes and forced disappearances.

“In La Saline, you had gangs fighting gangs and they all were heavily armed.... Meanwhile the police has been weakened as a result of the attitude of politicians and those in power. We are in a situation that is very complicated, and at a point of no return,” Gilles said. “If the country returns to where it was in 2004, we will be where Rwanda was.”