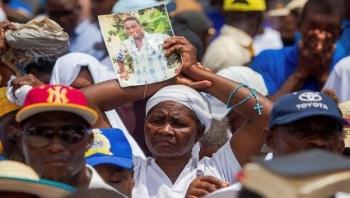 A woman holds the image of her murdered son in Port-au-Prince, Haiti. | Photo: Twitter/ @UrbCiudadZamora

Haitian teachers on Monday started a strike in rejection of the criminal delinquency and insecurity faced by school workers and students.

Until next Friday, teachers will demand justice for a teacher killed by gunmen in the Port-au-Prince suburb of Carrefour Feuilles while he was on his way to work. They threatened to extend the strike indefinitely if President Jovenel Moise does not commit to putting an end to the ongoing violence.

The catholic group 'Referans', which supports the strike, also called on the people to demand the release of the seven clergies who were kidnapped allegedly by the 400 Mawozo gang in Croix-des-Bouquets on April 11.

The strike is taking place as the country faces a wave of kidnappings, rapes, armed attacks, and assassinations.

Social insecurity has worsened with the escalating political crisis. Last week, Prime Minister Joseph Jouthe resigned, and the President was forced to replace him with Foreign Affairs Minister Claude Joseph.

In his first meeting at the head of the Cabinet, Joseph announced several measures to curb insecurity, such as finding kidnapped persons and starting prosecutions against perpetrators.

Between September 2020 and February 2021, Haiti recorded 73 attacks against children and women. These crimes were allegedly perpetrated by armed gangs. According to the Brigade for Minors Protection (BPM), at least 31 children were abducted last year.