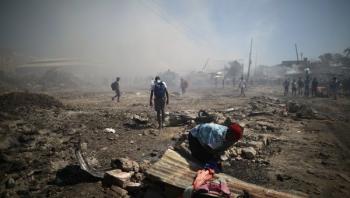 A vendor puts together metal sheets from her stand outside of the Marche Hyppolite (Hyppolite Market), also known as Marche en Fer (Iron Market), after a fire that affected part of the market and the surrounding stands in Port-au-Prince, Haiti, February 13, 2018. | Photo: Reuters

The historic Iron Market in Port-au-Prince, Haiti caught fire early on Tuesday morning, destroying most of its structure and several surrounding stands.

The market, known in French as Marche en Fer, is one of Haiti's biggest tourist attractions, and the fire represents a significant drawback for both merchants and the tourist industry.

The market was also partially ruined in a fire in 2008, after which it went under restoration but had to be rebuilt after the 7.0 magnitude 2010 earthquake, which caused a major humanitarian crisis and killed about 170,000 people on the island.

Authorities suspect the fire started in a trash can, but this hasn´t been confirmed. Witnesses say the fire alarm went off at 3 a.m. According to reports, the nearest fire station was called, but officials stated that they didn't have enough fuel to get to the market. Another station was called, but firefighters arrived too late. Firefighters and citizens joined forces to stop the fire, which raged on for hours, but only saved a small section of the market.

Many merchants and customers were still inside as the city was celebrating the national carnival.

Haitian President Jovenel Moise tweeted in French that he was “enormously sad” following the fire and shared his concern for "all those who lost their livelihoods.”

The market's merchants and employees lost their goods, and it's going to be a long time until they can set up their businesses again. Just a few of them are reported to have insurance.

The original structure for the Marche en Fer was built in Paris intended for a railway station for Cairo, but it ended up being bought by Haiti's then president Florvil Hyppolite when the agreement between France and Egypt broke. The pieces were imported to Haiti in and commissioned by Hyppolite in 1891.