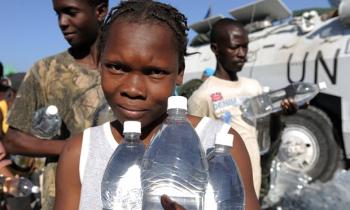 The year after Oxfam secretly forced out top officials for using prostitutes in Haiti, a UN agency fired one of its own senior figures after allegations of sexual misconduct with survivors of the 2010 earthquake.

The organisation ordered a rapid investigation in 2012 after internal whistleblowers reported that the man had brought young women from camps where homeless quake survivors lived to participate in sex parties for his friends.

“Some very brave women [within the organisation] wrote to headquarters saying this guy was grooming young beneficiaries, internally displaced people, for sex parties and one of them had become pregnant. He was effectively running a brothel in the house,” said a senior UN staffer who asked not to be named.

“The organisation actually responded well, took it incredibly seriously, sent in two teams of investigators … fired him, but ultimately the system doesn’t allow you to prosecute him. That means many of his friends still carry around the view that he was trashed by these people and there was no truth in the allegations.”

As the #MeToo movement exposes assault and harassment, the revelations from Haiti highlight concerns that structural flaws in how charities operate may have made those who work in the industry and those who it is meant to serve particularly vulnerable.

At a most basic level, regular moves from job to job that might be a red flag on the record of a new recruit in any other area are unremarkable in the aid sector. Short-term contracts are normal for international staff, who can bounce between countries and crises more than once in a year.

And aid agencies are wary of reporting problems to host governments or at home because they fear any hint of scandal could affect their ability to raise funds.

That has made it easier for people dismissed or forced out for committing abuse to find jobs elsewhere if the reasons for their departure have not been made public. Men forced out of Oxfam in Haiti have gone on to other senior jobs, the Times, which broke the original story, has reported.
“CVs that would raise questions elsewhere because of the frequency of moves are part of the culture,” said the UN official.

“The system is so big, and needful of staff, it’s quite easy for people to disappear and pop up elsewhere. It’s not considered weird if people move on. That’s what happens often with emergencies.” The yawning gap in wealth and access to resources between aid workers and those they are paid to help adds to the potential for exploitation.

“The [senior aid officials on the ground] don’t even lead the life of the locals, they are small gods. It’s about entitlement – they are entitled to do whatever they want,” said one former senior Oxfam employee.

And the dynamics of aid-work staffing add to the power imbalance. Many of Britain’s biggest aid charities are still dominated at the top by white men, an issue highlighted in 2013 by Oxfam’s own campaigns and policy director at the time, Ben Phillips.

“The first task is to recognise that it’s a problem,” he wrote then. “It’s not just that it’s a collective moral failure to be the change we want to be. It’s that it hampers the effectiveness of efforts against poverty.”

Yet even today the leadership of Oxfam in the UK is all white, and men outnumber women; the trustees are also dominated by white men and women. The perception of being an old boys’ club can make women, minorities and staff employed in countries like Haiti wary of reporting abuse for fear of being ignored or penalised.

“As things stand now, with someone working at country level who has cause to report a white male colleague – he or she would have to think twice about the power dynamics. Because you are looking at job security, and you don’t want to be seen creating trouble,” the former Oxfam staffer said. “You need the diversity from headquarters to the country level.”

The charity did commission a diversity report into some areas of its UK office in 2013, but then never reported back on any of the findings to employees, the staffer said.

The experience of those who reported abuse, including a former Oxfam country director who said she survived a rape attempt at headquarters in Oxford, did not encourage others. Lesley Agams, who had been highly rated at Oxfam, said she was handed a dismissal letter by the man who attacked her.

The UN whistleblowers in Haiti also suffered; although they were not forced out, they received anonymous threats while the investigation was going on, and their careers did not flourish after it finished.

“They had taken a very difficult step, because it is essentially saying goodbye to your career,” the former UN staffer said. “If you blow the whistle when you are out in the field, you may never be hired again – it makes you very vulnerable.”