How can the UN take on issues of justice when they can't hold themselves accountable? 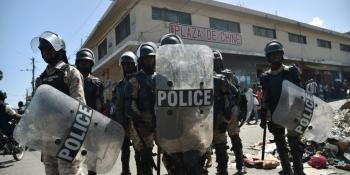 Janine Jackson: Donald Trump’s vituperative language was his own, as he lamented the presence of Haitians in the United States, including the 60,000 whose temporary protected status he was ending. But when CBS News described Haiti as “a shamble, made worse by a corrupt government,” or the Washington Post declared its “chronic instability rivals its profound poverty as a source of suffering,” they were likewise reflecting a particular story US elites tell about Haiti and its relationship to the US.

Journalists like Jonathan M. Katz at the Washington Post and Amy Wilentz at The Nation noted the galling absence of basic history from public conversation, the decades of repeated invasions, occupations and exploitation and a special animus towards a country where former slaves gained independence.

It’s been said that Haiti needs new narratives. The prevalent one, that says the country is inherently chaotic and corrupt, and the US and UN are just helpers doing their best, could be upended by simply steadier, contextualized reporting on events.

Our next guest has reported on Haiti for years now. Jake Johnston is a research associate at the Center for Economic and Policy Research and lead author for CEPR’s Haiti: Relief and Reconstruction Watch blog. He joins us know by phone from Washington, DC.

Welcome back to CounterSpin, Jake Johnston.

Jake Johnston: Thanks for having me.

Jackson: Let’s get right to the story that you’ve just reported for CEPR and The Intercept. What can you tell us about what happened last November 13 in the Port-au-Prince neighborhood Grand Ravine?

Johnston: So this was an anti-gang operation planned in conjunction with the local police department and United Nations mission in Haiti, called MINUJUSTH, which is composed of about 1,600 police officers, and just took over from a previous UN mission, which had been there for about 13 years, just a few months ago. And that was the ostensible purpose of this raid into Grand Ravine, was to target some gang activity; there had been some high levels of violence over the previous year. Now, what ended up happening is that this spilled over onto a school campus, and actually ended in the summary execution of innocent civilians.

Jackson: Well, when you say “spilled over,” the UN is saying, when it got to the killings on the campus, the UN involvement ended. What should we know about the UN narrative of what happened, versus what you heard from folks on the ground?

Johnston: First, it’s important to note that there is a lot that we still don’t know. I think that’s one of the really important things here. We’ve tried to put together sort of a timeline based on my own conversations with witnesses and victims, also local human rights organizations who’ve tried to investigate and document this. But we’re still stringing that together.

And I think that this is one of the really important things about getting to the bottom of the UN role; this is an institution that’s been in Haiti ostensibly to support the capacity of the Haitian police, to promote justice, and yet they have seemingly significant information about this operation, about what went wrong, and we’ve heard very little from them about it. And so, what the UN has said is this massacre that actually took place at this school was rogue police officers, it was outside of the scope of the operation.

The UN said that they responded to reports of shots fired. Two Haitian police officers were killed around this campus, and then [they] secured the perimeter. But according to the timeline that we’ve been able to put together, the assassinations and massacre that actually took place, took place after that. And so you have this scene where, according to the UN, their troops were circling the perimeter, but then Haitian police actually exacting revenge for their own officers being killed on an innocent population.

Jackson: It’s interesting, “outside the scope of the operation,” they say these civilian killings were, but the operation itself was… say again, it was aimed ostensibly at gang activity? And is this the main nature of the UN’s training of the Haitian police and the UN forces or missions in Haiti, this kind of police activity?

Johnston: Yeah, exactly. And I think, again, this goes back to when UN troops were sent into Haiti in 2004, after the coup d’état, ostensibly to restore stability and increase the Haitian police’s capacity, and what that’s meant in practice has been these raids, these operations in predominantly poor parts of Port-au-Prince, and there is a long history of these resulting in these sorts of civilian casualties; these are very densely populated areas, it is very difficult to maneuver within them. These are sort of a natural occurrence. These are expected. I think everyone sort of knows that they are going to happen. And yet, we continue to see this cycle where these raids are perpetuated, rather than getting to some of the root causes that allow this violence to thrive in the first place.

Jackson: Yeah, making the same mistakes again and again seems to be part of the storyline here. It’s important to know about the US and other countries’ role in creating and contributing to the hardship in present-day Haiti, but I think also to talk about what “assistance” or what “help” has looked like, is also important in terms of the present-day story. What can you tell us about the supposedly tankers-full of economic assistance, is the impression that you would get, that the US has delivered to Haiti over the past decades? What do we know about where that money goes, where it’s going? It seems as though we’re getting some more transparency, but what we see is not great.

Johnston: Yeah, that’s exactly right. First, when you look at what the international community, and the US specifically, has spent money on in Haiti, especially since the earthquake, but really going back further, for starters, the United Nations mission itself has consumed about $7 billion dollars of international investment over the last ten-plus years. If you look a little bit further down, in terms of aid programs, economic investments, reconstruction, this is tens of billions of dollars pledged to Haiti after the devastating earthquake of 2010.

I just looked at these numbers recently, and did a little update last week on where US money has gone, predominantly through USAID, since the earthquake. We’ve spent many billions of dollars in Haiti. What I found is that actually over 50 percent of that money went, first, to companies located inside the Beltway, here in DC and Virginia and in Maryland. Some money gets taken off the top, eventually a program gets launched in Haiti; but we see very little Haitian actual direct involvement in how that money is used, in formulating the plans. And so what you see is billions of dollars that have been spent in the name of Haiti, but very little going to what Haitians actually want.

Jackson: Well, I was reminded of a quote I saw in reading about this. In talking about the 2010 earthquake, author Mark Schuller noted that

with stories of devastation, appearing to many foreign observers as hell on earth with phrases like “state failure” often repeated, foreign media coverage also naturalized foreign control of the response.

So I think there’s some way that media play into the notion that Haiti is a place that needs to be run by outsiders, the US or the UN. It’s not to say that there aren’t all levels of crises going on, but it seems like the primary call or need coming from Haitians is support for local organizations.

Johnston: Yes, that’s exactly right. Local organizations, local businesses, local government. Again, this is what we were talking about before. This is repeating past mistakes, and we’ve seen this over and over and over again with donor involvement in Haiti’s affairs: bypassing the Haitian government, and then later saying, “Oh, well, there is no Haitian government to support, so we need to do our own thing.” But, of course, this is a cycle that keeps repeating itself, and it’s those policies that perpetuate it.

Jackson: Your most recent report is, of course, about this…. You want to say “anti-gang raid gone wrong,” except that it sounds as though it’s part of something that’s going wrong, bigger picture, itself. Your report is really all I’ve really seen about it, but imagining that we do see coverage of these events, which are after all from last November, going forward, I think we should be looking out for to what degree the UN owns its own role and its own impact. And I am sure I am not alone in not being able to forget the story of the introduction of cholera. I wonder if I could just pull you back to that for a second, because it seems like a template of the UN not being great at admitting wrongdoing.

Johnston: Yeah, that’s exactly right. Soon after the earthquake, these UN troops there—not related to the earthquake—introduced cholera. This has killed over 10,000, and sickened tens if not hundreds of thousands more. This has been a disastrous epidemic with huge consequences, and yet the UN failed to accept its own role until many years later, and still to this day, has failed to truly step up and provide the sort of resources necessary to counteract this epidemic, which continues to kill today.

And when you have this new UN mission, which was involved in the planning of this raid that we’re talking about…. You know, this is a mission that has been focused on justice, that is supposed to be focused on justice, but how can the UN have credibility to take on these issues of justice when they can’t hold themselves accountable for their own actions in Haiti? I think that’s why this case is so important moving forward. What role can the UN actually play in Haiti to promote justice, and how can they do that by supporting local populations, local organizations and local government to do so?

Jackson: I’ll just say, finally, we also remember in terms of environmental involvement, Bill Clinton doing this kind of mea culpa, about, “Yeah, our opening [Haiti] up to foreign markets and the way we ran things economically was a mistake. We messed that up.” But I just kind of wonder, and there were lots of plaudits about the frankness of the admission, but do those sorts of, “Yes, we’ve made mistakes in the past,” have they changed things, in terms of the US engagement in Haiti?

Johnston: Yeah, it’s an excellent point. We’ve seen this over and over again in Haiti where there’s some acknowledgement of these failures, of these faults in the past, but then sort of a blindness to their perpetuation in the future, right?

In Haiti, there was a devastating hurricane there last year, causing significant agricultural damage. What the populations were clamoring for, what was really needed, was support for local agriculture, for seeds, for people to be able to replant, and yet what we saw was this tremendous influx of imported rice, of imported goods. Now, that temporarily may have been necessary for a time, but over a longer period of time, that’s really undermining these local economies and these local agricultures, in very much the same way that Bill Clinton previously apologized for.

Jackson: We’ve been speaking with Jake Johnston. You can find his article on the Grand Ravine massacre on TheIntercept.com. Haiti: Relief and Reconstruction Watch is online at CEPR.net. Jake Johnston, thank you so much for joining us this week on CounterSpin.

Johnston: Thanks for having me.