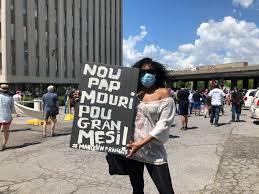 Daphnee Amedee, the daughter of Haitian immigrants, those who are working the difficult jobs in Quebec's health-care system want to live here, and should be given that opportunity. (Verity Stevenson/CBC)

About 1,000 people marched through the federal riding held by Prime Minister Justin Trudeau demanding commitment from federal and provincial governments to grant permanent resident status to those working on the front lines in the fight against COVID-19.

The Quebec government has the goal of hiring 10,000 new patient attendants by this fall for the care homes, known by their French acronym CHSLDs, with a new 12-week program. Most of the province's fatal cases of COVID-19 have been in CHSLDs and private seniors' residences.

It's the second time in two weeks that the group Debout pour la dignité has organized a march from Trudeau's riding office, located in Montreal's Villeray neighbourhood. After their first demonstration, Quebec Premier François Legault said he would ask Immigration Minister Simon Jolin-Barrette to look at the asylum claims of those working in CHSLDs on a case-by-case basis.

While Quebec has controls over parts of the immigration system such as economic migration, asylum applications are processed federally.

Wilner Cayo, the president of Debout pour la dignité, said the conditions under which many of the asylum seeker orderlies work amount to modern slavery.

"These women were good when it came to working for a miserable salary, but now that this work is going to be well-paid, the thank you they get is you can't be part of the program," Cayo said.

"It's shocking, it's inhuman."

Upon completing the training program, patient attendants would earn a full-time salary of $49,000 per year. But in private care homes, patient attendants make little more than minimum wage. Some have received a temporary raise of $4 per hour as part of bonuses the government has provided to help retain workers.

Applicants to the training program must be Canadian citizens and residents of Quebec.

The protesters chanted "Bring down injustice!" and "Stand up for dignity!" Some rode bikes at the front and others followed the marchers in cars.

Montreal police observed and controlled traffic along the route.

Cayo said he saw a link between the protests against anti-blackness and police violence in the United States and in Canada because most of the asylum seekers working in essential jobs in Quebec are black, many of them from Haiti.

"If you're here already and you're doing that job as a refugee claimant, you won't have access to a good job.... You'll be further marginalized, further pushed to poverty and precarious work," said Mostafa Henaway, a community organizer with the Immigrant Workers Centre who was at the protest.

Daphnee Amedee said the cause was important to her because her parents had migrated from Haiti before she was born, and many of her friends are health-care workers.

She carried a sign that said "Nou pap mouri pou gran mesi!" which she translated to "We will not die for your thank you and we will not die in vain," in Haitian Creole.

"They want to live here. They want to stay here permanently and I do believe that they should, based on what they've done for us, they should be allowed to have at least that," Amedee said.

Also in attendance were representatives from the opposition Parti Québécois and Québec Solidaire parties, as well as independent MNA Catherine Fournier, who tabled a motion in Quebec's National Assembly to recognize the contribution of "hundreds of asylum seekers, mostly of Haitian origin," working in CHSLDs.