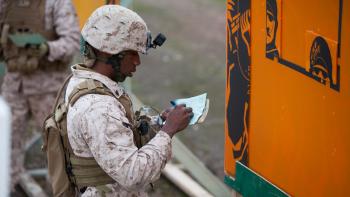 Jacques Yves Sebastien Duroseau, 34, was convicted in December 2020 on charges of conspiracy to illegally export and smuggle firearms and controlled equipment from the United States to Haiti as well as transporting firearms without a license to the Haitian army, according to a U.S. Attorney’s Office statement.

In April 2019, Duroseau began making plans to return to Haiti, contacting a person in the country whose name was not listed in court documents about his plan, according to court documents.

Duroseau, a Marine firearms instructor, got a friend, identified as “TH,” who was a sergeant in the Marine Corps’ Individual Ready Reserve to alter paperwork claiming he was a Marine colonel on orders to Port-au-Prince, Haiti.

He faces sentencing in federal court on March 1, 2021.

The duo arrived at the airport on that date. Duroseau was in civilian attire but his IRR sergeant friend was dressed in Marine utilities with the rank of captain. They brought along three suitcases and three containers, two of which were filled with firearms and a third full of ammunition.

TH played the role of Duroseau’s subordinate, taking notes on the contents of the containers. The pair filled out paperwork with the airline to transport the items. But neither of them had gotten approved export documents for the weapons, body armor and rifle scopes they brought with them.

Officials inspected Duroseau’ s luggage when he landed in Haiti.

The sergeant freely admitted to investigators that he had traveled to his native Haiti to help Haitian people, “defeat the thugs that have been creating a little bit of part of the instability in Haiti.”

TH told investigators that Duroseau planned to move to Haiti, work with its police force and eventually run for president. He said since he was going to live in Haiti he wanted to take his firearms with him.

Naval Criminal Investigative Services identified electronic traces showing Duroseau as the purchaser of the weapons, some as recently as October 2019, others from previous years.

TH was not listed as having been charged of any crime for his alleged role in the case.

Duroseau was detained and charged upon his return to the United States. He was indicted in January 2020 and faced a three-day trial in early December 2020 in which a jury found him guilty on five of six counts, all related to the transport and smuggling of firearms out of the country.

The sergeant was found not guilty of impersonating an officer.