Mining as a development strategy: An economically suicidal project 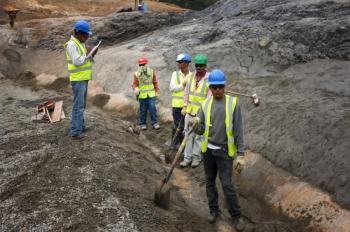 Workers build a damn in 2012 to catch acid runoff near the Dominican Republic’s Pueblo Viejo site. This site was unsuccessfully mined by the Dominican government and their mining efforts caused major environmental contamination to nearby lakes and rivers. Credit: Ben Depp

The international community’s institutions and the ruling classes of countries impoverished by colonialism see the exploitation of natural resources as a model, a strategy, and a means of achieving development, that is to say, economic growth.

In political parties’ programs, in heads of state’s general policy statements, in the Haitian president’s speeches (like that at the mini-summit between the U.S. and Caribbean nations on Fri., Mar. 22, 2019 in Mar-a- Lago), the exploitation of the subsoil’s natural resources is perceived as the only means or the most effective strategy to lift the country out of its socio-economic and political slump.

This article looks at the experience of exploiting natural resources as a development strategy for the peoples of Africa, Latin America, the Caribbean, and most particularly Haiti and the Dominican Republic. We aim to counter the official discourse on the issue and warn Haitian decision-makers and especially the people, the communities targeted by natural resource extraction, of the potentially irreparable harm mining can wreak on a country’s economy and environment.

Mining: a Discourse of Development

From the outset, we must emphasize that the exploitation of natural resources as a development strategy does not respond to the real needs of people, particularly in Haiti, classified as “backward” and “underdeveloped.” Mining meets the needs of Western countries, the demand for raw materials by certain metropolitan centers over the past 500 years since the conquest and colonization of America, Africa and Asia, which marked the beginning of the structuring of the capitalist system’s world economy.

Extractivism as a model of development has been proposed and imposed by international institutions as a mode of accumulation, that is to say, a mechanism of pillage and appropriation of the colonial and neo-colonial type. It destroys all forms of life in a society, the economy, culture, and environment of the colonized people. In this sense, Haitian governments, under the international community’s influence, have reproduced a colonial conduct without a colonial administration in spite of the catastrophic results on the Haitian population economically, socio-politically, and environmentally of this vision of society and these policies.

Reynolds Metals operated this bauxite mine in Mirogoâne for 30 years, ravaging the area. As Fred Doura has shown, other than a few salaries, it contributed almost nothing to Haiti’s economy despite the wealth it extracted.

Viewing “development” as an economic factor without regard for culture or the irreparable impacts of this “economic growth” on the environment is a backward economic view, which is intended only to attract foreign investment without taking into account the other fundamental parameters of the life of living beings. Yet, despite the great theoretical advances on the question of development and the painful experiences of applying this vision, in Haiti, in almost all the programs of the so-called “traditional or modern” political parties, in the official speeches of leaders, exploitation of the sub-soil’s resources is considered a strategic axis of economic growth or development.

Multinational corporations estimate that there are more than $20 billion of gold in Haiti’s subsoil. This economic evaluation does not take into account the environmental cost, nor that between 60%  to 70% is the investment cost. According to the law on the investment, the state has 3% to 5% of the $20 billion during the exploitation period.

Fred Doura’s research on copper and bauxite mining by the companies SEDREN and Reynolds, and Guy Pierre’s work on the mining experience testify to mining’s extrovert nature, its weak contribution to the national economy, and the socio-economic and environmental impacts it has on the country. So, in reality, Haiti’s presidents fight only for crumbs because of mining’s extractive nature and the Haitian state’s incapacity to make a counter-evaluation of resources or to renegotiate a deal with the companies.

In short, mining has indeed helped Western countries to achieve some economic growth and capitalists to maximize their profits, but it has not helped the countries, the communities, from which these resources are extracted. The argument that the country is overflowing with resources that can help it develop is an ill-calculated discourse that does not take into account the logic in which mining is inserted, nor its potential irreparable impacts on the environment and any form of life in Haiti. It only helps the extracting multinationals. Mining can help only to disrupt and destroy Haiti’s economy.

The official discourse on mining is that it can contribute to economic growth, that is to say in the Gross Domestic Product (GDP) or the development of the countries from which the resources are extracted. Yet, according to experience, mining disintegrates the economic growth of all economic sectors and even destroys the economies of the countries that experience it as suppliers of the raw materials. These countries have become heavily indebted by the destruction of other sectors such as tourism and agriculture through the exploitation of their natural resources.

Benoit Joachim, in his research on “the roots of our underdevelopment,” found that it lies in the mining that began in 1492 and continues to today. So, Haiti’s poverty is the result or the consequence of the policies and extractive projects applied by Haiti’s leaders.

Many other studies testify to this state of affairs, but our politicians and political parties  are deaf to the cries and blind to the scars from the painful experiences of other peoples and even of our own history on the issue of mining. Instead, they exalt mining as a strategic sector of Haiti’s growth and development, while at the same time promoting agriculture and tourism. But experience and research has shown that natural resource exploitation is in constant contradiction with other sectors or economic activities such as agriculture and tourism.

Workers build a damn in 2012 to catch acid runoff near the Dominican Republic’s Pueblo Viejo site. This site was unsuccessfully mined by the Dominican government and their mining efforts caused major environmental contamination to nearby lakes and rivers. Credit: Ben Depp

In fact, the mining industry reduces agricultural space, agricultural production, and the agricultural sector’s income, increasing unemployment in the supplier countries. In all cases, countries end up indebted to the IMF and World Bank.

In addition, mining causes irreparable harm to flora and fauna, health, water, air, agriculture, and destroys the tourism sector. No destroyed environment will attract tourists because they will never risk coming to a country where they are likely to be poisoned by cyanide. No tourist will take the risk of buying and consuming agricultural products from communities targeted by mining because s/he knows that there is no way to avoid mining’s poisoning of air and water. As an example, the products of the Cotùi community in the Dominican Republic are not well received on the market.

Thus, mining is suicidal for an economy, and worse, for a society, because its extractive consequences impact other spheres of the economy.

Exploitation of natural resources as a strategy and means to achieve economic growth and/or development is being challenged around the world by the dominated, marginalized class of the dominated countries, because of their experience. There is no country that has followed the path of mining to the promised land, economic growth, and “development”. All territories, that is to say, all peoples who experience mining as a model and/or development strategy have become increasingly poor, with a disjointed economy, and an indebted state.

ALL PEOPLES WITH MINING AS A DEVELOPMENT STRATEGY HAVE BECOME INCREASINGLY POOR, WITH A DISJOINTED ECONOMY, AND AN INDEBTED STATE

So, the official propagandist rhetoric that advocates natural resource extraction, especially mining a nation’s sub-soil, as a strategy and way out of the “cycle of poverty”, is a speech that legitimizes the genocide of the Tainos, who inhabited Haiti before Spanish and French colonization, looting, destruction of the environment and the pauperization of the Haitian peasants of Mémé and Paillant by the companies SEDREN and Reynolds mining.

It is also a speech that legitimizes the violation of environmental rights, the right to life, and criminalizes our compatriots in Africa, Latin America, and the Caribbean who are fighting against this genocidal project.

In this sense, it is the responsibility of Haitians to fight against the mining project as a model of development and establish a dynamic society where all Haitians on the country’s soil can live in harmony with their environment.

Written in Port-au-Prince, Mar. 23, 2019. Peterson Dérolus is an anti-mining activist.