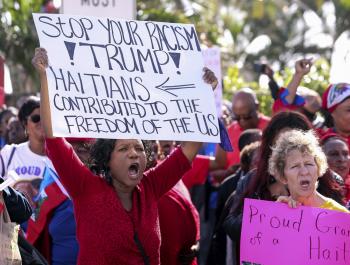 On Jan. 24, the venerable National Association for the Advancement of Colored People (NAACP) filed a 37-page complaint against U.S. Department of Homeland Security (DHS) heads Elaine Duke and Kirstjen Nielsen for their “intent to discriminate on the basis of race and/or ethnicity” by ending Temporary Protected Status (TPS) to about 60,000 Haitians.

The NAACP Legal Defense and Educational Fund brought the suit in U.S. District Court for the District of Maryland in an effort to stop DHS’s November 2017 decision to rescind Haitians’ TPS, which officially ends on Jul. 22, 2019.

“DHS’s actions are consistent with the Trump Administration’s... larger, racialized goals concerning immigration,” the complaint says. “President Trump has long made clear his antipathy towards Latin American and Black immigrants, and his preference for white immigrants.”

The complaint cites the Jan. 11 White House meeting during which witnesses say President Donald Trump derided Haiti, El Salvador, and African nations as “shithole countries” and asked: “Why do we need more Haitians?”

It also cites Trump’s alleged remark at an earlier meeting that Haitians “all have AIDS.”

Founded in 1909, the NAACP is the oldest and largest U.S. grassroots-based civil rights organization, with over half a million members and supporters. The organization campaigned vigorously against the 19-year U.S. Marine military occupation of Haiti from 1915 to 1934 and has spearheaded many legal campaigns against racial discrimination, producing iconic leaders like W.E.B. DuBois, Medgar Evers, Martin Luther King, Jr., Rosa Parks, and many others.

The complaint points out that current Trump Chief of Staff John Kelly, when he headed DHS in early 2017, along with other “DHS officials sought crime data on Haitians with TPS” (as revealed in an Associated Press exposé) and “information on how many Haitian nationals were receiving public benefits in the United States.”

“The Administration’s efforts to gather this data on Haitian TPS recipients trades on false anti-Black stereotypes about criminality and exploitation of public benefits, and suggests the effort to manufacture a public safety rationale for the planned rescission,” the lawsuit charges.

The complaint details the broad political support among elected officials, legal organizations, and humanitarian and human rights groups for renewing Haitians’ TPS for another 18 months. It also argues that DHS made “an egregious departure from the TPS statute’s requirements” and “appeared to offer pretextual reasons for rescinding Haiti’s TPS,” while “the evidence of the Administration’s overt bias against immigrants of color, and Haitians in particular, strongly supports an inference that DHS’s decision was motivated by racial discrimination.”