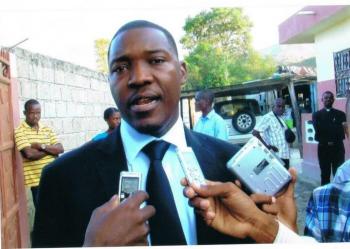 Haiti’s national budget, already more than two months overdue for implementation, is generating controversy among parliamentarians who must approve the document.

Mirebalais MP Abel Descollines threatened to vote against the Finance Law presented by the Executive on Dec. 10 and asked the government to clarify the budget being implemented.

“Parliamentarians who are not close to the government have great difficulties to benefit from the outlay of funds allocated to their constituencies,” lamented Descollines.

He regretted that funds for the different constituencies, some 2.5 million gourdes ($33,783) “have not yet been disbursed.”

The lawmaker announced his intention to form a “parliamentary guerrilla group” to veto the bill, particularly in the lower house.

Although the fiscal year began Oct. 1, the 2018-2019 budget final draft was only delivered to parliament on Dec. 10. According to Ronald Décembre, the Minister of Economy and Finance, it is predominantly for social needs.

Health and Education portfolios will benefit from increases of 26% and 63% respectively, compared to the last fiscal year.

The Ministry of Labor and Social Security’s income also grew by 10%, while the amount granted to Parliament, strongly criticized in 2017 when its allotment exceeded the one billion gourdes ($14.706 million) allocated to public health, was reduced.