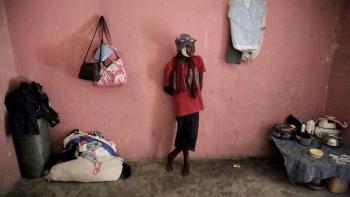 Because of his advanced Burkitt’s lymphoma, Djooly Jeune, then 17, was kicked out of school. His 14-year-old sister was as well, his mom said, because the director feared he was contagious. He’s surrounded by his family’s meager possessions. By Jose A. Iglesias

Djooly Jeune, the Haiti teen who is battling Burkitt’s lymphoma in a poverty-stricken country where there are few treatment options for cancer, began a new round of chemotherapy Tuesday just as two of the country’s leading cancer treatment programs have agreed to collaborate on future pediatric cases.

“We are working on [an agreement] with Nos Petits Frères et Sœurs to take care of Djooly and the many Djoolys who are coming our way,” said Loune Viaud, executive director of Zanmi Lasante, the Haitian medical nonprofit that runs the University Hospital of Mirebalais, where Jeune has been hospitalized since Dec. 2.

Nos Petits Frères et Sœurs, French for “Our Little Brothers and Sisters,” is the nonprofit that runs St. Damien Pediatric Hospital in metropolitan Port-au-Prince, where Haiti’s only childhood cancer program is housed.

Diagnosed in May with advanced cancer, Jeune, now 18, spent eight months struggling to get treatment in a broken Haitian healthcare system with poorly trained doctors, limited chemotherapy options and treatment that is many hours away on a public bus.

When his tumor failed to respond to chemo and began growing again aggressively in November, none of the medical professionals Jeune saw, including nurses at a wound care center in Port-au-Prince where he went at least twice a week to change his bandages, noticed that the large mass had ruptured and had become infected.

Jeune’s plight was chronicled last month in the Miami Herald’s Cancer in Haiti series, along with that of Djonsly Alcin, another Haitian teen who was fortunate enough to come to South Florida, where he’s being treated for free by Baptist Health South Florida for an advanced brain tumor. The project was produced in partnership with thePulitzer Center for Crisis Reporting.

In a country where there are only 10 pediatric hospital beds devoted to cancer — and those who have the disease often are shunned — Jeune’s case had come to illustrate how the poor and powerless pay the price in Haiti for the reluctance of the country’s leaders to invest in their medical system.

“There are many Djoolys who are dying and we don’t even know them,” said Dr. Pascale Yola Gassant, Haiti’s leading pediatric oncologist who in 2004 founded the childhood cancer program at St. Damien.

After initially turning down Jeune’s case because at 17 he was too old for St. Damien — the hospital treats children up to age 14 — Gassant decided to not only lend her expertise to his care at the University Hospital of Mirebalais, but help the teaching hospital better equip its oncology center to treat similar cases among Haiti’s 11 million inhabitants.

“It’s the debut of a collaboration that will allow us to start to care for those who are between the ages of 15 and 21 with cancer,” Gassant said.

She noted that with 35 percent or 3.85 million of Haiti’s population under the age of 15, the country can expect to see hundreds of new childhood cancer cases annually.

But with only a limited number of pediatric cancer beds for the whole country, and an age limitation at St. Damien, many of these children, especially those between the ages of 15 and 21, will have no place to go.

“If they go to Mirebalais, which isn’t prepared for them, they get treated as adults. But adult treatment plans do not work for children,” Gassant said.

Last week after making the two-hour trek to Mirebalais to visit Jeune, Gassant worked with the hospital’s staff on how to properly care for him and mix the chemotherapy treatment she uses for Burkitt’s. She returned the next day to perform several tests to see if Jeune’s cancer had spread. It appears that it has not, and remains localized on the left side of his face, she said.

On Tuesday, after spending two weeks on a protein and nutrition-filled diet to strengthen him, Jeune was moved to an isolated area of the hospital to begin the new round of chemotherapy. The treatment was administered by two Mirebalais doctors under Gassant’s supervision, and he responded well, the hospital said. He will need to remain hospitalized for the rest of December and possibly into January, Gassant said, to manage any possible complications.

Jeune’s ordeal has rallied many to his cause. Scores have given to a GoFundme, launched by two South Florida health professionals who met Jeune during a mission trip to Haiti earlier this year. Also a U.S. pharmaceutical company, contacted by Zanmi Lasante after a similar request was turned down by a hospital, donated a cancer drug that was hand-delivered to Haiti.

In Haiti, two entrepreneurs have also come to his aid. One provided money to purchase other cancer drugs not readily available at the hospital, and another has been helping Jeune’s mother, Angena Altidor, take care of three younger children by donating groceries. Altidor, an unemployed widow who has been unable to send her children to school while caring for Jeune, said she is grateful for all the support.

Gassant decided to help after becoming alarmed when she read on Twitter that Jeune was preparing to undergo surgery to “debulk” the tumor. Surgery and radiation used to be treatment options for Burkitt’s lymphoma in the U.S. But in the 1980s, they were replaced with aggressive chemo and other treatments.

At the time doctors made the decision to operate, Jeune’s tumor was growing aggressively, and the swelling prevented him from swallowing. He was malnourished, could barely walk and had lost a lot of weight. Meanwhile, efforts to get pro-bono cancer care for him in the United States and to get a hospital to fund a $40,000 second-line chemo treatment, were proving unsuccessful.

Refusing to accept that they had no other option but to send Jeune home to die, Viaud, with the Haitian medical nonprofit, and Dr. Maxi Raymonville, the Mirebalais executive director of the hospital, convened a meeting. They invited Jeune and his mother. Also in attendance were Dr. Joseph Bernard Jr., from Innovating Health International, another medical nonprofit involved in cancer care in Haiti; and Dr. Roger Mixter, a Wisconsin plastic surgeon who volunteers at Mirebalais and has been Jeune’s biggest advocate after being asked to consult on his case earlier this year.

It was decided that Innovating Health would order the chemo from India, using the GoFundme donations., and surgery, followed by chemotherapy and possibly radiation in the neighboring Dominican Republic, were the teen’s best options.

Surgery, however, never came. Jeune’s ruptured tumor required immediate antibiotics to prevent him from dying from septic shock. Gassant, seeing the Dec. 4 tweet, balked and offered her Burkitt’s lymphoma protocol to the hospital, which was built after Haiti’s January 2010 earthquake by Boston-based Partners In Health.

Though the doctors debated which chemo protocol would be most effective given how advanced Jeune’s disease is, Gassant believes that Haiti lacks the structure to manage the complications that come with some of the stronger cancer drugs. She isn’t promising any “spectacular results” with Jeune, whose prognosis remains guarded.

“This is a patient who has already spent more than nine months with this disease,” Gassant said of the teen, who will be administered chemo every 21 days in the hospital. “We are going to try and give him chemotherapy. Even if we don’t end up saving him, we will at least improve the quality of his life.”

Last week, as Raymonville visited St. Damien with some of his oncology staff, Gassant gave a tour of the hospital where the names of young cancer patients are taped to the wall above their cribs, and a waiting room doubles as the outpatient chemotherapy treatment room. Downstairs, chemo drugs are kept under lock and key, and some in quarantine after the health ministry blocked them from being used because the donated medication came with a black mark on the back of the sealed boxes.

“In cancer care, you cannot work by yourself,” Gassant stressed. “It’s team work. You have the doctor, nurse, social worker; there is a psychologist.”

Trained as a pediatrician in Cuba, Gassant, who is Haitian, studied pediatric oncology in Guatemala. The Guatemala program was financed by St. Jude Children’s Research Hospital in Memphis, Tennessee, which after Haiti’s earthquake decided to support the fledgling St. Damien program. St. Jude helps with staff and cancer drugs, and pays for radiation treatments in the neighboring Dominican Republic for some young patients..

Mixter, the plastic surgeon who is continuing to see if Jeune can get pro-bono care at a U.S. hospital, sees the unprecedented partnership taking shape between Gassant and the University of Hospital of Mirebalais as a positive step.

“Haitians need to figure it out and they are,” said Mixter, who is training Haiti’s next generation of plastic surgeons at the teaching hospital. “Now the egos need to be professional and help nurture the collaboration, which seems like it is happening.”