A review of Irwin Stotzky’s “Send them back” 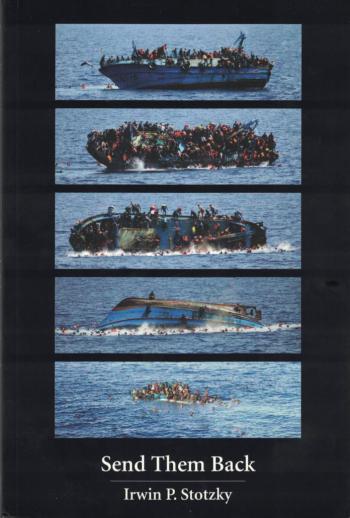 The new book “Send Them Back” details the legal struggles in the United States on behalf of Haitian refugees.

“Send Them Back” comes out as President Donald Trump’s administration is declaring all-out war on immigrants, tearing children from their parents, shooting and tear-gassing people still on foreign soil, and persecuting brown and black people across the U.S..

Forty years ago, the war was against Haitians. Stotzky joined with Ira Kurzban and other immigration lawyers to defend Haitian refugees, who were then the principal target of racist, arbitrary, and hypocritical U.S. immigration authorities. Stotzky takes the reader on a journey through the trail-blazing legal battles that he and the other lawyers waged to defend the “boat-people,” winning seminal victories which today form a legal bulwark against the Trump assault.

The struggle ranged from the U.S. military base at Guantanamo Bay, Cuba, where Haitian refugees where kept in a veritable concentration camp, to the Krome Detention Center in Miami, to courtrooms in Atlanta, New York, and Washington, DC.

“No other group of refugees has ever been treated in such an invidiously discriminatory manner by the United States government as the Haitian refugees,” he writes. “The most prominent cases… have fundamentally changed the law and indirectly the United States policy toward Haitian and other similarly situated refugees.”

Stotzky concentrates mostly on the refugee litigation, but, as a board member of the Institute for Justice and Democracy in Haiti (IJDH),  he also devotes a chapter to the now in-limbo legal suit against the United Nations for introducing cholera into Haiti. He dissects the IJDH’s legal case against United Nations immunity, as well as the UN’s half-apologywhen Secretary General Ban Ki-moon retired in December 2016, followed by a series of UN and U.S. promises, which have all been broken, so far.

He also touches briefly on the situation of 60,000 Haitian Temporary Protected Status (TPS) holders. “Unfortunately,” he concludes, “the United States government is violating the rights of Haitian asylum seekers in another historically repetitive and cruel way.”

The final chapter of “Send Them Back” is entitled “An Alternative Vision,” where Professor Stotzky lays out his recommendations and prescriptions for how to address the many problems he raises. But none of it will be easy, he warns.

“The only hope Haiti has for achieving a valid and viable democracy is the creation of a new socioeconomic arrangement, which will be difficult to initiate, and even harder to maintain,” he writes.

But despite Haiti’s difficult road ahead, Stotzky notes that the legal battles continue, with four TPS lawsuits underway across the U.S..

“We will once again test the legality of another unconscionable and discriminatory act against Haitians,” he concludes.