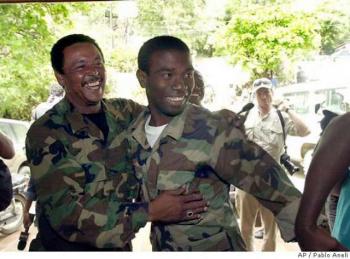 UPDATE 1/6/2017: The federal indictment against Philippe has been unsealed. It is available here.

Guy Philippe, a paramilitary coup leader and DEA most-wanted fugitive who was elected to Haiti’s Senate late last year, was arrested on Thursday, just days before he would have been sworn into office and obtained immunity. Philippe has been wanted under a sealed drug indictment in the United States for years, but previous attempts at arresting him failed. Last year, the DEA confirmed to me that they maintained “apprehension authority” for Philippe, but would not confirm if any active efforts were underway to do so. He will now be extradited to the United States to face charges, though no indictment has been unsealed as of Thursday night.

Although Philippe has spent most of the past decade in Haiti’s rural Grand Anse department where he maintains strict control, he became more active in the country’s politics over the past year as he campaigned for senator. President-elect Jovenel Moise, from the PHTK party, openly campaigned with Philippe and his party allied with Philippe’s early in 2016. A PHTK adviser, Renald Luberice, tweeted shortly after the arrest that it was “illegal and arbitrary.” Fires and roadblocks almost immediately went up in Phillipe’s hometown and surrounding areas, according to local news reports.

After last year’s elections were scrapped due to fraud and Michel Martelly left office without an elected successor, Philippe became one of the most outspoken critics of the new interim government that took over. In February 2016, he threatened "civil war" if elections were not held by that April. In May, with elections still yet to occur, Philippe was alleged to be the ringleader of an armed raid on a police station in Les Cayes, in southern Haiti. Elections were eventually held in November 2016 and Philippe won a seat in the Senate, representing the Grand Anse department. Parties allied with PHTK and Philippe will make up the majority of the incoming parliament to be sworn in next week.

Over the summer, a source close to the Haitian government, who requested anonymity, suggested that the US would move against Philippe before he became Senator to “send a message” to the incoming parliament, which includes other figures accused of corruption and drug trafficking. Now that appears to have happened, but not before he helped his allies secure an electoral victory this past November.

Philippe, however, is widely believed to have been involved in murders, atrocities and other human rights abuses over the past 20 years, while serving a political agenda backed by Haiti’s elite and their international allies. He received training by the US military while a cadet in Ecuador in the early 90s before returning to Haiti in 1995. However former president Jean Bertrand Aristide had disbanded the military that same year, due its long history of involvement in atrocities, human rights abuses and coup d’etats. Philippe, who has, in his own words, “always dreamed of becoming a soldier,” instead became police chief in the Delmas neighborhood of Haiti’s capital Port-au-Prince. During his tenure, according to Human Rights Watch, “dozens of suspected gang members were summarily executed, mainly by police under the command of Inspector Berthony Bazile, Philippe’s deputy.”

In 2000, Philippe was accused of orchestrating an attempted coup d’etat against president Rene Preval, but before he could be apprehended he fled to the neighboring Dominican Republic. At first, the Dominican authorities told the Haitian government they would help arrest the fugitive police officer and his allies. According to a former Haitian government official, who requested anonymity, Dominican police apprehended Philippe and were set to hand him over to Haitian authorities, but later reversed themselves. Philippe would remain free until this Thursday.

From his safe-haven in the Dominican Republic, Philippe was accused of leading attacks on Haitian police stations and supporters of president Aristide, who had just been elected for a second time. In an interview with author Peter Hallward, Philippe denied his involvement but added, “don’t worry, when the time is right people will learn what really happened.” At the time, the Aristide administration was under attack both internally and externally. A “civil society” group calling itself the Group of 184, led by Evans Paul, Andy Apaid and Reginald Boulos among others (all now political allies or financiers of PHTK), advocated for Aristide’s ouster. Philippe, when asked about the role of the Group of 184 in the various police station assaults, responded, “I know that certain political leaders and representatives of civil society can help you with this, since they know everything about what happened … Since they’re cowards, however, they’ll just tell you that they know nothing about it.”

Meanwhile, the US and other international lenders froze assistance to the newly elected government, squeezing the Aristide administration and contributing to a rapid decline in living standards. Stanley Lucas, now an advisor to PHTK, but at the time working for the US International Republican Institute, was actively supporting the opposition. According to a 2006 report in the New York Times, Lucas led a training of the opposition in the Dominican Republic in 2003. At the time, Philippe was also at the hotel and met Lucas, though he denies they talked politics. Philippe also said he met with Lucas while in exile in Ecuador in 2000 and 2001 and that they were “good friends.”

In 2004, Philippe had joined with former members of the Haitian military, and led a paramilitary assault on the country with the stated aim of toppling the Aristide administration. Before his forces could reach the capital, Aristide was flown out of the country on a US airplane. It was February 29, 2004, Guy Philippe’s 36th birthday.

Philippe ran for president in 2006, receiving less than 2 percent of the vote. The DEA led a high-profile raid in 2007 seeking to arrest the paramilitary leader, but former Haitian government officials have questioned the US commitment to apprehending Philippe, describing the previous efforts involving helicopters and large shows of force as “theater.”

Philippe’s political ambitions got a shot in the arm with the election of Michel Martelly in 2010. The new president was a natural ally for Philippe, as Martelly made the restoration of the military a key part of the platform of PHTK, his new political party. When elections were held in 2015, the first under Martelly, restrictions on candidates’ ability to register were lifted, and Philippe declared his intention to run for Senator. The Miami Herald dubbed the likely incoming parliament “Legal Bandits,” a riff on a popular Martelly song.

Asked last summer if the US had any reaction to Philippe’s senate candidacy, US Special Coordinator for Haiti Ken Merten responded, “Haiti’s authorities must hold its own citizens accountable for any kind of election-related intimidation, violence, or threat to the stability of the country.” He dismissed questions about Philippe likely taking a seat in the Senate as “hypothetical positing.” However, with Philippe set to be sworn in on Monday -- which could put up new obstacles to arrest in the form of immunity  --  the US apparently decided to act.