The vicious circle of poverty in Haiti 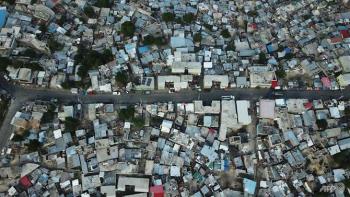 An aerial view of the houses in the neighborhood of Fort National in Port-au-Prince show how they are piled on top of one another - one indication of the city's endemic poverty. (Photo: AFP/Hector Retamal)

On the hills of Port-au-Prince, a chaotic jumble of structures stretches ever farther into the distance: Haiti's capital is suffering under the weight of high inflation, endemic corruption and a perilous drop in the value of its currency.

In the Fort-National area, barely a kilometre from the presidential palace, tiny cement-block homes and makeshift shelters fashioned from plastic and tarps line the narrow, trash-filled lanes - doused in raw sewage.

Henry Germain is asking his neighbors for odd jobs to do so he can buy himself something to eat. But there is no work.

Germain, who has been unemployed for the past 10 years, is barely hanging on, using the few dozen dollars a quarter he gets from a cousin living in the United States.

"In December, with all the holidays, I used to treat myself to some new shoes or clothes. This year, I can't do any of that. Prices are too high. All my money goes toward food," says Germain, who is 44.

Elina Jean-Louis is not wanting for clothes. Her small house - with sheets for walls - is stacked high with second-hand textiles, but she no longer goes to the market to sell her wares, for fear she will be caught in a gang turf war.

"In any event, my customers refuse to pay more, even though I am paying a lot more for clothes in bulk than I was before," says the 32-year-old woman, who adds that the hit to her business is forcing her to make sacrifices.

"Before, I used to buy chicken pretty often, but now, I cannot let myself do that. Even bananas have become too expensive for me," she says, adding that she makes sure her four-year-old son cleans his plate of rice and vegetables.

For Germain, Jean-Louis and many in Port-au-Prince, "before" means a time when the national currency, the gourde, was stable as compared to the US dollar. Since the summer, it has lost nearly a third of its value.

That devaluation has had a devastating impact in Haiti, a country that imports four times more than it exports.

For the 60 per cent of the population that lives under the poverty line, meaning they live on less than two dollars a day, the increase in prices is unfathomable. For the shrinking middle class, it's also difficult.

"Many parents have a hard time getting an education for their kids, as they must choose between putting food on the table and sending their children to school," explains economist Kesner Pharel, who worries about mounting inequality.

"This juxtaposition of villas and slums creates an explosive situation, an extremely dangerous cocktail like what we saw in July."

In July, a government bid to raise fuel prices sparked a nationwide revolt, with violence especially serious in Port-au-Prince, where looting and fires were reported. At least four people were killed in the mayhem.

Months of protests have followed.

In response to the outcry, the government has presented a budget that would double the amount of money allocated to the health ministry, while the social affairs ministry would get a 40 per cent boost.

To finance the changes, the government is banking on a 75 per cent increase in tariff income - a plan that seems to indicate a new war on contraband.

On Haiti's sole land border, with the Dominican Republic, Haiti loses an estimated US$500 million a year in customs duties.

"We're not even talking about those who cross the border on motorcycles or on foot, but just about the big trucks that travel with heavily armed men so they can just cross without declaring a thing," says George Sassine, the president of Haiti's manufacturing association.

According to Sassine, "contraband only benefits a small minority of senators, deputies and those in the private sector, as of course, the merchandise has to be sold to someone".

But the vow of silence prevails, because of shortcomings and corruption in the country's justice system - an illicit greasing of palms among the ruling class that the poorest Haitians cannot stomach.

"Politicians don't know anything about our misery. Ask them how much a bag of rice costs - they have no idea," Germain says.

"When you have money, you don't worry about it. But I'm dying, little by little. They are fattened up, and I am nothing but bones," he adds, lifting his baggy t-shirt to reveal his protruding rib cage.