Warning against foreign intervention, the movement to oust Jovenel shows no signs of weakening 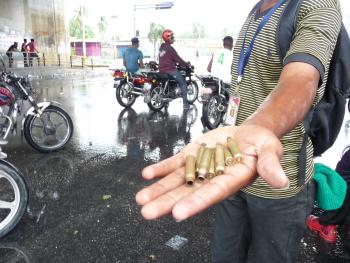 At the Nazon/Delmas intersection, a man holds the spent casings of bullets he claims police fired at demonstrators. Credit: Kim Ives/Haïti Liberté

On Sep. 29, the Belmart Supermarket in Tabarre, near the U.S. Embassy and a UN base, was jam-packed with well-to-do Haitian and foreign shoppers stocking up on food, water, and other supplies. They might have been preparing for a hurricane, and, in a manner of speaking, they were: a hurricane of popular anger and frustration that was due to arrive the next day, on the Sep. 30, 1991 coup’s 28th anniversary.

With every passing day and week, the movement to oust President Jovenel Moïse and his cronies grows in size, strength, and resolve.

Sep. 30 did not disappoint; it saw the capital completely shut down by barricades and widespread street demonstrations. Over the following two days, there were still burning barricades and scattered protests, but commerce and traffic picked up about 50%.

As if to rekindle things, on Oct. 3, the United Nations Security Council in New York (at the request of the Dominican Republic, which currently sits on the Council) held an informal “brain-storming” session on the Haiti crisis that resulted in no resolution. The next day, Fri. Oct. 4, a gargantuan demonstration of many, many thousands marched from the capital’s Nazon/Delmas Roads intersection (the traditional starting point these days) to the UN headquarters in Haiti. The demonstrators’ message: no more foreign military occupation, no more foreign meddling, stop supporting the Moïse regime.

The UN Mission for Justice Support in Haiti (MINUJUSTH) is due to finally end on Oct. 15. The departure of its 1,300 international police officers will mark the end of over 15 years of UN Security Council military control over Haiti. Last Friday’s protest was aimed at thwarting any attempt to use the current crisis as an excuse to redeploy an “international peacekeeping force” in Haiti.

On Mon., Oct. 7, another large demonstration flooded the central square, the Champ de Mars, near the National Palace, to demand Jovenel’s resignation. At about 4 p.m., a pro-regime paramilitary gunmen shot dead Edouavil Dieudonné, a young demonstrator. Enraged, the crowd set fire to a police pick-up truck and trashed a house frequented by regime friends.

As tensions and confrontations grow, so has the death toll. At least 17 people have been killed in the last four weeks of protests, and more than 200 injured, although opposition and popular organization leaders say those figures may be conservative.

Barricades go up, then a heavily armed and armored police unit creeps in to clear it away. After the unit leaves, the barricade is rebuilt. It appears a futile contest, like sweeping back the ocean with a broom.

Sometimes, however, skirmishes erupt between the police and protestors. One happened on the afternoon of Sep. 30 at the Nazon/Delmas intersection. A man wearing a TV 2000 press pass showed Haïti Liberté a handful of spent shell casings from bullets the police had fired at protestors that very day, he said.

While Haïti Liberté was there for about an hour, the police fired tear-gas grenades at protestors, who responded by throwing rocks. Many watched the battle from their rooftops. Some policemen even threw rocks back at demonstrators from the top of the overpass above the Nazon Road.

With the arrival of the new Haitian National Police (PNH) chief Normil Rameau, there has been a sharp escalation of police and pro-regime paramilitary violence, said Mario Joseph, the lead lawyer of the International Lawyers Office (BAI).

“There is a huge difference between the police conduct under former PNH chief Michel-Ange Gédéon and the new chief Normil Rameau,” he said in an Oct. 1 interview at his Port-au-Prince office after returning from Washington, DC, where he presented the problem on Sep. 23 to the Inter-American Commission on Human Rights (IACHR). “Rameau has only been in office about a month, but already there has been a marked increase in summary executions… Normil Rameau is someone that Jovenel Moïse put in place to help him carry out repression.”

Rameau also appears to be working hand-in-hand with paramilitary death-squads, Joseph said, a scourge that has dogged Haiti’s democratic struggle since the Duvalier regime’s 1986 fall. An example is the Sep. 28 murder of Josemano “Badou” Victorieux, the leader of Baz 47 (47 Base) in Delmas, a popular organization. Badou was gunned down near Rendez-Vous 33 Resto in Delmas 33. “This kidnapper regime’s henchmen assassinated him for demanding change for the Haitian people,” said Mackenson Desrosiers, a Baz 47 member, sitting on a stoop just off Delmas 47 with his comrades.

Baz 47 is affiliated with the Dessalines Children party of former Sen. Moïse Jean-Charles, who said that six of his party’s militants were killed between Sep. 23-29.

Also on the night of Oct. 7, unidentified gunmen fatally shot Bénisson Benoyer, 18, in the capital suburb of Tabarre 51. Benoyer’s family and friends charge the crime was committed by a police patrol from the local Tabarre precinct.

Despite its tenacity, the movement to oust Jovenel remains largely spontaneous and uncoordinated. There is no single guiding party or organization. The masses tolerate but are not enamored with the two principal opposition fronts: the Consensual Alternative for the Nation’s Refounding (previously the Democratic and Popular Sector) and the Patriotic Forum of Papay. The former counts in its leadership Sens. Youri Latortue and Joseph Lambert, both former close allies of Jovenel Moïse and infamous for their corruption.

The two senators represented the Alternative at a meeting in Pétionville on Sep. 30 with the “Core Group,” as are called the ambassadors of nations and institutions allied with Washington. The “Core Group” is made up of the ambassadors of the U.S., France, Germany, Brazil, Canada, Spain, the EU, and the special representatives of the Organization of American States (OAS) and the UN Secretary General.

The meeting’s purpose was to fashion a solution to the crisis in conjunction with the very powers that helped bring Martelly’s and Jovenel’s Haitian Bald-Headed Party (PHTK) to power. Watching such negotiations, the masses are justifiably distrustful.

“We have a rotten opposition, which preaches that we should concoct solutions in concert with the imperialists and reconcile with the bourgeoisie, both of which foisted this corrupt, bloody PHTK regime on the Haitian masses,” said Oxygène David, the secretary general of the National Movement for Liberty and Equality of Haitians for Fraternity (MOLEGHAF), based in the gritty hilltop slum of Fort National. “The masses unfortunately have not yet been able to forge their own vanguard, so scoundrels and opportunists currently have the leadership, proning class collaboration. We denounce that, and that is why they marginalize us and other revolutionary organizations.”

One of the busiest members of the bourgeoisie has been Réginald Boulos, who supported the 1991 and 2004 coups and saw his stores burned by angry demonstrators last summer when this latest uprising began. Since then, he has sought to convert himself into the masses’ champion, launching a political party called the “Third Way.”

Boulos has allied himself with the Alternative and the Forum fronts and has distributed lots of money to popular organizations in Cité Soleil, the capital’s largest slum and spring of rebellion.

“We in MOLEGHAF denounce this so-called ‘Third Way’ as merely a way to trick, combat, and destroy the working class seeking to build its own vanguard,” Oxgène said. “We denounce this phony, demagogic opposition, both the Alternative and Forum of Papay, which are working with Boulos and their program of class collaboration, which is only aimed at allowing Boulos to maintain political power and even try to become president.”

There was another sign that the local and international bourgeoisie is alarmed and abandoning Jovenel. This week the American Chamber of Commerce in Haiti (AMCHAM) put out a hand-wringing note that the Haitian people have been “taken hostage by a political war,” causing “ an unprecedented deterioration of the national economy which is gradually destroying the formal business sector.”

“The path is clearly drawn to bury our homeland in misery, insecurity, and total anarchy, because the approach chosen so far has unfortunately failed,” AMCHAM concluded.

The alarm even is being felt overseas in Miami, where House Speaker Nancy Pelosi attended a Haitian community meeting hosted by Rep. Frederica Wilson on Oct. 3.

The meeting began with mostly vapid politician remarks by Pelosi, Wilson, Monestime, and Joseph. But then it erupted (much to Pelosi’s discomfort) into a trial of and outcry against U.S. policy in Haiti, beginning with remarks by Karen André, the daughter of famed protest singer Farah Juste, who was in the audience.

“I am unapologetically on the side of those beleaguered, long-suffering masses… who, for the last century, have been dealing with intervention, imperialism, meddling, and all manner of corruption, and lack of respect,” she said to a cheering audience.

“Since 1804, [the Haitian people] have had one message: respect our sovereignty,” she continued. More recently, “they have been asking ‘Where is the PetroCaribe money?’ There is a whole movement which has been built around that question.”

She went on to needle Pelosi about “the killings, the massacres, the extra-judicial killings that are happening with impunity” and “with weapons that are U.S.-made, entering the country by mysterious means, and killing the activists which are raising their voices and demanding change.”

With the tone set, Carline Paul continued the prosecution. “America has kept [the Haitian people] in a box… [The people] say this time the revolution is going to happen. They do not want America to send any troops in Haiti, and they want Jovenel Moïse to go.”

Then Paul really hit a nerve when she charged that the Trump administration “is supporting Jovenel Moise for voting [at the OAS] against [President Nicolas] Maduro in Venezuela.” But Washington “didn’t like it, because Venezuela has helped Haiti” and then the Haitian government was “forced to vote against Venezuela.”

FANM’s Marleine Bastien also made a jab at Pelosi’s Democrats by saying “if there is a Jovenel Moïse today, Speaker Pelosi, it’s because there was a Michel Martelly who was hand-picked by some of our friends,” a not-so-veiled reference to then-Secretary of State Hillary Clinton’s January 2011 visit to Haiti, which resulted in Martelly being put into the run-off, which he won.

Echoing the other three women, Gepsie Metellus said: “We can say that today what you see unfolding in the streets of Port-au-Prince is just the result of years… of political meddling, of economic meddling, of all the meddling that you can think of. And I think the frustration is blowing up.”

As the meeting closed, Pelosi felt compelled to present, quite incoherently, the joint Democrat/Republican posture towards any revolutionary government in Latin America. She was responding particularly to Paul’s remarks. “You’ve been candid, and I’m going to be candid,” Pelosi said. “Maduro is a thug, so I’m not taking any respect for what Maduro might be doing in Haiti (sic). I’m glad that there may be some benefit, but I’m not… erasing the injustices, the horror, the killings that he is doing in Venezuela because he is part of spreading a global and certainly a hemispheric exporting corruption and the rest (sic).” As the room remained stonily silent, she added: “Not to get involved in a full-fledged discussion about Maduro, but I can’t leave a meeting where you’re saying… I cannot let my view of Maduro go unspoken in a group of this kind.”

It was evident that in Miami, as in Haiti, most Haitians clearly see and understand the diametrically opposed roles played by Washington and Caracas. The former has consistently supported corrupt, exploitative, and repressive regimes over the past century and trampled Haiti’s sovereignty, while the latter has offered exemplary solidarity, empowerment, and respect to the Haitian people. Today, Trump, Pelosi, and Jovenel all condemn and fight Maduro and the on-going Venezuelan revolution.

Pelosi may have summed it up best in a statement after the meeting: “It’s about American leadership in the world. I don’t consider it meddling.”